The Fall of Communism in TV’s The Weissensee Saga

Walter G. Moss is a professor emeritus of history at Eastern Michigan University a Contributing Editor of HNN. For a list of his recent books and online publications, including those on Russia, click here. His most recent book is In the Face of Fear: Laughing All the Way to Wisdom(2019), which treats humor from a historical perspective. 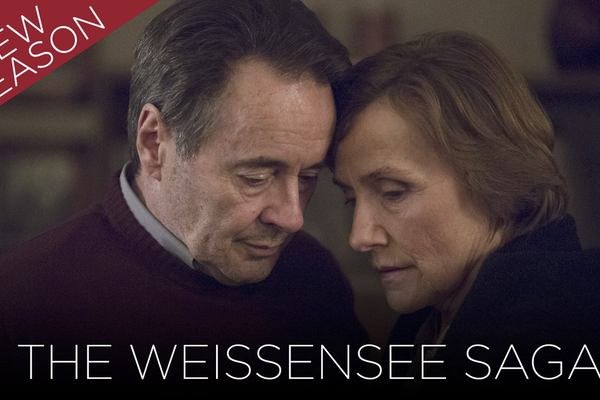 Among the numerous TV offerings available for streaming is The Weissensee Saga, a first-rate 24-episode German production now available on MHZ. Like Thomas Mann’s German novel Buddenbrooks  (1901), it has all the qualities required of a good multi-generational saga. The TV episodes (each about 49 minutes) contain love and jealousy, good acting, suspenseful plotting, and picturesque and interesting settings. But they also offers viewers, especially those interested in history and communism, excellent insights into the final decade of East German communist rule, including its collapse in 1989-1990, and the reunification of Germany (1990). In that Communist parties collapsed throughout Eastern Europe and the Soviet Union from 1989 to 1991, the saga depicted in East Germany provides valuable reflections on an even wider scale.

But first, many viewers who are not very knowledgeable about Eastern European history can benefit from knowing a few background facts.

A leading expert on German-Russian relations, Angela Stent, has written that the GDR was “a state that never enjoyed popular legitimacy and whose most successful industry was spying, not only on West Germany, but on its own people.” This is a fitting introduction to The Weissensee Saga because the main family around which the series revolves, the Kupfers, contains two members of the Stasi, the German equivalent of the Soviet KGB, father Hans and oldest son Falk. Another prominent family, the Hausmanns, containing mother (famous singer-songwriter Dunja) and daughter (Julia), are victimized in different ways by the infamous Stasi. (An interesting coincidence is that from 1985 to 1990, when most of the TV saga is set, KGB agent Vladimir Putin was stationed in Dresden, East Germany, but the series does not mention him.)

What happens to the singer Dunja (played by the East German actress Katrin Sass) is typical. Like major cultural figures in other communist countries, she is forced to cooperate with communist authorities if she wishes to enjoy certain benefits, like traveling and performing in the West (West Germany in her case). The Stasi, including Falk Kupfer, employ various methods like bugging her apartment to make her more accommodating. These security police also employed torture and other means of “persuasion.” Actress Sass had her own personal experiences with the Stasi, no doubt aiding her in presenting her convincing Dunja portrait. Another major actor—Uwe Kockisch, who plays Hans—was once imprisoned for a year for trying to escape from East Germany.

The experiences of Sass and other actors in the saga bring to life the words of historian Tony Judt:

The Communist regimes did not merely force their rule upon a reluctant citizenry; they encouraged people to collude in their own repression, by collaborating with the security agencies and reporting the activities and opinions of their colleagues, neighbours, acquaintances, friends and relations. . . . The consequence was that while the whole society thus fell under suspicion—who might not have worked for the police or the regime at some moment, even if only inadvertently?—by the same token it became hard to distinguish venal and even mercenary collaboration from simple cowardice or even the desire to protect one’s family. The price of a refusal to report to the Stasi might be your children’s future. The grey veil of moral ambiguity thus fell across many of the private choices of helpless individuals.

Living in a nice house on a picturesque lake, the Kupfer family enjoys the privileges typical of the communist elite—father Hans has a high position in the Stasi and son Falk is an ambitious and rising force within it. The other son, Martin (East-German-born Florian Lukas), begins the series as a member of the regular police force, much less prestigious than the Stasi, but eventually quits, having soured on his duties, which included suppressing any activities disapproved of by the communist authorities.

As social turbulence increases in East Germany in the late 1980s, partly due to the Gorbachev effect on Eastern European communist countries, members of the Kupfer family react differently. In one scene Hans approvingly watches Gorbachev on TV. Falk, both a careerist determined to get ahead and a defender of hard-line communist ways, is much less sympathetic to the Soviet leader’s reforming ways. Martin is the least political of the three. The disorienting effect on youth of the collapse of communist power in East Germany, coupled with German reunification, is also well illustrated through two of the youngest generation, Falk’s son Roman and Martin’s daughter Lisa.

The three older Kupfer men all have their marital difficulties. Hans once had an affair with Dunja Hausmann, and his wife, Marlene (Ruth Reinecke), remains suspicious of her.  Falk’s wife, Vera (Anna Loos), grows increasingly unhappy with him and eventually leaves him and becomes a dissident against the dying communist regime. From the beginning, Martin is divorced from his wife and begins a romance with Julia Hausmann. All three Kupfer women play important roles in the saga, as do two other women who will later become involved with Falk and Martin.

The new woman in Falk’s life in later episodes is physiotherapist Petra Zeiler (Jördis Triebel), who earlier in her life was interrogated by the Stasi and imprisoned. Martin becomes involved with Katja Wiese (Lisa Wagner), a West German journalist.

In the saga’s last dozen episodes, set in the crucial years 1989-90, East German relations with West Germans become increasingly important—the Berlin Wall is demolished in November 1989. For example, as the communist government collapses and with it the Stasi, Falk goes to work for a West German insurance company wishing to expand into eastern Germany, and is also blackmailed into providing information to the CIA. Martin’s furniture company, adversely affected by currency changes connected with German reunification, turns to a West German financier for advice. Martin’s former police partner, Peter Görlitz (an often humorous Stephan Grossmann), starts selling used cars.

As in other parts of the collapsing communist world of 1989-1991, financial reforms and what to do with all the state-owned assets becomes a crucial question, and Falk’s ex-wife, Vera, works for an agency dealing with privatizing some of these assets. Prior to this, she had become active as a dissident and later political candidate in 1990 elections. (She had also become involved with a Lutheran pastor, who falls into the hands of the Stasi and her ex-husband Falk.)  Attempting to retain East German communist assets are Falk’s mother, Marlene, and Hans’s former Stasi boss, the evil Günther Gaucke (Hansjürgen Hürrig).

The most impressive educational aspect of The Weissensee Saga is that it presents a realistic and convincing portrait of the differing lives and reactions of East German individuals in the final decade of the GDR’s existence. In that the experiences of East German politicians, officials, and other citizens were similar to that of individuals in other eastern European communist countries, including the USSR, we also gain insights into what mattered to them, for example, financial changes; more freedoms, including less government restraints; and personal transitioning from one economic-political-cultural system to another—like the East Germans, Russians such as Vladimir Putin had to make such a transition).  Along with MHZ’s even longer series, the World-War-II-72-episode A French Village, The Weissensee Saga  now springs to the top of my favorite TV fictional historical sagas.