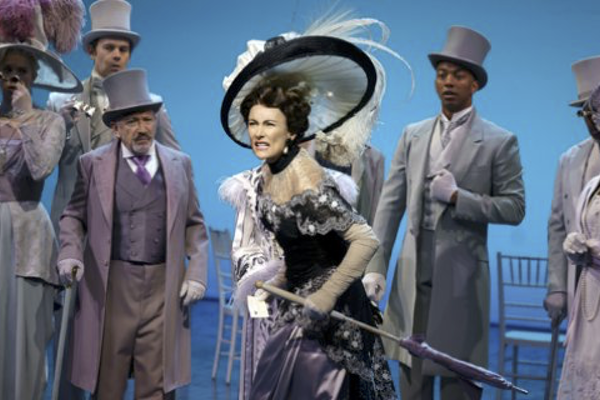 I don’t know where it was in the new Broadway production of the musical My Fair Lady that I decided it had to be the greatest musical of all time. Was it the early song Wouldn’t It Be Loverly, that introduced you to the lower-class world of spritely and lovable cockney flower girl Eliza Doolittle? Was it the rowdy With A Little Bit of Luck, in which you meet Eliza’s boisterous dad? The forever rhymning The Rain in Spain? On the Street Where You Live? I’ve Grown Accustomed to Her Face? Get Me to the Church on Time? The rousing, fabulous oh-my-God spectacular I Could Have Danced All Night?

Was it all of them?

I don’t know, but somewhere amid those unforgettable songs, sensational acting and magnificent sets at the revival of My Fair Lady at New York’s Lincoln Center, I made up my mind. I fell in love with the musical, now celebrating its first anniversary at Lincoln Center, all over again.

The musical, with book and lyrics by Alan Jay Lerner and music by Frederick Loewe, is set in London during Edwardian England (1900 – 1910) and based on George Bernard Shaw’s 1913 play Pygmalion. It is the story of street-wise Eliza, she of the irritating shrill voice and pronounced accent, and her efforts, under the tutelage of the esteemed, sophisticated phonetics professor Henry Higgins, to “become a lady.” Higgins is so sure he can turn raffish Eliza into a proper lady and debut his new creation at the fancy elegant Embassy Ball that me makes wagers on it.

He succeeds. He brings Eliza into his house to live and study, keeps her up until all hours of the night repeating word and phrase pronunciations hundreds of times, buys her dresses and hires her carriages. He brings her to the upper crust races at Ascot, the Embassy Ball and other public places. In the end, he has made the frisky, unkempt flower girl a member of high society, with a gorgeous wide-brimmed Merry Widow hat, expensive gowns and exquisite taste.

At what cost, though? Can the “new” Eliza, the belle of the ball and consort of Queens, ever go back to the streets, flowers bunched up in her hands? Can she ever hang out with her Dad and his raucous drinking buddies again?

Will she marry Higgins, who by the middle of the play is obviously in love with her? Will she eventually run his household full of expensive furniture and hard-working maids? Will her new-found friendship with Colonel Pickering continue?

This revival of My Fair Lady is a stunner. The play has it all. First, the music. Was there ever a more memorable song that I Could Have Danced All Night? A better love song that I’ve Grown Accustomed to Her Face? A better scene stealer, play stealer, history of the theater stealer than the voluptuous, bouncy Get Me to the Church on Time, which sprawls all over the stage at Lincoln Center as the roars of the audience get louder and louder?

The roles of Eliza and Henry Higgins are two of the best written roles in theater history. Eliza is the old street girl who, introduced to the high life embraces it, but with a desperate yearning for the old gang from the neighborhood. She works hard at becoming a lady and achieves her goal. Henry Higgins is an intellectual, a devoted bachelor and a man who has been successful – all alone—for his entire life. Can he survive the commotion caused in his life by the whirling dervish Eliza? Could anyone?

Laura Benanti is nothing short of dazzling as Eliza and is at her best as she belts out I Could Have Danced All Night. She grows in the role and by the end of the play you never, never think she had been a blustery flower girl. She has a gorgeous voice and is a superb actress. She also plays well in scenes with others, particularly those with Higgins and with his mother. Harry Hadden-Paton is a complicated Higgins. He acts well and sings well, but his strength is the way he looks at Eliza and dotes on her, even if a bit gruffly. He shows her off and is proud of her, but at the same time just does not know what to do with her.  Hadden-Paton has a moment early in the play when he looks at Eliza and keeps moving, with small steps, to see more of her. His uncertainty about the flower girl is the perfect sign of his love, his surprised love, for the flower girl. Hadden-Paton and Benanti are a delightful pair.

Other fine performances are from Christian Dante White as Freddie Eynsford Hill, who falls for Eliza, Allan Corduner as Colonel Picking, Higgins’ assistant in the make-Eliza-lady college, Alexander Gemignani as Eliza’a father, Alfred P. Doolittle, who prances, dances and, in high spirits, boldly struts across the stage, hat in hand. Rosemary Harris is a delight as Higgins’ mom, who chastises Eliza when the girl throws slippers at her son, “I would not have thrown slippers at him; I’d have thrown fire irons.”

Some critics have written that it is now Eliza’s play, that director Bartlett Sher has made Eliza the centerpiece at last. No. It is still the story of both Higgins and Eliza, an historical pair if there ever was one. What director Sher has done, brilliantly, is highlight all of the characters sin the play, large and small, to create a richer and deep portrait of London just before the first World War. He is aided by the remarkable choreography of Christopher Gattelli.

The play opened on Broadway in 1956 and was an immediate hit. It was turned into an Oscar winning movie in 1964, starring Rex Harrison as Higgins and Audrey Hepburn as Eliza. It was then, and now, a rich history lesson for patrons about Edwardian England and its high society, low society. customs and traditions.

The play, and the 1964 movie,  produced a perfect re-creation of  Ascot race course traditions and dress, right down to the wide brimmed Merry Widow hats the ladies wore (yes, that’s the scene when prim and proper Eliza, unable to take the slow pace of the horse she bet on any longer, shouts out at the horse in her best high society language, “Move your bloomin’ arse!).

You learn of the customs and style of the Embassy Balls, with their personal introductions, stilted etiquette, chats with the Queens that turn up, men and women’s’ fashions and music. You also get a terrific lesson in the look of the street, with the grimy flower girls and men, many out of work, that hung out around the theaters, bars and other public buildings. Edwardian clothing at its best is showcased in the play, right down to the fancy off-white suits and hats of the men, who cavort through the night, too, in their black tuxedoes with white silk scarves draped around their necks.

Everyone sees the enormous difference between the first-class folks at the Embassy Ball in 1910 and the scruffy street people in third class London. The gap between the is three million miles and no song could bridge it - then or now.

It was the heady days just before the start of World War I in England and America, an event that changed everything.

There has to be much applause for the magnificent revolving stage set by set designer Michael Yeargen. He built a scrumptious, dark wood finish home for Higgins, complete with a spiral staircase and rooms everywhere. As the massive stage turns slowly, you see the tiny bedrooms of the maids float past you, along with gardens and trees with maids hanging on to them. It’s one of the best sets I have ever seen.

If you can get yourself to Lincoln Center, and to Edwardian England, and need some flowers, go see Eliza, Henry Higgins, Colonel Pickering and even the Queen of Transylvania. They will have you dancing all night, and adoring it.