A Fresh Take on Watergate Illuminates the Present 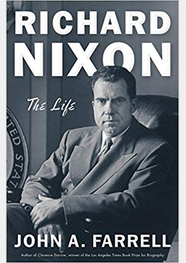 As evidence of illegal activity in the recent presidential election mounts, the attorney general appoints a special prosecutor. The president, after denouncing the news media for false reporting, calls a press conference to insist he has done nothing wrong.  In court hearings, evidence of campaign dirty tricks and secret pay-offs emerges and a growing chorus of Congressional Democrats call for impeachment proceedings.

While these could be scenes from recent CNN coverage, they actually come from 1973-4, the last years of the Nixon presidency.

Washington journalist John Farrell’s book, Richard Nixon, a Life, provides a fascinating narrative that takes the reader inside the mind of a troubled president who is obsessed with taking down his perceived “enemies.”

Farrell, a former White House correspondent for the Boston Globe, has written two previous books including Tip O’Neill and the Democratic Century; he brings a deep understanding of Washington D.C. culture and an eye for telling anecdotes.

Farrell’s book is focused exclusively on Nixon, concluding with his death in 1994, and never mentions Donald Trump. However, readers will inevitably reflect on the current presidential crisis as the author leads us through the racist rants, paranoid visions and surreal plotting against opponents that was a regular feature of Nixon’s White House.

While Richard Nixon’s rise and fall has been repeatedly examined — there are more than a dozen biographies of him — Farrell’s account offers many new insights. He has tapped into a rich trove of new material, drawing from the 37,000 hours of White House tapes (many held in secret until 2013), 400 oral histories from Nixon associates compiled by Whittier College and books such as The Haldeman Diaries.  Farrell has combed through these voluminous files to craft a day-by-day account of how the Watergate fiasco unfolded.  By weaving together key taped conversations and candid observations from his close associates, he provides a day-by-day, sometimes hour-by-hour, account of the dark world of Richard Nixon’ restless mind. Farrell shows his obsession with “enemies” who include Jews, blacks, Democrats and Ivy League “eggheads.”

Both men had a distant mother and demanding father, both endured the death of a favored older brother and both harbored deep insecurities that led to driving ambition and a “win-at-any-cost” attitude. Both men displayed an unnatural sensitivity to criticism and an obsession with striking back at perceived enemies. Both tried to conduct their affairs in deep secrecy, obtained money from dubious sources and hired unsavory characters to carry out their dirty work for them.

While the basic facts of Watergate have been recounted many times most notably in the book and film of All the President’s Men, these are primarily views from the outside. Farrell’s book takes us inside the White House, detailing the daily interactions of Nixon and his closest lieutenants, Haldeman, Ehrlichman and Kissinger. We see Nixon’s restless mind, mulling foreign policy initiatives and the domestic political scene, but also returning time and again to “getting even” with his enemies, real and imagined.

The first years of Nixon’s presidency, 1969-70, were largely successful. He began to wind down the Vietnam War, he ended the draft, lowered the voting age, began nuclear weapons limitation talks with the Soviets and founded the Environmental Protection Agency. Although he enjoyed high favorability ratings and seemed assured of re-election, he railed against anti-war protesters and exploded in anger when critical articles appeared in the press.

Sometimes, his impulsive reactions to news events were irrational.  After a Middle East airplane hijacking, he demanded the Air Force bomb Damascus, Syria. Fortunately, his staff and cabinet officers ignored this and other dangerous thoughts and Nixon usually forgot about them and moved on to other subjects.

Haldeman and Ehrlichman, whom the press dubbed “the Pretorian Guards” of the administration generally acted as filters, screening out Nixon’s most irrational instructions before they reached lower-level personnel.  Unfortunately, after two years, they suffered from overwork, became distracted and allowed the formation of “The Plumbers,” a group of a dozen ex-spies and free-lance thugs recruited to stop internal leaks and gather damaging material on opponents.

The calm at the White House was shattered on June 13, 1971, when The New York Times published a 5,000-word excerpt from The Pentagon Papers, a 700-page study of the origins and conduct of the Vietnam War. It had been taken from the Defense Department by one of its authors, Daniel Ellsberg.

Ironically, Henry Kissinger’s immediate reaction to the story was one of relief. “This is a gold mine,” he told Nixon, “It pins it all on Kennedy and Johnson.”  But the president Nixon reacted differently. He saw it as part of a conspiracy, a plan to bring him down. He worried that other documents might be leaked, ones that revealed the dark secrets of his Vietnam War policies: the clandestine carpet bombing of Cambodia, the plans for bombing dikes in North Vietnam and the consideration of atomic weapons.

Nixon now pressed harder than ever for retaliation, demanding widespread wiretapping and burglaries to obtain opposition files. Earlier restraints on the Plumbers and other operatives were lifted.

At 3 a.m. on June 17, 1972, a team of burglars, headed by Gordon Liddy and E. Howard Hunt, clad in business suits and surgical gloves, was arrested after breaking into the Democratic National Headquarters in the Watergate office complex. The Washington Post assigned a pair of young reporters, Bob Woodward and Carl Bernstein, to cover the story.

This began the two-year long Watergate scandal that would force Nixon out of office. By July 1974, the House Judiciary Committee approved three articles of impeachment against Nixon: for obstruction of justice, abuse of power and contempt of Congress. The full House was getting ready to conduct formal impeachment hearings when Nixon resigned on August 9 and Gerald Ford became President.

Karl Marx famously wrote in 1852 (commenting on the dictatorship of Napoleon III in France) that “history repeats itself, first as tragedy, then as farce.”

In the course of Donald Trump’s presidency, with its illegal campaign activities and defiance of Congress, history is repeating itself.  So far, it is a farce, but it could quickly turn into a tragedy.

Richard Nixon, A Life provides a fascinating, insight into a 20th century presidential crisis. In 1974, our Constitution and the division of power among the three branches of government was severely tested, but it survived intact. Now, in the 21st century, we can only hope for a similar, successful outcome.