Dr. Seán Williams is a Lecturer in German and European Cultural History at the University of Sheffield's School of Languages and Cultures. 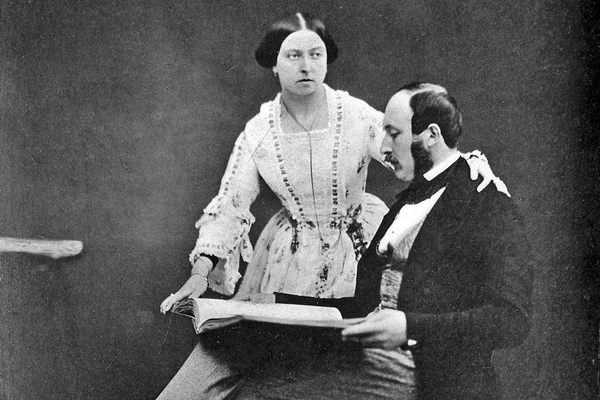 200 years ago, a German petty princeling was born. Little Albrecht came into the world in what is now Bavarian hinterland, in a summer residence that had recently been revamped in Gothic Revival Style. A second son, he missed out on being heir to a diminutive duchy that was about the size of the Isle of Wight.

In 1819, “Germany” was a confederation of sovereign states that were mostly run by many royal families. Thus, the birth of yet another royal mustn’t have seemed all that historically significant. But this year historians, tourists, and a fair few locals will be celebrating in Schloss Roseau. In Newcastle, meanwhile, visitors to the Laing Art Gallery can view watercolours of this beau, and slightly embellished, “castle” — on loan from the Royal Collection.

Why the celebration? Because aristocratic Albrecht grew up to become Albert, husband of Queen Victoria of England.

In the age of Victoria and Albert, the Prince’s German-ness was a PR problem. Today, it is welcome soft power in politically hard times. In May, on what had been planned as a post-Brexit visit, Prince Charles was sure to mention the legacy of Albert. Over a century before, Queen Victoria had tried to tone down Albert’s teutonic traits: she worried about British prejudice. Germans were seen as serious, pedantic, and in search of power abroad.

A biography of the Prince commissioned by the Queen portrays him as an English witto avoid such stereotypes. In his student days he was apparently good at comic impressions, which “a University, especially a German University, with the oddly accentuated ways of its professors, can never fail to supply.” Behind the managed public image, though, in private Victoria and Albert wrote to each other in earnest — and in German.

Despite the Germanophobia or Germanophilia that has surrounded Albert, it’s debatable how much he embodied the Germany of two centuries ago. Born into a contemporary culture famous for its poets and philosophers, once in Britain Albert became Chancellor at Cambridge. He’s credited with bringing the university into competition with the continent’s most reputable establishments — in Germany. But Albert wasn’t a bastion of German Bildung, or education, himself. In Bonn he followed a standard syllabus for his noble sort, rather than embrace any republic of letters. He did, however, attend lectures by a luminary of German Romanticism: August Schlegel. He didn’t insist on either a reserved seat or being addressed formally at the start of the hour — unlike pompous princely peers. Though perhaps acting as one of the people allowed Albert to skive off without much notice.

If Albert wasn’t a token German intellectual, neither Dichter nor Denker, in domestic life he was more typically Germanic. His and Victoria’s palaces were decorated with Christmas trees — although these were first introduced by earlier German British royals, those Georgian Hanovarians — and guarded by dachshunds called Waldmann and Waldina. And Albert loved German Lieder, or classical songs: he would play on a Buckingham Palace piano and sing as Victoria and even Mendelssohn joined in.

Princes like Albert were the period’s major German export. Germans had long set up royal houses abroad, and the provincial German aristocracy already married internationally. Victoria and Albert were cousins, after all. But two foreign monarchies came from the diminutive duchy of Saxe-Coburg-Saalfeld in the early nineteenth century, which still exist today: in Belgium, Albert’s uncle took up the throne; in Britain, Albert gave his name to Victoria’s line of succession. It was in this way that the tiny German territories expanded, in what was otherwise an era of global empires.

Albert’s father, Ernest, had been given an additional petite principality at the Congress of Vienna in 1815, yet he found “Lichtenberg” to be a bit of a burden. So he sold it to the Prussians without consulting either the people of the place or his own, nominal parliament in Coburg — in a move Donald Trump would surely admire. While Ernest focused on ruling his lands closer to home (in reactionary fashion), his brother, son, and nephews were shipped away in the name of the family. Just like their becrowned German colleagues. The strategy that worked in Britain and Belgium was less successfully rolled out in other countries, however. Prince Otto, second in line to the Bavarian throne, was made King of Greece — until he was deposed. Maximilian I of Mexico arrived as the younger brother of the Habsburg Emperor, and was soon executed.

A motley collection of mini-monarchies is hardly our stock image of Germany. But it defined most of German history. Britain is part of this legacy. What’s more, the German royalty of these times — such as Albert and his relatives — have survived longer abroad than in Germany, since they abdicated there en masse after the First World War. Gloria von Thurn und Taxis, of a House that was made princely because it ran an efficient postal system, has reigned only over the parties of 1980s high-society — and has now switched her allegiance to high priests, and reportedly Steve Bannon.

There’s an exception to this German royal rule of thumb. Last month, Liechtenstein celebrated its national day as a German-speaking monarchy, a micro-state even smaller than the Isle of Wight. Although exceptional in the present, in the past Liechtenstein was exchangeable with the likes of Saxe-Coburg-Saalfeld, or for that matter Lichtenberg. The story goes that Prince Philip once painted watercolours on Liechtenstein’s mountainside. Whether true or not, imagine the scene for a moment: as a small, pretty, and provincial Schloss. That would symbolise both British royal and German cultural history of Albert’s age, which in 2019 is — somehow — still alive.