Hooray for the Return of Downton Abbey! 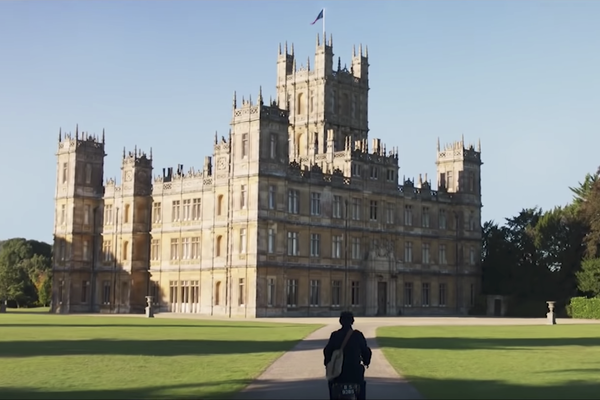 The hit television series set in the early 20th century, Downton Abbey, that portrayed the lives of the royal upper crust British Crawleys and their lovable servants just after the tragic 1912 sinking of the Titanic, left the air after six splendid seasons, leaving millions of fans worldwide bereft, inconsolable and all alone in the world.

Now, thank God, Downton Abbey is back, and back with a roar that will shake everyone from 1927, when it is set, to those who awaken tomorrow morning.

The Downton Abbey movie, which is sure to set box office records (the 1:45 p.m. Friday screening at my neighborhood theater, that I attended, was sold out), is not a separate film, but, really, another episode, a gorgeous episode, in the six year saga. Everything, and everybody, picks up where they left off - sneers, gossip, schemes and all - and carries the audience back in history to Downton’s romantic past.

Downton, that opened Friday,  is certainly one of the most celebrated movie openings ever. NBC-TV aired a one-hour preview of it last week. Dozens of local television stations around the U.S, have aired similar shows. There are hundreds of dinners and luncheons around the country to celebrate the return of the Crawleys and the downstairs help. Most of all, there are teas. The teas are a significant part of Downton Abbey and the British people in general, and last week and all of this month, towns around the U.S. are hosting teas for movie fans.

The splendid film, which is, even in its dullest moments, and there are few. just wonderful, opens in 1927 and everyone at the Abbey is aghast when they learn that the King and Queen are going to visit the Abbey on their upcoming tour of Yorkshire, followed by a grand ball nearby. The Abbey is informed (not politely at all) that the King’s servant staff and footmen will do all the work that the beloved staff of Downton usually does and that the servants and footmen of Lord and Lady Grantham are to be booted down the hall. The King and Queen are coming and they are to be ignored.

Well, they all agree with stiff upper lips, raised eye brows and plots galore, we’ll see about that!

The staff coaxes Mr. Carson out of retirement, circles the British wagons and prepares for battle.

That kicks off the movie, whose screenplay was written by Julian Fellowes, who wrote the TV series. In it, as in the television series, the star is not any one of the actors, even the dominatable old dowager Maggie Smith, but the stately HIghclere Manor that serves as Downton. The Abbey, with twice as many rooms as the White House, sits on 5,000 acres if luscious green English countryside. With its flag flying in the Autumn breeze, it is a constant, historic reminder of a time in England just after World War One, when the rich lived in their own world, with an army and navy of servants, and people bowed and curtsied to them.

Why did people all over the world, most of whom are certainly not rich, love series so much? Well, it is hard to say, but the reasons they loved the TV show are the same ones why they will love the movie.

The Crawleys, the family that lives in the Abbey, represent refined, sophisticated nobility at its best. They are the guardians of an upper crust, likable British past. The servants, who toil day and night beneath the Abbey, run it like a clock, and, with their employers, create a subterranean world of people who are thoroughly enjoyable – your best cousins, if you will. The British always complained that the real lives of the servants for people like the Crawleys were not that good, but, hey, this is entertainment, right?

Americans loved the show because we can root for the underdogs, the servants, and at the same time cheer for the Crawleys, who seem like good chaps to us. Added to all of that there were, and are, dozens of intriguing and emotional plots and subplots that kept us glued to the telly every Sunday night for years.

Most of the main characters are back in this movie and there is a rabbit warren of plots and subplots. You want romances? Oh, there are a half dozen of them. There are royals loving royals, servants loving servants and even a gay love affair.

There is a lot of history in Downton Abbey, if you pay close attention. The King laments the start of political trouble with the Irish that will last for decades as well as a strike that has crippled industry in Britain. It is 1927 and while life is as giddy in England as it was in the U.S. there are rumblings of future woes. There is a nod to the gay community with a party at a secret nightclub near the Abbey that nearly spells disaster for some of the Abbey folks.

There are expensive cars roaring down the roadway wherever you turn, with a few motorcycles tossed in. There is a marvelous scene that shows a military regiment saluting the King. There are evil plots (no spoilers here) and personal tragedies (no spoilers here, either).

As the movie passes its midway point, you sit back and are totally immersed in it, and in love with it. All of the heroes behave s heroically as they used to, and the villains are put down properly – and before tea is served.

The main plot, the revolution of the Abbey staff to host the royal family staff to serve dinner, is a witty and colorful circus of delightful trickery.

Michael Engler is the director of the film and he does a fine job of keeping the glowing tradition going. He oversees a hardworking and charming cast. They include Hugh Bonneville as Lord Grantham, Michelle Dockery as Lady Mary, Tuppence Middleton as Lucy Smith, Elizabeth McGovern as Lady Grantham, Allen Leech as Tom Branson, Phyllis Logan as Mrs. Hughes, Sophie McShera as Daisy Mason, Imelda Staunton as Maude Bagshaw, the ever in-charge Jim Carter as Mr. Carson, Lesley Nicole as Mrs. Patmore and Kevin Doyle as Joseph Molesley.

And, course, at the top of the list is ever-conniving Violet (Maggie Smith), the wickedly delightful Dowager Countess, whose acerbic barbs can be felt on both side of the Atlantic.

In the end, as in the end of the series, all is majestic calm. The camera floats up in the sky and you see the Abbey in its glory one last time. Or do you?

You wonder – will there be a sequel movie?

Is the Pope Catholic?

Does the sun rise in the East?