A Tale of the Great Migration 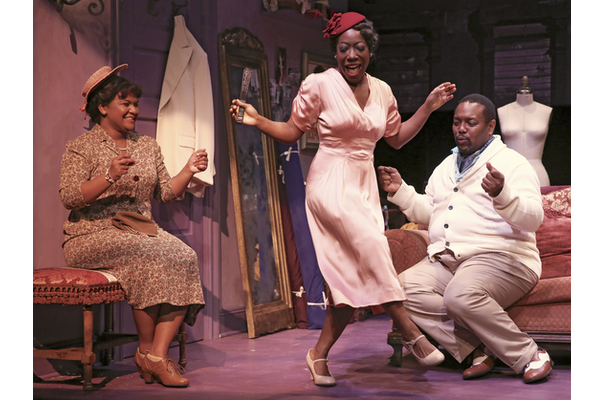 From the end of World War I to the 1960s, several million African Americans in the South migrated to the North to escape the Jim Crow racism of the South and violent oppression by the Ku Klux Klan and other hate groups. After World War I, too, there were thousands of new jobs for blue collar workers in northern cites. African Americans moved to a number of places, and New York City, particularly Harlem, became the new home for many of them. They were attracted by its culture, it unfolding literary scene and racial freedom, in addition to jobs. In the 1920s, they developed the Harlem Renaissance, a cultural era that has been shown in numerous plays, novels and movies. Harlem was home to the great bands and singers, plus noted writers.

Blues for an Alabama Sky, a new play by Pearl Cleage, tells the story of a handful of those people. It is a deep, rich play in which their stories are carried out against the cultural backdrop of the Harlem Renaissance. They are not part of it, just people who live on its perimeter, bystanders. It is an engrossing, poignant play that is a lesson in humanity – everybody’s. The play opened last night at The Theater Row, W. 42nd. Street and Ninth Avenue, in New York.

The plot is simple. It is the summer of 1930 and one of the Southern migrants, Angel, a female singer, can’t find work. Her best friend Guy, who lives with her and is gay, struggles, too. He is a fashion designer who just can’t sell what he thinks are wonderful new dresses. During the play, he is waiting for word on a large purchase from famed entertainer Josephine Baker in Paris. Their neighbor Delia finds love, we think, with a Doctor, Sam. All appears to be bliss for the newly arrived residents from the South, but there is trouble up ahead for all.

Angel is blinded by her new found love for a new man in her life, the tall, handsome, dashing Leland who just lost his wife and baby in the South. Guy’s big sales are delayed and delayed and delayed. Delia’s birth control clinic is shuttered. What will happen to them? Will their new found paradise in Harlem turn ugly? Will the Great Depression put them down, too, as it did most of the country?

Woven throughout the play are sub plots concerning a beating of Guy by neighborhood thugs who object to his lifestyle, the Doctors worries about his job, Delila’s struggle convincing the women of Harlem to use birth control falters and so does Angel’s on again – off again life in show business and men. The last boyfriend was a low-level mobster. Will they find happiness in Harlem as they so fervently believed?

What carries the play are the magnificent characters created by playwright Cleage. She starts right in with Angel, who at first appears to be very talented and very sweet and certain to soon be America’s valentine. Then she grows mischievous and deceitful and cold. Delia is one of those goody-two-shoes types that you want to hug all night. Doctor Sam is a saint, on the surface. Leland is a Prince, or is he?

Guy is one of the stage’s great characters. He is overly gay and just does not care who knows about it. He is funny, he is soft, he is tough. He is bold and bodacious. You just love this guy. You want him to sell his dresses and get out of New York and move to Paris, where life will be beautiful.

Ms. Cleage has written a sterling play, and the end is far, far better than you expect, a real jolt.

In Blues for an Alabama Sky you learn a lot of history about Harlem and show business in black and white New York city in that era. The characters go to Small’s Paradise, that was, along with the Cotton Club and the Apollo Theater, one of New York’s legendary entertainment spots. You earn a lot about Josephine Baker, the fabled American singer who moved to Paris and found a new life. You learn about soaring unemployment in the black community in the Depression, which was just as high, and in some places higher, than it was in the white community. You get to know the Mafia and how it spread its tentacles into the night life of Harlem, running everything from prostitution to the clubs to the numbers racket.

Director L.A. Williams has done a fine job of making what could have been an ordinary play very engaging and entertaining. He gets fine work from Jasminn Johnson as Delia, Sheldon Woodley as Sam, Khiry Walker as Leland, Alfie Fuller as Angel and, whoa baby,  John-Andrew Morrison as a sensational Guy.