New, Experimental West Side Story Is an Experiment that Goes Awry 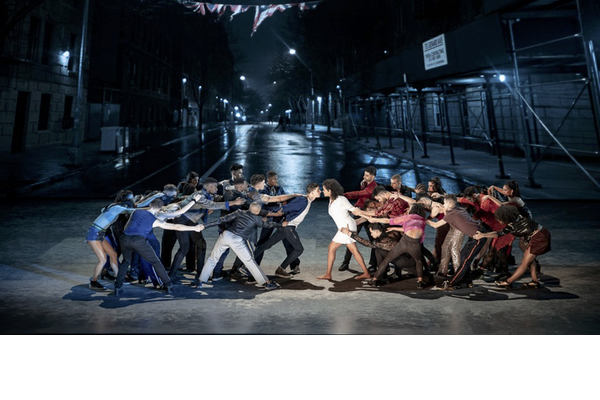 No finger snapping by the two street gangs involved in the fight for the streets of Manhattan’s West Side. No fire escape romances between Tony and Maria, the star crossed lovers. No recognizable scenes in a sprawling “America” song, the one that made Chita Rivera a superstar. No sense of the warfare between the Jets and the Sharks other than a lot of badmouthing and intense staring. No mentoring and friendship by Anita for young Maria, newly arrived from Puerto Rico. Anita is an urban barracuda. You’re far more afraid of her than both street gangs put together. Worst of all, no “I Feel Pretty,” the classic song that the director cut from the play. Yes, he cut “I Feel Pretty.”

All of those changes pale compared to the biggest change in the musical play, one of the best in theater history. The director has filmed the play and runs the film on a mammoth screen behind the actors while they play the scene. You see these tiny actors performing the real play and behind and from the stage floor way up to the heavens is this huge screen as big as the back theater wall, so high that airplanes fly past it. It is discombobulating. The movie runs through most of the show and dwarfs it You go to the theater to see a play, and you get a nearly two-hour movie. If I wanted t see the West Side Story movie, I’d turn on television and catch it – for free.

That is the ne colossal problem with the new West Side Story, that opened last week at New York’s Broadway Theater. The movie simply overwhelms the play and you watch the movie, not the play. The movie is the same as the play in front of it in some parts and entirely different in others. It has close up of the actors faces that are as big as the Empire State building and they scare you. The movie intrudes on the play, too. There is always a cameraman in the middle of the actors on stage, filming them for the movie that is running behind them.

I guess it is experimental theater, but it looks like a junior college Media 101 workshop staged badly.

The play has lost its focus and sense of history, too. The 1957 play, and very memorable 1961 movie told a rough tale about life in New York City in the 1950s, the era of the savage juvenile delinquents and the damage they caused and fear they struck in the heats of all. Two street gangs fight for supremacy while star crossed lovers try, in one night and one day, to find happiness. All goes badly. People get killed.

Little of that is in this movie, er, play. The two gangs do rumble and Tony does love Maria, but that’s about it. All of the fabled songs are in there, but there is little engaging story around them.

Some of the actors were injured during the long months of rehearsal. The man who plays Tony was out for a month with an injury. Another star was hurt so badly he had to leave the play and never came back. There were disputes between the various choreographers on the staging of the musical numbers. There were glitches here and there, troubles filming scenes three stories above the stage.

Director Ivo Van Hove (this is his first Broadway musical) worried that audience might not understand his daring new approach. He is right.

The acting, even though a bit exuberant, is fine. Director Hove gets good work from Isaac Powell as Tony, Amar Ramasar as Bernardo, Sheeren Pimentel as Maria, Yesenia Ayala as Anita,  Jacob Guzman as Chino, and Dan Oreskes as a candy store proprietor.

Oh, if you loved the music, it is all still enchanting and heart stopping. Maria will still bring tears to your eyes andTonight will get your heart racing. You will still chuckle at Gee, Officer Krupke. You will still shake your head in wonder at the score with music by Leonard Bernstein and lyrics by Stephen Sondheim (Arthur Laurents marvelous book has been altered a bit). Something’s Coming is still wonderful and America, as current today as it was in 1957 with its troubled immigrants theme, is still enchanting, if you close your eyes and thin of Chita Rivera. Can the music save the show, though?

This West Side Story needs a lot of work from the east side, north side and south side, too,