Kevin Shird is the co-author of The Colored Waiting Room: Conversations Between an MLK Jr. Confidant and a Modern-Day Activist. He is an Associate at the Center for Medical Humanities and Social Medicine, Johns Hopkins University. 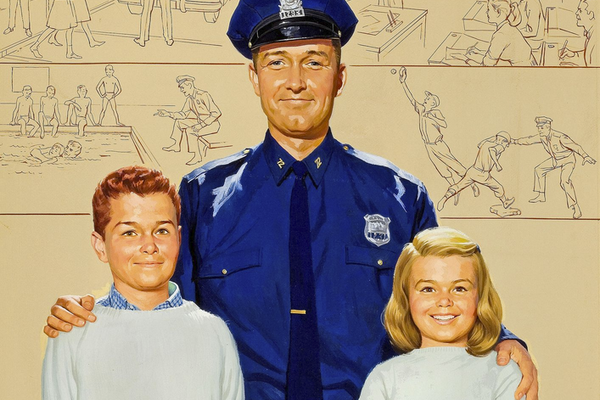 Police brutality is rightly getting intense scrutiny right now, but it isn’t all knees on necks like in the case of George Floyd or deadly home invasions like in the case of Breanna Taylor. As a historian, I am reminded daily that police interaction with black people can be much more insidious than these headline-grabbing moments we’re seeing today, and can start when black kids are very young.

A couple of years ago, I wrote a book about my friendship with Nelson Malden, who, in 1966, became the first African American to run for public office in Montgomery, Alabama—and who for many years was the Rev. Dr. Martin Luther King’s barber. But one of the stories that most troubled me actually came from Nelson’s wife Dee, who was a public school teacher in a black school in the 60s.

In Montgomery, during the early years of the civil rights movement, “Public Safety Day” was a time when officers from the local police visited area schools and gave presentations in front of a student audience about the work that the department conducted to help keep the community safe. It was billed as a public relations campaign designed to connect young people to law enforcement officials in a positive way, the equivalent of a visit from their local “Officer Friendly.” Another goal of the effort was to cultivate in the students an interest in the department that might one day lead to their employment there. But the racism and degradation of people living in the South in those years was blatant, and it ran deep, deep enough to reach even the youngest of school-age children.

Because the public-school system was still racially segregated at the time, on Public Safety Day there were officers assigned to visit the students in the all-white schools and others assigned to visit the students in the all-black schools, like the one where Dee was a teacher. At the white schools, the visits were a pleasant and uplifting experience for the students, during which the officers spoke about the wholesome parts of their job—keeping order and helping others—and the possibility of a student having a career in the department one day.

In the black schools, the visits were a much different experience. In Dee’s school as in other all-black schools, shackled and handcuffed black inmates who worked on a chain gang at the local prison were shepherded into the school auditorium and used as props in a presentation before elementary and junior high school students. “You don’t want to end up like these niggas, do you, boys and girls? If not, you better straighten up,” were the words “Officer Friendly” offered to the auditorium full of students who were trembling with fear. The students were traumatized by the suggestion that they too could end up in shackles and chains, like the black men who were paraded in front of them. The students spoken to weren’t having disciplinary problems in class; they were run-of-the-mill students who performed well on tests and conducted themselves properly. They just happened to be black, and as such, they were treated in a dehumanizing way that contrasted with the public image of Public Safety Day.

Listening to Dee recount the story of how our must vulnerable commodity, our youth, had been intimidated and traumatized while in school angered me to my core. “It was shocking,” she said. “This is how the police presented themselves to young students in Montgomery. So when they grew up with this fear of the police, it stayed with them as adults.”

As I look upon the current televised images of police responding to marches with violence, I have noticed that in some cases, white protestors—finally seeming to understand that the police treat them differently—have used their own bodies as shields between the police and black protestors. And I am reminded again and again of Dee’s story. I am amazed that of all the stories I have heard from history, this one has stuck with me the most, when to Dee, it was just a throwaway.