Andrew Feffer is Professor of history and co-director of Interdepartmental Program in Film Studies at Union College, Schenectady, NY.  He is author of Bad Faith: Teachers, Liberalism and the Origins of McCarthyism (Fordham Press, 2019). 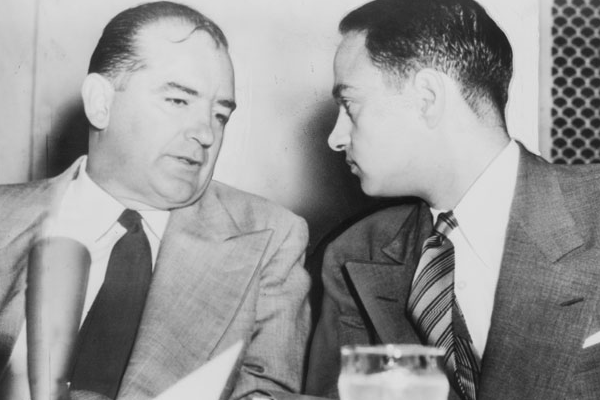 Was Roy Cohn evil?  There seems to be a consensus that he was.

That is at least what we learn from two recent films on New York City’s most notorious lawyer: Matt Tyrnauer’s 2019 documentary, “Where’s My Roy Cohn?,” and Ivy Meeropol’s “Bully. Coward. Victim.  The Story of Roy Cohn,” just released last month on HBO.

A fixture of the New York political and social scene until his death from AIDS in 1986, Cohn made himself indispensable to some of the biggest movers and shakers of the late 20th century, including Joseph McCarthy, Ronald Reagan, members of the Genovese crime family, and Donald Trump.  A friend to the rich and famous, he was the bête noir of liberals and the left.

As an assistant prosecutor in the espionage case of Julius and Ethel Rosenberg, Cohn illicitly lobbied trial judge Irving Kaufman to impose the death sentence, carried out by electrocution in June 1953.  Later (as we learn in Meeropol’s film), Cohn admitted to fellow lawyer Alan Dershowitz that he had helped frame Ethel Rosenberg by coaching false testimony from her brother David Greenglass, a miscarriage of justice later confirmed by Greenglass in a 60 Minutesinterview.  About using the courts to murder an innocent mother of two young children, Cohn had no more remorse than he had about not paying his income taxes.  “We framed guilty people,” he reportedly told Dershowitz.  To protégé Roger Stone he said, “…if I could have pulled the switch, I would have.”

Cohn used the notoriety he achieved helping to execute the Rosenbergs and convict other accused Communists to land the coveted position of chief counsel to Wisconsin Senator Joseph McCarthy in his notorious Congressional crusade against alleged communist infiltration of national government and the military.  Cohn’s constant presence at McCarthy’s side in the televised Army-McCarthy hearings in 1954 earned him international fame, while at the same time crashing his political ambitions once McCarthy’s manic overreach brought censure from the public and the Senate.

His history as a McCarthyite clung to Cohn like a cheap suit, but as he retreated home to New York City he made that suit a fashion statement, amping up his anticommunist rants and selling his legal services to anyone who needed a ruthless courtroom advocate with no compunction about twisting the truth.  His clients included mobsters, crooked politicians and Gotham’s worst powerbrokers, the city’s real estate titans, among them the young Trump, who at the time was turning his father’s outer-borough business into an international empire.  Cohn cherished his friendship with Trump, whom he defended in the 1970s against a federal suit for racial discrimination in housing.  Trump repaid that loyalty by pretending he didn’t know Cohn when the latter’s AIDS diagnosis hit the press.  Until, of course, he needed a truly ruthless advocate during the Russiagate crisis, when Trump’s long dead former personal fixer once again became “my Roy Cohn.”

The banality of “Cohn’s evil”

Many interviewees in both documentaries testify to Cohn’s “evil,” his social pathology, his lack of scruples, conscience or remorse, and his nearly innate criminality.   An unattributed voiceover sets the tone for Tyrnauer’s film from its opening scenes:  “Roy Cohn’s contempt for people, his contempt for the law was so evident on his face that if you were in his presence you knew you were in the presence of evil.”  According to former prosecutor and author, James Zirin on whom Tyrnauer relies heavily for background and color, “He was like a caged animal.  If you opened the door to the cage, he would come out and get you.”

Meeropol’s film sets almost the same tone, though differently framed by her experience as the granddaughter of the Rosenbergs.  Interviewing very few of the same informants, Meeropol seems to come to the same conclusion.  John Klotz (a lawyer who investigated Cohn in the 1970s) declared, “Roy Cohn was one of the most evil presences in our society during most of my adult life.”  As Cohn’s cousin, journalist David Lloyd Marcus (who also appears in “Where’s My Roy Cohn?”), succinctly put it, Cohn was “the personification of evil.”

In cataloguing Cohn’s misdeeds, both films are precise and exhaustive.  They leave little doubt that this behavior resembles textbook examples of a personality disorder or social pathology.  A lawyer from Cohn’s firm could have been providing a profile to Psychology Today when he tells Tyrnauer that Cohn “knew no boundaries” and that “if you were on the right side of him, you were OK.  If you were on the wrong side of him, it was terrible.” According to Zirin, Cohn was “a personality in disarray.  A personality in anarchy, which had no rules, had no scruples.  It had no boundaries.”

But as Cohn himself might declare, “what’s it to us?”  Why should we care about this psychologically crippled character? How was Cohn’s corruption and unscrupulousness so different from anyone else’s?  Isn’t the world Cohn inhabited, of socialites and their lawyers, of mobsters and real estate speculators, full of sociopaths and disordered personalities like Cohn’s?  It’s only if we think of Cohn as especially emblematic of the age that we spend so much time learning about his life.

Tyrnauer only hints at a broader perspective that might have been useful in understanding Cohn as a historical figure.   “Roy was an evil produced by certain parts of the American culture,” writer Anne Roiphe (another Cohn relative) tells us.  But what parts?  “When you look at Cohn’s life,” the voice over opening Tyrnauer’s film intones, “you are shining a light on demagoguery, hypocrisy, and the darkest parts of the American psyche.” Tyrnauer cuts to scenes of Cohn with a young Donald Trump, Trump speaking and, at the end the montage, the scene of a violent attack on a black protester at a recent Trump rally.

If it’s not one thing, it’s your mother

Unfortunately, we don’t learn much from such juxtapositions.  Did Cohn create Trump?  Was he Trump avant la lettre, as New York Magazine columnist Frank Rich recently proposed?  Or did they have some origin in common?  As they strain to explain Cohn’s significance, both films get hung up on the notion that Cohn was “evil.”  Tyrnauer’s suffers the most, and “Where’s My Roy Cohn?” takes off from that assumption on a psychoanalytic tangent that is all too familiar: It was all about his mother.

David and Gary Marcus, Cohn’s cousins on his mother’s side, recount the story of a Passover hosted by Dora Marcus Cohn at the family apartment, when a maid died preparing the Seder dinner.  Dora, Roy’s mother, hid the body and kept the incident a secret, until one of the children asked the traditional question, “why is this night different from every other night?”  Dora blurted out “Because there’s a dead maid in the kitchen.”

Cousin Gary thought Dora was more troubled by the fact that the maid’s death had interrupted the Seder, “not that a life had been lost.” For David, this incident revealed the origins of Roy’s pathology: “That’s totally Roy’s spirit.  His lack of ethics, his lack of empathy.  That came from Dora.  For Roy, life was transactional.  It was all about connections and accruing power.”

In Tyrnauer’s extensive picture of her, Dora, the homely rich Jewish daughter who at best could achieve a desperately arranged marriage, doted on her only son, holding him so close that he could not break free until her death.  Dora here seems blamed both for his homosexuality and his need to hide it.  And thus for Cohn’s “transactionalism” of corrupt exchange and manipulation, in which people were simultaneously shields against public scrutiny (as was lifelong friend, Barbara Walters, who reluctantly bearded for him) and instruments of power.

But, wait.  What about the father?  We learn some things about Al Cohn, but not really enough.  Father Al bought his judgeship with money from his wife’s family in exchange for marrying Dora.  He then served the New York political machine for the rest of his long career on the bench, and put his son in contact with some of the biggest hitters of Tammany Hall, including Bronx political boss Edward J. Flynn, a slick Roosevelt loyalist who nonetheless helped Tammany run the city like a cashbox through the middle of the twentieth century.  Later, Cohn the younger maintained that close relation, serving Tammany stalwarts like party boss Carmine DeSapio, Brooklyn’s Meade Esposito, and Bronx party chair Stanley Friedman, who also joined Cohn’s law firm.  Cohn, like his father, was a creature of the machine. In a city run so “transactionally,” why do we even need to be talking about Dora?

The father’s Tammany connections also help explain the son’s ardent anticommunism. The Bronx political machine, led not only by Flynn but also by its representatives in Albany, stood at the forefront of New York anticommunism during the 1930s, the “red decade.”  Bronx Democrats were responsible for some of the most repressive anticommunist legislation on the eve of World War II, long before the Cold War or any inkling of a Soviet threat to national security.  In March 1940, it was a Bronx Democrat, state Senator John Dunnigan, who launched the city’s Rapp-Coudert investigation of Communists in the public schools and municipal colleges, leading to the firing of several dozen and serving as a prelude to McCarthyism a decade later.

Why did Tammany hate communists?  Throughout the 1930s, Communists in the teacher’s union and elsewhere effectively challenged Tammany control of city schools and agencies, a wrench in its patronage system rivalled only by reformers in Mayor Fiorello LaGuardia’s City Hall.  Clearly, not all Democrats were “liberal” like FDR, or like Roy Cohn claimed he once was, before he decided to support Republican Cold Warriors such as Reagan.

Meeropol does a bit better in historically situating Cohn.  In contrast to Tyrnauer’s facile psychoanalysis, she traces Cohn’s evil back to his pivotal role in the Rosenberg case, though the history stops there.  Her film is not as slickly cut or scored as Tyrnauer’s, but Meeropol is more honest and insightful, as she continues the project of self-exploration through family history begun in her 2004 documentary on her grandparents’ case, “Heir to an Execution.”  This project, which includes extensive interviews with her father Michael, the elder of the two Rosenberg/Meeropol children (her uncle Robert is notably absent from this latest film), is valuable as history in its own right.

Meeropol also provides a more nuanced picture of Cohn’s closeted homosexuality, which is at once public and repressed, as well as weirdly honest, dishonest and corrupting, all at the same time.  In this she follows the lead of Tony Kushner, whose play Angels in America figures prominently in her reconstruction of Cohn’s disturbed and disturbing life.  Like Kushner, Meeropol sees something convoluted and paradoxical about Cohn, even as he represents the worst of American culture.  “To call him ‘evil’ -- it’s true,” journalist Peter Manso tells her at one point.  “But it doesn’t explain a hundred other things about Roy Cohn.”

That’s a good point.  But it would be nice to learn a few more of those hundred things.  More needs to be said about Cohn’s resemblance to and affinity for Trump, the historical roots of that “strain of evil,” as Rich puts it, in New York’s social register and political “favor bank.”  It’s not enough to justify our interest in Cohn merely by connecting him to Trump, as Tyrnauer does.  We need to know who and what enabled each of them to exist.  Many of those enablers are the same people.  Their story is worthy of yet another film.