Chris Lamb, Ph.D., is chairman of the Journalism and Public Relations Department at Indiana University-Purdue University Indianapolis. He is the author of The Art of the Political Putdown: The Greatest Comebacks, Ripostes, and Retorts in History (2020). 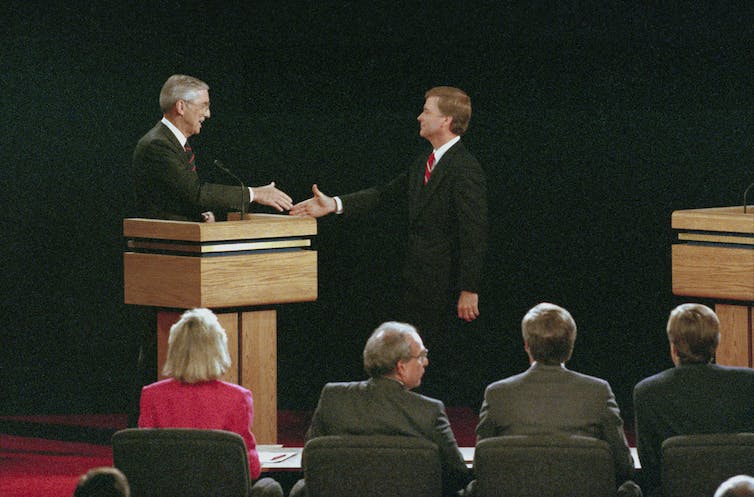 Texas Sen. Lloyd Bentsen, left, had something to celebrate after the 1988 vice presidential debate. Quayle not so much. Bettmann via Getty

If you think that vice presidential debates – like the one on Oct. 7 between Vice President Mike Pence and U.S. Sen. Kamala Harris – have no political impact, I have two words for you: Dan Quayle.

After George H.W. Bush selected the little-known 41-year-old Senator Dan Quayle of Indiana as his running mate, the youthful-looking Quayle tried to deflect concerns about his age and inexperience by comparing himself to John F. Kennedy, who also had served as a congressman and senator before running for president in 1960.

Quayle’s handlers told him not to bring up the comparison during his only debate with the Democratic vice presidential candidate, Lloyd Bentsen. Unlike Quayle, Kennedy was a war hero during World War II, had won a Pulitzer Prize and had a national reputation when he entered the presidential race.

Nonetheless, when on Oct. 5, 1988, debate moderator Tom Brokaw questioned whether Quayle was qualified to be vice president, Quayle answered, “I have as much experience … as Jack Kennedy did when he sought the presidency.”

Quayle’s expression is frozen in time, the chastened look of a boy sent to his room.

The mic drop moment of the 1988 vice presidential debate.

The Bentsen-Quayle exchange, which features prominently in my new book, “The Art of the Political Putdown,” remains perhaps the most famous moment in the history of American political debates.

The Bentsen-Quayle debate was viewed by 50 million people in 1988. The Kennedy bit is still available online, billed as the “Lloyd Bentsen’s mic drop moment.” That clip will no doubt be discussed and viewed before the Pence-Harris debate, as it is every four years.

The disastrous debate moment didn’t actually hurt Bush, who easily beat out Michael Dukakis. But it dogged Quayle, who during Bush’s term was the punchline of many jokes. Sen. John Kerry of Massachusetts told one that went, “The Secret Service is under orders that if President Bush is shot, they are to shoot Dan Quayle, too.”

Quayle’s legacy is the cautionary tale of how he let himself be defined by that debate mistake. 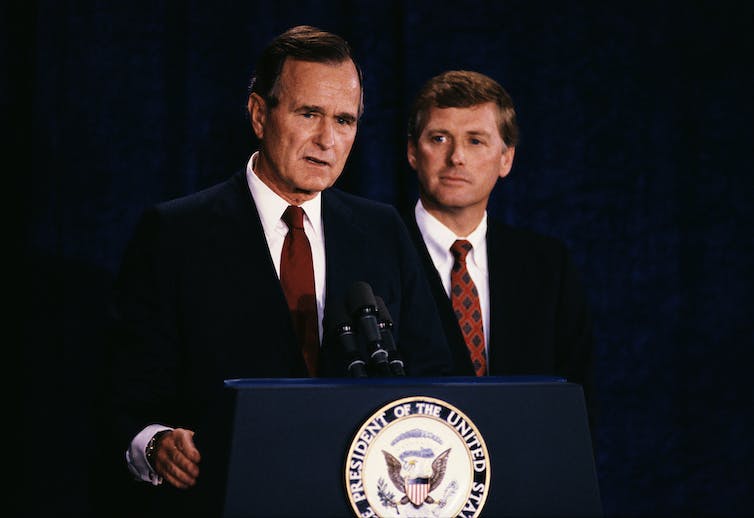 One of the lessons of the Quayle-Bentsen exchange is listen to your advisers. Quayle did not. Bentsen did.

Secondly, Quayle made the worst of a bad moment on national television. He could have restricted the damage of Bentsen’s comeback with self-deprecating humor – like President Ronald Reagan once did.

When Doonesbury comic strip artist Garry Trudeau wrote a strip that took readers on a tour of President Reagan’s brain and found only marbles, Reagan responded by saying, “Cartoonists occupy a special place in my heart. I hope Garry Trudeau will remember that. It’s heart, Garry, not brain, heart.”

When Doonesbury poked fun of Quayle, however, Quayle complained.

“It’s well known that Garry Trudeau has a personal vendetta against me,” he said.

Late-night comedian Johnny Carson then joked, “That’s the way to get through to Quayle – make fun of him on the comics page.”

When Bush ran for reelection in 1992, Quayle said he was going to be the campaign’s “pit bull” against Democrat Bill Clinton. When asked about this, Clinton laughed and said, “That’s got every fire hydrant in America worried.”

You say ‘potato,’ he says ‘potatoe’

Quayle himself perpetuated his reputation as a dour lightweight.

In 1992 he attacked television character Murphy Brown, an unmarried news anchor, for having a child out of wedlock.

In response, late-night comic David Letterman looked straight into the camera and told Quayle to pay attention. “I’m only going to say this once. Murphy Brown is a fictional character!”

Then, in June 1992, during a trip to an elementary school, Quayle corrected a 12-year-old boy who had correctly spelled “potato,” adding an “e” to the word.

American comedians had a field day.

“It was more than a gaffe,” Quayle wrote of the p-o-t-a-t-o-e moment in his 1994 memoir, “Standing Firm.” “It was a ‘defining moment’ of the worst imaginable kind. I can’t overstate how discouraging and exasperating the whole event was.”

Quayle thought the incident got so much play because “it seemed like a perfect illustration of what people thought about me.”

Dan Quayle was a one-term vice president whose greatest contribution to politics came in a VP debate. In the dog-eat-dog world of politics, no politician since has wanted to end up on the Quayle end of the fire hydrant.