Roland Ennos is a visiting professor of biological sciences at the University of Hull. He is the author of successful textbooks on plants, biomechanics, and statistics, and his new book The Age of Wood: Our Most Useful Material and the Construction of Civilization was released by Scribner on December 1. 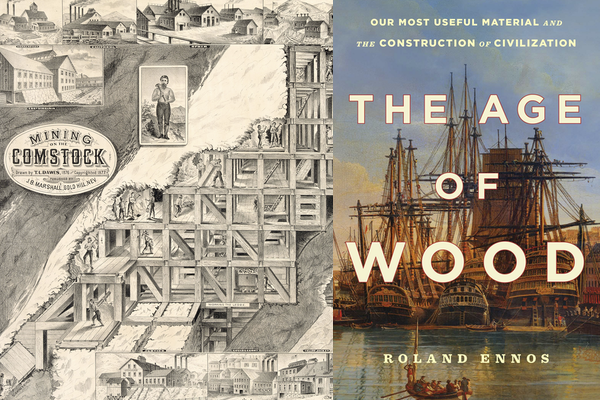 At the end of the eighteenth century, the newly formed United States of America was a country of widely-scattered rural settlements. It’s therefore one of the miracles of history that just a century later it transformed itself into an industrial powerhouse, one that had caught up with and started to overtake Europe. The key to this achievement was the vast pristine forests that covered huge areas of the East and West coasts. But unlike the Baltic States, America could not expand its economy by exporting timber to Britain and the Netherlands. Shipping costs were simply too great to transport timber across the Atlantic. It was only ships’ masts, made from the trunks of America’s huge white pine trees (dispute over which was one of the grievances that precipitated the Revolutionary War) that could profitably be exported. Instead, it was the ingenuity of American engineers and inventors that enabled the country to use wood in new ways to build its own industry and infrastructure.

By the end of the eighteenth century, Britain led in industrialization, having developed methods of using its huge coal reserves to smelt large quantities of cast and wrought iron; it had replaced expensive and brittle charcoal in its blast furnaces with cheap and strong coke made by heating coal. To compete, American founders reduced their costs by improving the methods they used to produce charcoal; rather than burn wood in clamps, they heated it up in large retorts, producing a product that was cheaper and stronger, along with useful by-products such as tar, methanol and acetone. America’s blast furnaces were almost as large as Europe’s and produced iron at comparable costs. It was not until 1850 that American coke-based iron production exceeded charcoal-based, and not until the 1920’s that charcoal-based production ceased.

The high quality iron produced by the American foundries was quickly put to good use. It produced the machinery and blades of the rapidly increasing number of sawmills. The productivity of each sawmill quickly rose; average output rose from 8,000 board feet a day using traditional muley saws to 40,000 a day using new circular and gang saws. The greatest ingenuity, however, was in the way American engineers used wood, joining timbers with an increasing range of wrought iron fastenings, enabling a country with few traditional carpenters to build their infrastructure.

In Louis Wernwag’s famous Colossus Bridge, built in 1812 over the Schuylkill River near Philadelphia (at 340 feet the longest wooden bridge in the world), the main elements of the trusses were connected by iron rods.  And unlike in Europe, where the railways were built with iron and stone, Americans built their railroads for the most part with timber. They used wrought iron steam engines, of course, but they mounted the rails on wooden ties, while they built wooden railway carriages whose timber frames were joined together using iron rods and bolts. They even used wooden rails. Early railroads were often built with strap rails, thin strips of wrought iron pinned to a wooden rail.

But the glory of the American railways were the spectacular wooden trestle bridges they built to cross gorges, replacing the iron trusses, stone viaducts and soil embankments beloved of European engineers with cheaper, quicker-to-build frameworks of timber beams and iron joints. The result was an exceptionally cheap railway– American railroads typically cost $20,000 - $30,000 per mile, less than a sixth of the $180,000 a typical European railway cost. It was this, more than any other factor, that enabled the Americans to build their long-distance railroads so early, from the mid 1830s onwards. The new lines opened up the West Coast to new colonists and proved a far quicker and safer alternative to the old wagon trains of the Oregon Trail.

Novel wooden structures also helped speed up the economic and political development of the West Coast. The discovery in 1859 of vast reserves of silver ore in the Nevada mountains led to a silver rush. One particularly large deposit was the Comstock Lode, which contained vast quantities of soft ore that could be readily extracted with shovels. The problem was to extract the ore, while avoiding deadly cave-ins. The German mining engineer Philip Deidersheimer came up with the solution: square set timbering. As the miners removed ore, they replaced the space with 6 feet cubic lattice works of timber, each one being linked together with wrought iron rods to form a gigantic framework that propped up the entire lode and which could be backfilled with waste. The Comstock Lode made vast fortunes, including that of the influential Hearst family, paid for the expansion of San Francisco, and prompted the incorporation of the State of Nevada into the Union.

Americans were also quick to use an even simpler attachment system—nails. The first machines to cut nails from wrought-iron sheet were patented by Jacob Perkins of Massachusetts in 1795. And by 1830, American builders were starting to exploit the wood-holding capabilities of nails to erect cheap, mass-produced houses. Rather than just cut logs into thick, heavy beams to provide a frame for a house, American sawmills were able to slice them into uniform thin planks and narrow studs. The builders could then nail these uniform elements together to make lightweight houses, in a technique dubbed balloon framing. The main structure was composed of long, narrow vertical studs, the famous two-by-fours, which were nailed to horizontal lintels and ribbons. The walls could be fully assembled on the ground, then simply lifted into place and nailed together. The only grooves and joints were in the floor joists, which were let into and nailed to the studs and rested on the ribbons. Finally, the whole structure was sheathed on the outside with planks, on the inside with boards, and insulation could be placed in between the two skins to keep the house warm in winter and cool in summer. Balloon-framed houses allowed American settlers to be cheaply and decently housed and proved surprisingly robust. Indeed, even today most Americans live in wood-framed houses. People even started to build roads from wood, corduroy rural roads from split logs and urban streets from wooden blocks.

There was just one problem with this wooden infrastructure–it did not last. Timber bridges exposed to the rain rapidly rot and timber roads become slippery; strip rails wear out and flimsy wooden houses deteriorate and burn down easily, like in San Francisco after the 1906 earthquake. By the early years of the twentieth century, fortunately, America was wealthy enough to start to replace its timber infrastructure with one of steel and concrete.

But this history has had another result. Whereas Europe retains much of its nineteenth century infrastructure, in America most of it has long gone. The contrast is perhaps starkest in nineteenth century towns. Take two similarly sized ports: Goole in Yorkshire, England, built in the 1820’s where the Aire and Calder Navigation canal meets the Humber estuary, to handle exports of coal and imports of timber; and Muskegon, Michigan, built just a few years later at the mouth of the Muskegon River to handle timber exports. The brick-built center of Goole is largely intact, complete with the market hall, main shopping street, and railway. People still live in the rows of terraced houses, semis, and villas. The skyline is dominated by the Victorian church steeple and a windmill built even before the town. In Muskegon, in contrast, little remains from the nineteenth century apart from a few grand houses of the timber magnates–houses that constitute a museum. In the one town, therefore, people are surrounded by the old, in the other by the new.

This same pattern can be seen all across the two continents and gives a wholly different character not only to towns but also the countryside: ancient countryside, villages and farmhouses versus modern farmsteads. So it seems likely that the different pattern of development must have had not only short term economic effects, but also long term social and cultural effects: The American love of reinvention versus the European love of preservation; the European thrall to the past versus the American to the future. Our different attitudes to history may be due to an accident of the choice of materials with which our ancestors built their countries.