Daniel Ogden is Professor of Ancient History at the University of Exeter. His book, The Werewolf in the Ancient World, is available now from Oxford University Press. 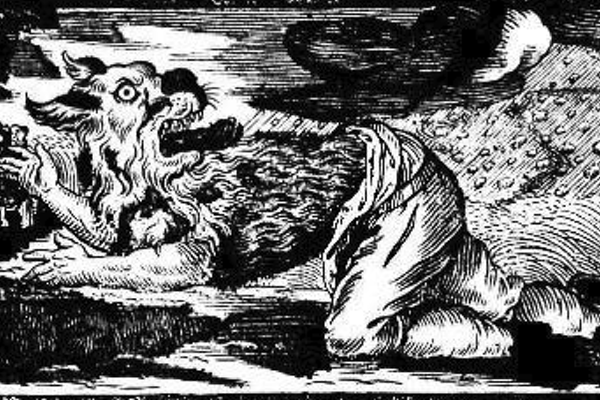 1. Yes, the ancient world did know about werewolves!

The modern conception of the werewolf and his lore (it usually is his) is mainly conveyed by the movies, in an unbroken chain beginning with Universal Pictures’ The Wolf Man of 1941, starring Lon Chaney Jr., and continuing today in the rather good Underworld series. The roots of these lie in the pulp fiction of the early twentieth century. Amongst all this, werewolf afficionados usually single out one novel as retaining some literary merit, Guy Endore’s 1933 The Werewolf of Paris.

But what about before this? Many may instinctively imagine roots further back in the medieval world, and that is right enough: the twelfth century AD is witness to a remarkable flowering of werewolf tales -- from England, France and the Viking realms of Iceland and Scandinavia. However, long before even this, werewolves were stalking the writings of the Greeks and the Romans between the fifth century BC (arguably earlier) and the fifth century AD. Striking stories and claims about them are found in such authors as Herodotus, Pliny (the Elder) and Pausanias, but the best ancient werewolf story is a Latin one preserved by Petronius in his bawdy Satyricon (AD 66).

Petronius tells how, somewhere in Campania, one Niceros had been making a night-time trip to visit his girlfriend, Melissa, the wife of Terentius the innkeeper, and had brought a soldier-friend along for the journey. At a certain point on the grave-lined road, the soldier stopped to pee against one of the tombstones. Niceros suddenly noticed that he had taken all his clothes off and piled them up, and was peeing a circle on the ground around them. Then he turned into a wolf, howled, and ran off into the woods. Approaching the clothes, Niceros discovered they had been magically turned to stone. He continued in terror to Melissa’s home, where he learned that a wolf had just got in amongst their sheep and had been slaughtering them, but it had run off after a family slave had put a spear through its neck. As Niceros made his way back home the next day, he found the clothes were gone from the tomb, but in their place was a bloodstain, and on arrival he found the solider abed, with a doctor treating him for a neck wound. At that point (and only at that point – oddly) he realised that the solider was a werewolf, and refused ever to break bread with him again.

2.  The ‘werewolf gap’: it’s all about the folklore

Between St Augustine (c. AD 400) and the twelfth-century flowering of werewolf stories we hear nothing about them. What are we to make of this 500-year gap? A simple explanation might be that the authors of the twelfth century rediscovered the long-forgotten werewolves in their ancient texts and just chose to start writing about them again. Such an explanation might initially seem to be favoured by the fact that Marie de France’s Anglo-Norman werewolf poem Bisclavret of AD 1160-78, for example, has much in common with Petronius’ story: signally, we find the recurring theme of the werewolf’s need to keep his clothes safe if he is to be able to recover his human form, with Bisclavret hiding his clothes under a rock when it is time for him to transform. However, it is unlikely that Marie had direct access to Petronius’ story…

The more interesting and intriguing possibility is that werewolves just went underground, as it were, and continued to thrive under the radar in the realm of folklore and folktale throughout these centuries, only to resurface into the world of fine literature again in the twelfth. And this is almost certainly what happened. A clue to this is to be found in what is a central theme of Marie de France’s tale, and the tales of other writers of her age: that of the adulterous wife.

When Bisclavret’s wife learns that he is a werewolf, she makes him reveal where he hides his clothes whilst under transformation, and accordingly steals them and makes off with them with the help of her lover, with whom she then elopes, leaving Bisclavret stranded as a wolf for many years before his is able to take his revenge on the pair and recover his human form. When we look back at Petronius’ tale we can see that the motif of an adulterous wife is already lurking in it in an incidental detail of which nothing is made: Melissa is conducting an adulterous affair with Niceros. There is no obvious reason why Marie and the writers of her time should have seized upon this incidental detail and elaborated it so greatly – even if they did, after all, have access to Petronius’ text. It is much more likely that, as an artful writer, Petronius had included the incidental detail of the adulterous wife in order to allude to another, related werewolf story he was familiar with but was not on this occasion telling. It will then have been upon this second story, preserved in folklore alone for a millennium, that Marie and her contemporary writers were eventually to seize.

3. The ancient world’s werewolves were already, pretty much, our werewolves

If one were to ask a child of today about the typical features of a werewolf story, he or she would probably reply along the following lines: (1) a werewolf is a man that transforms into a wolf for certain, limited, periods of time before turning back into his human form; (2) these times coincide with the full moon; (3) he changes in this way because he is under a curse – ‘the curse of the werewolf’; (4) in his wolf state he attacks and butchers humans; (5) he is best killed by a silver bullet.

All of these features can be found amongst the ancient lore of werewolves, with the unsurprising exception of the silver bullet, the ancient world knowing nothing of bullets, of course. This last well-loved motif seems to appear first in Jeremy Ellis’ pulp-fiction story ‘Silver Bullets’ of 1930. (1) The notion that a man might transform into a wolf in a cyclical way is implicit in Petronius and explicit in a Greek tale of Aesop, in which a thief pretends to be werewolf in order to steal a cloak: he claims that he turns into one whenever he yawns three times. (2) The notion that a werewolf might change at the full moon is strongly hinted at in Petronius’ story, in which we are told that ‘the moon was shining like the midday sun.’ (3) As to the curse, Aesop’s bogus werewolf implies that he is under a divine curse. In Herodotus and the Latin poets of the Augustan age we find wizards and witches with the ability to turn people into wolves, though they tend to use their powers not so much to curse others as to transform themselves, the more easily to pursue their nefarious nocturnal activities. (4) And as to butchering human victims, a curious werewolf described by Pausanias, the so-called Hero of Temesa – described a ghost in a wolfskin – is said to have devoured the city’s most beautiful girl every year. When young men transformed into wolves for a certain period in a mysterious Arcadian ritual associated with Zeus Lycaeus (‘Wolfy Zeus’), they could only turn back if they had – against their instincts, as it were – abstained from the devouring of human flesh in the meantime.  And Aesop’s thief separates his victim from his cloak by pretending that he is about to eat him.

4. ‘Lycanthropy’ is an ancient Greek word… but the Greeks didn’t have a word for ‘werewolf’

Our posh word for werewolf, ‘lycanthrope,’ together with the related abstract term ‘lycanthropy,’ is derived from the ancient Greek lykanthrōpos, made up of the elements lykos, ‘wolf’ and anthrōpos, ‘human.’ However, in antiquity, these words, first found in the second-century AD writings of Marcellus Sidetes, were severely restricted in their use. They didn’t designate werewolfism proper, but rather just a medical condition that was metaphorically conceptualised in terms of it. The condition seems to have been a sort of severe depression or mental withdrawal, the sufferers of which were said to hang around tombs listlessly. When the Greeks wanted to talk about werewolves proper, they would simply deploy phrases of the sort ‘turning into a wolf.’ It isn’t until the early-ninth-century AD Byzantine chronicle of Theophanes the Confessor that we first find ‘lycanthrope’ applied indisputably to a werewolf proper. It could be said that the Romans too had no word for ‘werewolf.’ The word Petronius and others deploy is versipellis, which, literally, has the broader meaning of ‘skin-shifter.’ However, one gets the sense that ‘werewolf’ was, nonetheless, a privileged significance of the term.

Whilst on the subject of language, we might say something of the origins of our own word ‘werewolf.’ It is commonly construed, quite understandably, and by a process of subtraction, as it were, to signify ‘man-wolf.’ An assumption of this sort underpins many derived coinages, including, in recent times, that of Wallace and Gromit’s delightful ‘Were-Rabbit.’ The understanding goes back a long way, all the way indeed, once again, to the twelfth century AD and Gervase of Tilbury. In his Otia imperialia of AD 1210-14, Gervase, in speaking of the word in its Anglo-Saxon form, werewulf, derives the were- element from the Latin vir, ‘man.’ In recent years linguistic historians have related the first element rather to the Anglo-Saxon w(e)arg and the Old Norse vargr, the primary significances of which seems to have been ‘strangler,’ ‘outlaw’ and ‘outsider.’ However, there are vestigial indications in both languages that these words may always have borne a secondary significance of ‘wolf’ in their own right. And so it seems that in origin ‘werewolf’ may have signified ‘wolf-wolf.’ Perhaps, to get the logic of it, one must think oneself back into the situations in which a werewolf is first revealed to be such: ‘That man is a wolf I tell you, a very wolf!’