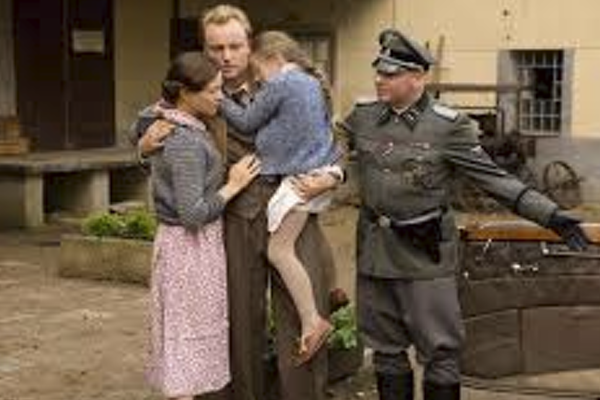 With ethnic tensions in the USA much in evidence as witnessed by attacks on Asian Americans, increased antisemitism, and continuing Trumpian white resentment against minorities and immigrants, two films recently available on Amazon Prime Video that display ethnic hatred are timely indeed. They also reflect real historical happenings.

The first, named as “Hatred” on Prime, is a Polish drama that first came out in 2016 under the title “Volhynia.” But the movie does show hatred aplenty, including some brutal killings--especially of Poles by Ukrainians.

The original title refers to a Ukrainian area below modern-day Belarus. It is a region now in Ukraine that in history has bounced back and forth between Russian and Polish control, e.g., Russia ruled it in the nineteenth century and Poland controlled the western part of it between WWI and WWII. A graphic at the film’s beginning cites the ethnic makeup of Volhynia prior to WWII as 70% Ukrainian, 16% Polish, and 10 percent Jewish.

Many viewers of the film will probably just shake their heads and ask how humans can be so hateful and cruel to each other. All the ethnic and religious killings remind one of the lines from Indian-born writer Salman Rushdie’s The Moor’s Last Sigh: “In Punjab, Assam, Kashmir, Meerut--in Delhi, in Calcutta--from time to time they slit their neighbor’s throats. . . . They killed you for being circumcised and they killed you because your foreskins had been left on. Long hair got you murdered and haircuts too; light skin flayed dark skin and if you spoke the wrong language you could lose your twisted tongue.”

But in Volhynia, like in India and Pakistan, not only did different ethnic groups (e. g., Poles, Ukrainians, Jews, and Russians) clash, but so also did differing religious beliefs--in Volhynia’s case, Catholicism, Orthodoxy, and Judaism. In eastern Europe as a whole, similar conflicts occurred from even before the assassination of the Austrian archduke Franz Ferdinand by a Bosnian Serb in 1914 up to the 1990s’ conflicts among Serbs, Croats, Bosnian and Kosovar Muslims and other ethnic groups in the former Yugoslavia that led to the deaths of hundreds of thousands and created millions of refugees. In his sweeping The War of the World: Twentieth-Century Conflict and the Descent of the West, historian Niall Ferguson lists ethnic conflict as one of the three main causes of the “extreme violence” of the century, and central and eastern Europe as the most deadly of the “killing spaces.”

Hatred centers on the story of a young Polish girl, Zosia Głowacka, living in a Volhynian village. It begins with the wedding of her sister to a Ukrainian. Zosia is also in love with a young Ukrainian, Petro--an early scene shows them physically intimate. But in exchange for farmland and some animals, her father marries Zosia to Maciej, an older widowed Polish landowner with children (In the interwar years, the Polish government had helped many war veterans and other Polish colonists settle in Volhynia, which contributed to Ukrainian resentments). The wedding occurs on the eve of Germany’s 1939 invasion of western Poland, and Maciej is soon drafted to help the Poles fight the Germans.

After the Germans quickly rout them, Maciej and other Poles attempt to return to their Ukrainian homes, but many of them are captured, tortured, and killed by local Ukrainians. Maciej, however, returns to his village by disguising himself as a Ukrainian. But he will not remain there long because according to the secret agreement attached to the Nazi-Soviet Pact of August 1939, part of “Polish” Volhynia is to be taken over by the Russians. After they do so, they arrest and send many Poles, including Maciej, to forced labor in Siberia or Kazakhstan--the new teacher also tells (in Russian) her young students that religion is a superstition.

From late 1939 to the summer of 1941, Zosia remains at Maciej’s farm with his children and an infant son of her own, probably fathered by Petro, who gets killed soon after helping Maciej’s children and Zosia avoid deportation.

In June 1941 the Germans attack the USSR and quickly take over the Volhynian area where Zosia lives. Some of her fellow villagers who are Ukrainian greet the German troops and cooperate in the arrest and killing of Jews and Poles. Zosia, however, risks her own life to help some Jews.

By the summer of 1943 the Ukrainian Insurgent Army (UPA) has grown, as has the number of local Poles it has killed. The film shows two Ukrainian Orthodox priests preaching to their congregations. The first warns against excessive nationalism, but the second states, “We need to fill all the rivers with Polish blood because Ukraine has to be pure.”

Shortly thereafter some of the most horrific scenes of the film appear as local Ukrainians burn Polish huts and kill by burning, stabbing, axing, and other means, while shouting, “Death to the Poles.”

Zosia escapes with her little son, but sees her stepson burned alive. Eventually, she arrives at the home of her sister, Helena, and her Ukrainian husband, Vasyl, who is urged by his brother to kill the Polish Helena. Instead, Vasyl ends up killing his own brother with an axe.

Shortly thereafter, however, it is the Poles’ turn to be barbaric. They kill Helena’s whole family, including her for marrying a Ukrainian. Zosia escapes again, hiding in the woods with her son.

The film’s final scene shows her on a long dirt road, lying in the back of a horse-drawn cart, her and her son being transported by a kindly young man who found them in the woods. And the following wording is displayed on the screen: “In the period of 1943-45 an estimated 80 to 100 thousand Poles and 10 to 15 thousand Ukrainians had fallen victim to Ukrainian nationalists’ attacks and Polish retaliations in the Eastern Borderlands” (According to various historical sources, these estimates seem a bit high, but a joint Polish-Ukrainian conference in 1994 agreed that 50,000 Polish deaths was a moderate estimate).

The second film on Amazon Prime, Habermann, is a 2011 Czech-German film that reflects tensions between Czechs and Germans in the Sudetenland area bordering Germany and Czechoslovakia during the years 1938 to 1945. This border region was part of Czechoslovakia from 1918 until 1938, when Hitler it annexed. On the the first page of his Mein Kampf [1925], Hitler had written that all German speaking people should be united in an enlarged Germany. In March 1938 he began this process by absorbing (German-speaking) Austria to Germany. Later that year, in late September, he got the governments of England and France to “appease” him (in the infamous Munich Agreement) by agreeing that the Sudetenland, where ethnic German speakers were in the majority, was to be given to Germany.

August Habermann is a Sudeten German sawmill owner whose family has run the mill for generations. He is married to the Czech Jana, whose father (unbeknownst to her) was Jewish. They have a young daughter. August’s best friend is a Czech forester named Jan Brezina, who is married to Martha, an ethnic German. Most of the employees at the mill are ethnic Czechs, and August treats them fairly. But he begins having major problems after the German takeover, when SS Major Koslowski starts making demands on him and the sawmill and complains that Habermann employs mainly Czechs as opposed to Sudeten Germans.

The film then displays various examples of Nazi cruelty--for example, Major Koslowski demands that Habermann select 20 Czech civilians for execution to avenge the deaths of two German soldiers, and Habermann’s wife Jana is sent to a concentration camp. It also shows various examples of Czech resentment of Nazi control. Although some Sudeten Germans like August Habermann are unhappy about Nazi demands, others, like his younger brother Hans, who joins the German army, are fervent Nazi supporters.

The movie’s final scenes, like its opening one that foreshadows them, display the violent wrath (including killing) of the Czechs against their Sudeten German neighbors after the Nazis pull out in 1945. Unfortunately for August, the local Czechs blame him for cooperating with the Nazis. They even direct their hatred at his Czech wife, Jana, who has been freed from the concentration camp. “Habermann’s whore,” they call her.

Like Hatred, Habermann visualizes for its audiences many unpleasant truths about how beastly we humans can be to one another. According to the Czech historian Tomas Stanek, in Verfolgung [Persecution]1945, from May until early September 1945, Czechs brutalized and killed hundreds of thousands of Sudeten Germans as they drove them out of Czechoslovakia.

As we watch all this ethnic hatred on display, we naturally ask ourselves, why?  How can we act so inhumanely toward other human beings?

In Chapter 1, “A Century of Violence,” of my An Age of Progress? Clashing Twentieth-Century Global Forces (2008), I attempted to explain ethnic and other 20th- century violence. In doing so, I cited the Nobel-Prize winning economist Amartya Sen, who wrote that much of it flowed from “the illusion of a unique and choiceless identity,” for example, that of nationality, race, or class. He added that “the art of constructing hatred takes the form of invoking the magical power of some allegedly predominant identity that drowns other affiliations and in a conveniently bellicose form can also overpower any human sympathy or natural kindness that we may normally have.”

I also indicated that

there are many reasons why the deaths of foreigners or those considered fundamentally different seemed to matter much less to people than the deaths of those more similar. . . .  It is natural for people to feel more compassion for those closer to them--for family members, neighbors, or members of a group or nation with whom they identify. In addition, in the case of a nation or state, patriotism and nationalism were often reinforced by education, by media, and by social and cultural rituals such as the singing of national anthems, and, especially in wartime, by government propaganda. (For more of my thoughts on the motivations for violence and the dehumanization that often precedes it, see here.)

Looking specifically at the two films reviewed here, the focusing on past grievances and an ideology of ethnic nationalism are two main causes of much of the bloodshed. Volhynian Ukrainians remembering Polish government and individual mistreatment of them in the first film, and Czech revenge for Nazi oppression in the second are main factors.  In an interview about his Volhynian film, director Wojciech Smarzowski said it’s “ against extreme nationalism. The film is a warning–it shows what a human being is capable of doing when equipped with a relevant ideology, political or religious doctrine and is allowed to kill.”

I have often written against any nationalism, dogmatism, or ideology that makes us less tolerant of others. And I closed a recent essay with the hope that the USA could be “a land of many ethnic groups and various believers and non-believers [who] can live harmoniously together, can become “stronger, not in spite of its many elements, but because of them.”

How exactly to do so is complex, but a starting point might be to look at the example of the South Africans Nelson Mandela and Archbishop Desmond Tutu, who in the 1990s respectively created and chaired a Truth and Reconciliation Commission, which attempted to move South Africa’s Whites and Blacks beyond the cycle of violence and counter-violence.