Tom Standage is deputy editor of The Economist and author of A History of the World in 6 Glasses. His new book is A Brief History of Motion: From the Wheel, to the Car, to What Comes Next (Bloomsbury). 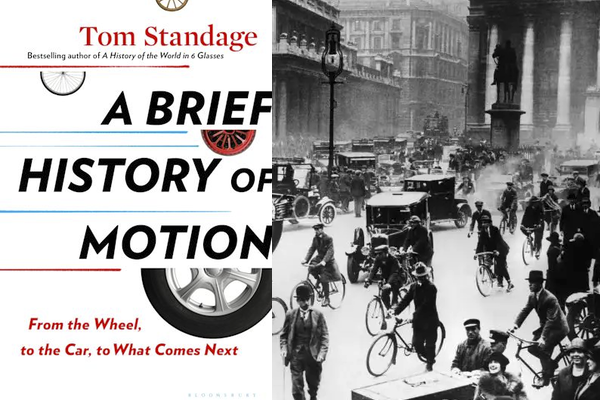 Most of those killed on America’s roads in the early twentieth century were pedestrians, and most of those pedestrians were children. Although drivers involved in fatal accidents faced heavy fines and were often charged with manslaughter, such sanctions seemed to have little effect. As the death toll rose, public outrage found expression in hostile newspaper coverage of dangerous drivers. Reports of accidents frequently contrasted the innocence of victims (whether children, young women, or the elderly) with the guilt of drivers (often drunk, speeding, or criminals fleeing the scene of a crime). “In the view of some of the press, the automobile is today a juggernaut, a motoring speed-monster, intent on killing and maiming all who stand in its way,” one chronicler of the industry noted with despair in 1916. Drivers were depicted as deliberate “killers” or “murderers.” Cartoons showed the grim reaper behind the wheel. Pedestrians complained that cars had invaded the streets and deprived them of their former rights and freedoms. Because people had previously been free to step into the streets whenever they liked, the onus was on motorists, as newcomers, to avoid collisions—so drivers were widely assumed to be at fault in any accident.

Safety campaigners organized marches in many American cities, calling on motorists to exercise more caution. The National Safety Council (NSC), an existing body that oversaw workplace safety, expanded its remit to address road safety as well. Many women joined its affiliated local councils to campaign for safer roads and greater protection for children, transforming a business-oriented organization into something more like a social movement. Cities began to observe “Safety First” weeks, in which local chambers of commerce, the police, Boy Scouts, schools, churches, and newspapers worked together with safety councils and local auto clubs to promote road safety. Auto clubs took part because they were keen to be seen as part of the solution, not part of the problem; they blamed accidents on a small number of inconsiderate drivers. The expansion of road-safety campaigns in America was overseen by Charles Price, a former salesman who was put in charge of reducing accidents at an agricultural machinery company. Price swiftly reinvented himself as a safety expert and had become head of the NSC in 1919. Regular safety campaigns were taking place in fifty American cities by 1923.

As well as demonizing dangerous drivers, safety campaigns also memorialized children, like soldiers who had fallen in war. Detroit adopted the custom of ringing church bells after each road death, and announcing the victim’s name in schools. In Memphis, the safety council put up a black flag wherever a child was killed on the roads. Baltimore’s innovation, in 1922, was a giant monument in wood and plaster, twenty-five feet tall, painted to resemble a stone war memorial and bearing the names of 130 children killed by cars in the previous year. That same year New York held a safety procession of 10,000 children, including a “memorial division” of 1,054 children, each of whom represented an accident victim killed during 1921. A delegation of Boy Scouts carried a papier-mâché tombstone, and open-top cars conveyed children who had been maimed in road accidents. The safety parade in Washington, D.C., included a group dressed up as shroud-wearing corpses; that in Louisville had models of coffins and skeletons. In St. Louis, an airship dropped flowers around a newly unveiled safety monument as a band played a dirge. “Drivers of automobiles must be taught to adhere to the doctrines of the St. Louis Safety Council,” said the mayor in his speech.

Yet although everyone supported the idea of safety, there was no consensus about exactly what that meant in practice. To keep the unlikely coalition of campaigners, industry interests, and car clubs together, safety campaigns were rather vague, emphasizing the importance of caution and adherence to local safety rules. But these rules varied widely, as different cities took different approaches. In many places, the police imposed speed limits, typically of 10 mph or less, though these were difficult to enforce, and in some cases were so low that they could not be obeyed without causing cars’ engines to stall. Some cities experimented with one-way streets to regulate the flow of traffic; in others, horse-drawn vehicles were given right of way over motor vehicles. Whether motorists had to defer to pedestrians, or vice versa, also varied from place to place or was left unspecified beyond general appeals to common sense and “safety first.” Little wonder the result was deadly chaos.

Efforts to formalize the rules of the road had first begun in 1900 in New York, which led the way because it had the most vehicles of any American city—and because it was the home town of an eccentric billionaire with an unusual obsession for traffic regulation. William Phelps Eno inherited a fortune in 1899 from his father, and rather than going into the family real estate business, he devoted himself instead to the cause of road safety, publishing a manifesto on the topic in January 1900. Though few motor vehicles were on the streets in New York, he could see that automobiles were likely to grow in number and wanted to preempt any problems that might arise. He was confident that “properly understood and regulated, several times the present traffic in our streets could go on with less delay, more safety and more comfort than what there is now.” Eno established himself as an expert in “scientific” traffic management, despite having dropped out of college and having no formal qualifications.

In 1903 he had one hundred thousand copies printed of his four-page pamphlet, “Rules of Driving,” after officials in New York City agreed to distribute it and adopt its rules. Eno’s motto was ex chao ordo (order from chaos), and his rules chiefly consisted of a formalization of existing customs. Motorists were directed to drive on the right and pass on the left; to use hand signals when turning; to yield to emergency vehicles; and not to exceed a “safe and proper” speed (though no actual figure was given). But Eno also threw in a few ideas of his own. His most important innovation was the notion of the “wide” or “outside” turn— that when turning left, drivers should not simply swerve across the road and cut off the corner, but turn as late as possible, as though driving around an imaginary post in the center of the road. Indeed, at Eno’s suggestion, posts were installed at some junctions in New York in 1904 as a reminder of “the necessity of passing around the central point.”

As other cities began to adopt traffic regulations of their own, they borrowed some of Eno’s rules from New York, and in particular that of the outside left turn, which became standard practice. In 1915, as part of the mobilization for the First World War, national traffic rules were drawn up for the first time, and Eno got the outside left turn included. This prompted many cities to install posts or signs in the center of inter- sections, often marked with the words keep to the right. This was the first example of street furniture that told drivers what to do, instead of assuming they were familiar with the local traffic rules. By specifying the path a vehicle should take as it rounded a corner, and forcing it to slow down, these signs, which came to be known as silent policemen, improved safety for pedestrians. They were also much cheaper than stationing a police officer to act as a “cornerman” to regulate traffic at a busy junction, something that many cities were starting to find increasingly costly.

But although there was general agreement about the outside left turn, the devices used to enforce it varied from one city to another, confusing motorists who ventured away from their hometown. “If we were to collect specimens of traffic control devices from those cities where traffic regulation is active, we could fill a museum with signs and signals, no two of which would be alike in color, shape, size or marking,” noted a report on traffic control written in 1923. Some cities made their own silent policemen; others bought them from a thriving community of entrepreneurs who saw a lucrative market opening up and hoped their devices would become the national standard. They touted their wares to city officials at trade fairs such as the Good Roads Show, held in Chicago in 1922, where many variations on the silent policemen were on display, in a range of shapes and sizes, some illuminated, some not. There was plenty of scope for improvement because wooden posts were all too easily knocked down by careless (or malicious) drivers.

The City of Milwaukee found itself having to replace four hundred silent policemen every year and had given up on the idea by 1923 in favor of a local innovation: the Milwaukee mushroom. This perforated cast-iron dome, rather like an inverted colander, was fixed to the center of an inter- section and illuminated from below. Motorists would drive around it, as they did with silent policemen, but advocates of the mushroom pointed out that if struck by a passing vehicle it would stay put, providing a warning jolt to the driver but doing no damage to the vehicle. Some judges had ruled that cities were liable for damage caused to vehicles that struck silent policemen, so this was an attractive feature. The mushroom seems to have been pioneered in Detroit a few years earlier, but without illumination; the illuminated “Milwaukee-type” mushroom proved popular for a few years in the 1920s, with several firms manufacturing competing versions. One model was even spring mounted, allowing it to retract into the road if a vehicle passed over it. Of the various competing forms of street furniture, however, mushrooms did not prove to be long-term survivors. Another device ended up ruling the streets: the traffic light.

This excerpt of A Brief History of Motion: From the Wheel, to the Car, to What Comes Next is published with permission by Bloomsbury.