Walter G. Moss is a professor emeritus of history at Eastern Michigan University, a Contributing Editor of HNN, and author of  A History of Russia. 2 Vols. For a list of his recent books and online publications click here. 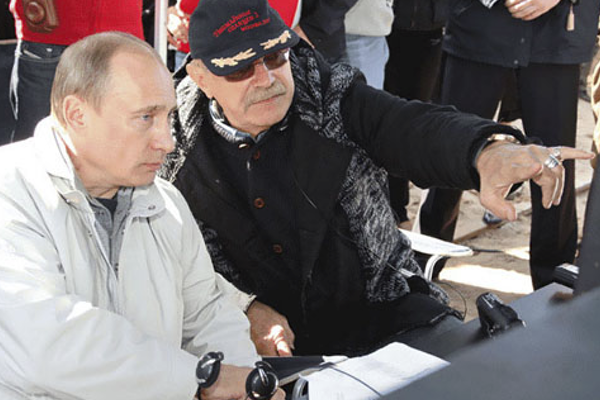 Russian director Nikita Mikhalkov with Vladimir Putin on the set of "Burnt By the Sun 2," 2008.

A recent viewing of Nikita Mikhalkov’s Sunstroke (2014) on Amazon Prime got me reflecting on this famous contemporary Russian director as well as Ivan Bunin (1870-1953), the author of the short story of the same title which inspired the film.

While the director is a great admirer of Russian President Vladimir Putin (a former Communist KGB officer), the earlier writer wrote Cursed Days, a scathing criticism of the Russian Communists during their revolution and civil war, and emigrated from Russia in January 1920. But what Mikhalkov and Bunin before him both possess (and Putin also shares) is a peculiar nostalgia for certain aspects of old tsarist Russia.

All three men are major figures in the last century and a quarter of Russian history. By 1900 Bunin had already written his first stories and poetry and was a friend of some of the most famous writers of his day, for example, Tolstoy, Chekhov, and Gorky. In 1933, he became the first Russian writer (although now an emigré living in France) to receive the Nobel Prize for Literature--first awarded in 1901. Primarily known for such short stories as “The Gentleman from San Francisco” and “Sunstroke,” Bunin also wrote novels (e.g., The Village) and poetry, as well as non-fiction like “About Chekhov.” Mikhalkov is the “most famous living Russian director.” His Burnt by the Sun won a U.S. Academy Award (1995) for Best Foreign Language Film, and he has directed more than 20 films. In addition, he has been active in various other realms--acting (about two dozen films), producing, heading the TriTe film studio and the Russian Filmmakers’ Union, and occasionally speaking out for what he likes to think of as an enlightened Russian conservatism. Putin, of course, has been Russia’s chief political leader since the resignation of Boris Yeltsin at the end of 1999.

Regarding Bunin’s nostalgia, an Italian scholar, D. Possamai, has written, “there is no doubt that the sense of melancholic nostalgia for a Russia that no longer exists is one of the key stylistic features in Bunin’s works.” The scholar writes that this is primarily true in his short fiction and cites his “Antonov Apples” (aka “The Scent of Apples”), which first appeared in 1900, as a prime example. Other scholars such as V. Terras (Bunin “is a nostalgic writer” and M. Slonim (the emigre Bunin was a “seeker after things past and gone”) also highlight his nostalgia.

We can also sense it in “Sunstroke,” the 1925 story upon which the Mikhalkov film is based. A lieutenant stands on a summer night at the railing of a Volga River paddlewheel steamship; he suggests to a small, attractive woman he has met just hours before that they get off at the next stop. They do so and take a carriage, through a small provincial town, to an inn, where they make love in a large room with white curtains, still “smoldering from the day’s sun.” Their first kiss was so delirious “that for many years they remembered this moment, and neither one experienced anything like it for the rest of their lives.” But the next morning she insists on resuming her river journey while he stay behind. He agrees, but soon realizes “ he would never see her again, this thought overwhelmed and astonished him. No, it can’t be! It was too bizarre, unnatural, unbelievable! And he felt such pain and such a sense of how useless the rest of his life would be without her, that he was gripped by horror, despair.” In the evening, he boards another Volga ship. Bunin’s final sentence reads, “The lieutenant sat on the deck under the awning feeling like he’d aged ten years.”

In his film, Mikhalkov interweaves this story, displayed in appealing colors, into another, presented in darker, somber tones, about hundreds of White Army officers who have surrendered to Red (communist) forces near the end of the Russian Civil War in 1920. The lieutenant of Bunin’s story is now one of these White officers held at an internment camp near the Black Sea, and his Volga adventure is displayed in flashbacks. Mikhalkov provides both sympathetic and unsympathetic characters on both sides of the conflict, and suggests what personal defects led the lieutenant and other Whites to loose the war. But his main conclusion seems to be that the civil war was a Russian tragedy. At the end of the film, the following words are flashed on the screen: “From 1918 to 1922, only in the South and the Crimea, Russia lost more than 8 million of its people.”

Regarding Mikhalkov’s nostalgia, Birgit Beumers has written in her Nikita Mikhalkov: Between Nostalgia and Nationalism (2005), “The overall argument of this volume is that Mikhalkov performs a shift from a nostalgia for a past that is openly constructed as a myth to a nostalgia for a past that pretends to be authentic. I contend that this move is a result of the collapse of the Soviet value system . . . and the director’s inability to face up to the reality of the 1990s, when he turned both past and present into a myth that he himself mistook for real and authentic.”

Beumers chronicles Mikhalkov’s development from his first full-length film, At Home Among Strangers (1974), up until Dark Eyes (1987), starring the Italian actor Marcello Mastroianni.  She believes the first typifies his early approach to basing “his work not on the historical facts but on a myth.” But the second moves “away from the reflective or ironic nostalgia of his earlier films towards a restorative nostalgia that tends towards nationalistic revival.”

Mikhalkov’s most acclaimed film, at least outside Russia, was his award-winning Burnt by the Sun (1994). Like his later Sunstroke, it is complex and reflects positive and negative aspects of both tsarist and Soviet Russia. Unlike Sunstroke, he is also one of the chief actors in this earlier work, portraying the communist officer Kotkov. Beumers concludes that Kotkov does not destroy “the beauty of Russia” inherited from the tsarist period, and quotes Mikhalkov as saying, “‘Yes, Bolshevism has not brought happiness to our country. But is it morally correct on the basis of this indisputable fact to put under doubt the life of entire generations only on the grounds that people happened to be born not in the best of times?”

Beumers adds that Mikhalkov “longs for a past when it was possible to believe in ideals,” but that he realizes that on the day portrayed in his film at the beginning of the Great Terror of 1936-38, “they are about to disappear. . . . By casting himself as a kind Bolshevik commander, who believes in the ideals of the Revolution and, furthermore, is a perfect father to his child, he offers himself in the role of a leader of the people, but one who would return to the roots of socialism . . . . This confusion of fiction and reality leads to the portrayal of a political Utopia, which Mikhalkov would

gradually mistake for an authentic ideal.”

Mikhalkov’s next important film was The Barber of Siberia (1998), which was a box-office hit in Russia. It appeared the same year as the remains of the last tsar, Nicholas II, and his family were reburied in St. Petersburg, and its nostalgic toward the reign of Nicholas’s father, the reactionary tsar (1881-1894) Alexander III, who is played by none other than Mikhalkov himself. Through the character of an American woman, Jane Callaghan (English actress Julia Ormond), the moral bankruptcy of the West is symbolized and contrasted to the moral superiority of Russians like Alexander III.

Although Mikhalkov directed other films between his 1998 one and his 2014 Sunstroke, including 12, a remake of 12 Angry Men (1957), a more significant work of his (at least for this essay) was his 2010 political manifesto, 63 pages that reflect his nostalgic nationalism and conservatism. It praises “law and order,” state power and loyalty to it, and the Russian Orthodox Church. It also considers Russia-Eurasia as “the geopolitical and sacred center of the world.” Although it mentions the Stalinist terror, Mikhalkov considers the overall achievements of the Soviet era more important.

Mikhalkov’s view are very close to those of Putin’s (for the similarities see my two 2015 essays, “Vladimir Putin: History Man?” and “Is Vladimir Putin an Ideologue, Idealist, or Opportunist?”). Since 2015, two further indications of his nostalgic nationalism have been his comments during a 2017 unveiling of a Crimean monument to Alexander III--the same tsar Mikhalkov played in The Barber of Siberia--and Putin’s long 2021 essay on “On the Historical Unity of Russians and Ukrainians.”

Speaking on Alexander III in Crimea (annexed by Russia in 2014 after earlier being part of Ukraine), Putin said:

We are unveiling a monument to Alexander III, an outstanding statesman and patriot, a man of stamina, courage and unwavering will.

He always felt a tremendous personal responsibility for the country’s destiny: he fought for Russia in battlefields, and after he became the ruler, he did everything possible for the progress and strengthening of the nation, to protect it from turmoil, internal and external threats. . . .

The reign of Alexander III was called the age of national revival, a true uplift of Russian art, painting, literature, music, education and science, the time of returning to our roots and historical heritage. . . .

He believed that a strong, sovereign and independent state should rely not only on its economic and military power but also on traditions; that it is crucial for a great nation to preserve its identity whereas any movement forward is impossible without respect for one’s own history, culture and spiritual values.

In his essay “on the historical unity of Russians and Ukrainians,” Putin stressed all in the past that had united the two peoples, and downplayed all that divided them (e.g., “Ukraine's ruling circles decided to justify their country's independence through the denial of its past. . . . They began to mythologize and rewrite history, edit out everything that united us, and refer to the period when Ukraine was part of the Russian Empire and the Soviet Union as an occupation. The common tragedy of collectivization and famine of the early 1930s was portrayed as the genocide of the Ukrainian people.”)

In her The Future of Nostalgia (2001), Svetlana Boym wrote that “the nostalgic desires to obliterate history and turn it into private or collective mythology.” In the case of Mikhalkov and Putin (less so with Bunin) their type of nostalgia does not so much “obliterate history,” but attempts to mythologize it to justify present political goals.

In doing so they are far from unique among modern cultural and political leaders. In his perceptive portrait of Ronald Reagan, Reagan's America: Innocents at Home (1998), Gary Wills described the former actor who became president as the “sincerest claimant to a heritage that never existed, a perfect blend of an authentic America he grew up in and of that America’s own fables about its past.” Similarly, Donald Trump’s slogan “Make America Great Again” attempted to appeal to a nostalgia grounded more on myth than historical reality. Beyond Russia and the USA, as a 2019 Foreign Policy essay noted, “The problem is that the world is now primarily dealing with a toxic restorative nostalgia. . . . In many ways, nostalgic nationalism is the political malaise of our time.”