"The Essential Kerner Commission Report" Links Past and Present, but Abridges the Committee's Process 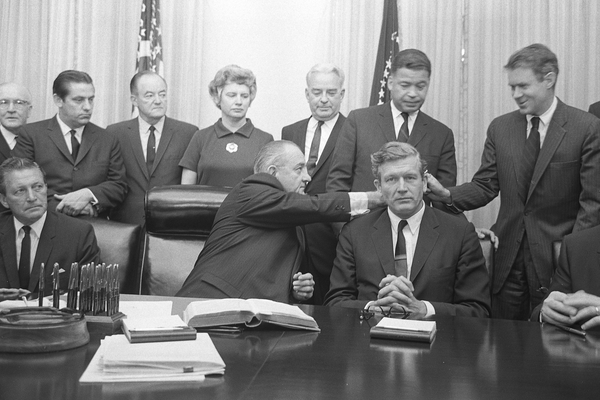 President Lyndon Johnson with members of the Kerner Commission, 1967.

In February 1968, with the publication of the landmark Kerner Commission Report, white America had a chance to acknowledge the fact of four centuries of systemic racism. It turned away.

Formally titled The National Advisory Committee on Civil Disorders, but popularly known for its chair, Governor Otto Kerner of Illinois, the group’s report was issued on March 1, 1968. The report’s conclusion, that a series of inner-city riots (e.g. Watts, Newark, Detroit) were the result of pervasive discrimination in jobs and housing caused by “white racism,” shocked the country.

The report blindsided President Lyndon Johnson, who had appointed the committee in July 1967. He hoped the committee would acknowledge his administration’s civil rights programs, call for some new federal programs and blame “outside agitators,” possibly Communist-led, for the urban violence.

Instead, the report warned that our nation “is moving toward two societies, one black, one white—separate and unequal.”

It went on to attribute the problem of pervasive discrimination against Black citizens to “white racism,” one of the first times the term had appeared in an official document.

This stunning conclusion— that the so-called “Negro problem” was actually a problem of white racism—instantly became headline news in TV, newspapers and magazines. Bantam Books rushed the full 680-page report into print as a paperback and sold 700,000 copies in a few weeks.

Unfortunately, the report was soon forgotten as the nation descended into chaos in the turbulent year of 1968. Dr. Martin Luther King’s assassination on April 4 triggered a new round of rioting in dozens of cities. On June 6, Senator Robert F. Kennedy was killed after winning the California primary. All the while, the Vietnam War raged, with 17,000 U.S. soldiers dying in that year alone.  In November, Richard Nixon was elected president; his administration quietly began dismantling many of the Johnson-era social programs.

A New Version of the Report

Now, 53 years later, the 1968 report has been republished in an abridged version titled The Essential Kerner Commission Report. The 2021 edition comes with an 18-page introduction by Jelani Cobb, a Black staff writer at The New Yorker and a professor at the Columbia School of Journalism.

Cobb, working with Matthew Guariglia, a policy analyst, has summarized the lengthy original report into a more accessible 250-page version. In the new book’s introduction and in a six-page appendix of frequently asked questions, they have tied the findings of the original report to recent events, specifically the 2016 election of Donald Trump, the rise of Black Lives Matter, the 2020 death of George Floyd.

Cobb notes that the Kerner Report findings “exist alongside those of the Warren and 9/11 Commissions among the handful of governmental reports whose historic import has outlived the moment in which they were issued.”

While the introductory and FAQ sections of the new book do a good job of framing the Kerner findings for the contemporary reader, their brevity leaves out a good deal of background on why Johnson chose the 11 commission members and how they deliberated before reaching their stunning findings.

Readers wishing to learn more about these issues can turn to Separate and Unequal: the Kerner Commission and the Unraveling of American Liberalism (2018) by Steven M. Gillon, a history professor at the University of Oklahoma.

As Gillon documents, President Lyndon Johnson appointed the commission in July 1967 just days after the Detroit riot ended. Announcing its formation, Johnson said he was looking for a “genuine, long-range solution” to end the problems facing Black Americans which included “discrimination, slums, poverty and not enough jobs.” Secretly, he was hoping the commission would also find that the series of urban riots that flared up in a half dozen Northern cities were caused by “outside agitators” and that a new set of government programs might be a cure-all.

When the commission finally published its report 10 months later, it blindsided Johnson. Instead of congratulating the administration for its work on civil rights, it warned presciently that “white racism is essentially responsible for the explosive mixture in the nation’s cities.”

The Kerner report criticized city police departments, calling out “police brutality and harassment.” It called for the hiring of more black officers and the creation of community-based police review boards.

The reported also faulted the nation’s news media, which it pointed out, was basically an all-male and all-white fraternity. As a result, almost all media reporting on the Black community  “reflects the biases, the paternalism, the indifference of white America.”

On March 1, 1968, the day the report was officially released, President Johnson took a last-minute trip to Texas. For weeks, he publicly said nothing about it, while privately raging that the politicians on the commission had stabbed him in the back.

In the short-term, the report contributed to a “white backlash” against the demands of the Black community. Public opinion polls found that 53% of whites condemned the conclusion that racism was the root problem of Black poverty and discontent; 58% of Blacks supported the findings.

Today, the report seems prescient in its findings on the causes of Black frustration and the role of systemic racism in the nation’s economic and social policies.

At the historic March on Washington for Jobs and Freedom in August 1963, Dr. Martin Luther King observed that “the arc of the moral universe is long, but it bends toward justice.”

The Kerner Report made a small push on the arc. Had it not been eclipsed by political assassinations, a bloody war and the election of Richard Nixon, it might have generated more attention and resulted in an earlier recognition among the white population of the problem of systemic racism.