Can a New Labor Movement Grow and Win with Direct Action Instead of Collective Bargaining?

Lawrence S. Wittner is professor of history emeritus at SUNY/Albany and a member of the executive committee of the Albany County Central Federation of Labor (AFL-CIO). 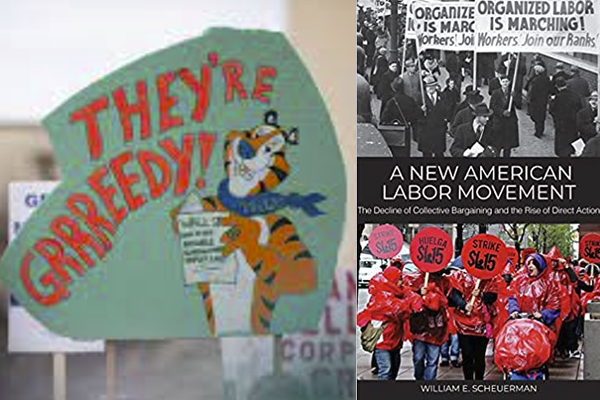 A New American Labor Movement: The Decline of Collective Bargaining and the Rise of Direct Action

During 2021, there were signs of growing militancy in America’s beleaguered union movement, as thousands of workers went out on strike at John Deere, Kellogg’s, Nabisco, Frito-Lay, Volvo, Frontier Communications, New York University, and Columbia University, as did thousands more from the ranks of union carpenters, hospital workers, airport workers, and coal miners.

Even so, William Scheuerman argues in this new, groundbreaking book, U.S. unions are in deep trouble and, acting alone, they “cannot deliver a resurgent labor movement.”

Scheuerman is well-qualified to deal with labor issues for, in addition to his academic credentials as professor emeritus of political science at SUNY/Oswego, he served as president of United University Professions (the largest higher education union in the United States) for 14 years and as president of the AFL-CIO’s National Labor College for another two.

The grim picture of U.S. unions painted by Scheuerman in A New American Labor Movement is one that many union activists privately acknowledge.  Union density in the nation has sharply fallen over the years, dropping from 34.8 percent of the workforce in 1954 to 10.8 percent in 2020.  Furthermore, the recent upsurge of strike activity comes as a surprise only because it counters the long-term decline in the number of strikes and strikers in the nation.  Rather than being on a march to power, most U.S. unions are engaged in a struggle for survival.

Why has this occurred?  Scheuerman argues persuasively that “big business and its cronies are waging an all-out war against organized labor as the last bastion of resistance against corporate hegemony.”  In this war, corporations have prevailed by closing U.S. manufacturing plants and investing overseas, fiercely resisting union organizing drives, firing union activists, vastly outspending unions in political campaigns, turning labor law against unions, and creating a gig economy.

Nor does Scheuerman let unions off the hook.  Frequently, he charges, they have been led by bureaucratic, out of touch leaders, competed with one another for new members, and fallen short of the solidarity that they praise.  Indeed, labor leaders have too often conflated the survival of their own unions "with the survival of the union movement itself.”  But unions’ fundamental problem, he argues, is that, given the corporate-government assault upon them, their “organizational structure no longer serves the mission of the labor movement.”

Even so, Scheuerman contends, all is not lost in the struggle for workers’ rights, for a variety of pro-labor social movements have begun successful operations outside traditional union structures.  And, in this detailed, convincing study, he shows how these movements, frequently working in alliance with unions, are laying the groundwork for a more flexible, dynamic, and effective labor movement.

The new social movements have made particularly impressive gains among the nation’s 2.4 million farmworkers—long plagued by pathetic wages, wage theft, terrible working conditions, miserable housing, and physical and sexual abuse.  Deliberately omitted from coverage by the National Labor Relations Act and labor laws in most states, these workers, often immigrants and migrant laborers, have faced enormous difficulties forming unions.  Although the small United Farmworkers and the tiny Farm Labor Organizing Committee have had some union organizing success and, as a result, have significantly improved the lives of the small numbers of workers they represent, the most recent breakthroughs for farmworkers’ rights, Scheuerman notes, have resulted from campaigns outside the union movement—by the Coalition for Immokalee Workers (CIW) and New York State’s farmworker movement.

The CIW, organized in the 1990s to assist Florida’s horribly exploited tomato pickers (some of whom were kept in actual slavery), is a non-hierarchical organization, with farmworkers involved in all its decisions, staff wages tied to field work, and all staff members working in the fields from May until September.  Recognizing that the growers’ pathetic payments to workers often reflected the low price for tomatoes set by major fast food chains, the CIW launched a very effective boycott campaign against Taco Bell, McDonald’s, and other tomato purchasers.  In this fashion, the CIW eventually secured a Fair Food Program that covered 90 percent of Florida-grown tomatoes and significantly improved farmworkers’ wages and lives.  If the CIW had been a union, Scheuerman points out, this would not have been possible, for unions are prohibited by law from conducting secondary boycotts.  Moreover, not all of CIW’s boycott partners were fans of unions.

In New York State, a Justice for Farmworkers (JFW) campaign began in 1989, drawing together sympathetic religious, community, and labor groups.  Like the CIW, the JFW was not a union.  But, unlike the CIW, it sought legislation that would provide farmworkers with the same labor rights enjoyed by other workers in the state.  Ultimately, after a lengthy struggle, the state legislature passed a farmworkers’ Fair Labor Practices Act in 2019.  It guaranteed the state’s 56,000 farmworkers collective bargaining rights, the state’s hourly minimum wage, overtime pay, a day of rest every week, and eligibility for unemployment insurance, paid family leave, and workers’ compensation benefits.

Scheuerman also emphasizes the importance of the rise of worker centers—community-based, nonprofit organizations that, unlike unions, do not bargain with employers but, instead, serve as support hubs for low wage, unorganized workers.  In the early 1990s, only about five of these centers were in operation.  But their number has now soared past two hundred.  Thanks to the decline of unions and corporate America’s increasing reliance on employing workers lacking a permanent job status, worker centers have become hotbeds of organizing among these new gig workers.

In California, Uber and Lyft rideshare drivers, angry about low wages, working conditions, and classification as independent contractors, created “virtual” worker centers that facilitated demonstrations, strikes, and protests.  Thanks to their spirited campaign, the California legislature passed a law reclassifying them as employees, and thus eligible for the rights guaranteed to workers, including collective bargaining.  But Uber and Lyft, drawing upon their vast financial resources, pushed through a referendum that scrapped the legislation.  Even so, Scheuerman contends, the strategy and the mobilization demonstrated by the drivers indicate the potential power of new approaches to worker organizing and political action.

One of the largest of the new worker centers is the Freelancers Union.  Although the name is a misnomer—for, in fact, it is not a union—the Freelancers Union has substantial appeal to the growing number of independent workers in the nation’s gig economy, and today claims half a million members.  According to a survey, 70 percent of them engage in professional or semi-professional service work.  Rather than battling to end these workers’ precarious status, the Freelancers Union simply provides them, at a cut rate, with the services that they lack and need, such as health insurance.  Although it won a major legislative victory in New York City, where legislation passed in 2017 gives freelancers the right to written contracts, timely payment, and freedom from retaliation, for the most part the organization has avoided political action.  This apolitical stance, plus the Freelancers Union’s top-down structure and failure to directly confront employers, lead Scheuerman to designate it “an outlier within the developing new labor movement.”

The daring struggles of fast food workers are more in line with traditional norms of workers’ collective action and solidarity, although these workers, too, operate outside the official union structure.  In November 2012, hundreds of underpaid fast food workers from about forty New York City stores walked off their jobs and took to the streets, demanding $15 an hour and union rights.  The Fight for $15, as Scheuerman notes, “soon became a tsunami spreading across the country to more than 300 cities.”  Not only were the wages of these workers abysmally low, but they suffered from unpredictable scheduling, wage theft, arbitrary firings, and sexual harassment.  Although considerable union money went into the campaign (most notably, $70 million from the Service Employees International Union), it continues to be almost impossible to organize significant numbers of fast food workers into unions.  Nevertheless, their one day strikes, civil disobedience actions, and flamboyant public campaigns did lead to substantial wage gains, thanks to state government or corporate action, and also helped convince most Americans to support a $15 an hour minimum wage.

Observing that these labor upsurges have occurred in industries where unions have found it nearly impossible to organize on a workplace-by-workplace basis, Scheuerman suggests that they point to the need for sectoral bargaining.  This industry-wide negotiation of wage and other labor standards for union and non-union workers is common in European democracies, and encourages firms to compete by increasing productivity rather than by cutting wages and benefits in a race to the bottom.  Local “shop floor” concerns, he notes, such as work rules, due process, and steps for promotion, can be handled by worker centers.

Scheuerman has other recommendations, as well.  Through legislative action, he maintains, the nation should create a strong social safety net and, also, reform American labor laws to “open the door to union membership for the millions who want it.”  Furthermore, the labor movement should turn to “visionary leaders who will put the interests of workers before the interests of their own organizations,” encourage rank-and-file participation in union governance and activities, and work closely—rather than in competition—with other unions.

This is an ambitious agenda, and it is far from clear that it can be realized.  A number of questions spring to mind.  For example, as union support has often been crucial to the success of the new, pro-labor, direct action social movements, can these movements survive if unions continue to decline in membership, resources, and political clout?  Also, what if the federal and state governments, in response to corporate pressure, crack down on the new social movements as effectively as they have done on the unions?  Finally, given the global mobility of capital through banks and multinational corporations, doesn’t the successful defense of workers’ interests necessitate moving beyond a national labor movement to an international one?

Nevertheless, despite these potential pitfalls, this creative, thoughtful, and well-researched study of the U.S. labor movement gets to the heart of its major problems and potential.  In this time of growing corporate domination of the United States and of the world, A New American Labor Movement illuminates a useful path forward in the long and difficult struggle for workers’ rights.