How Poland's Solidarity Rejected the Temptation of Violence 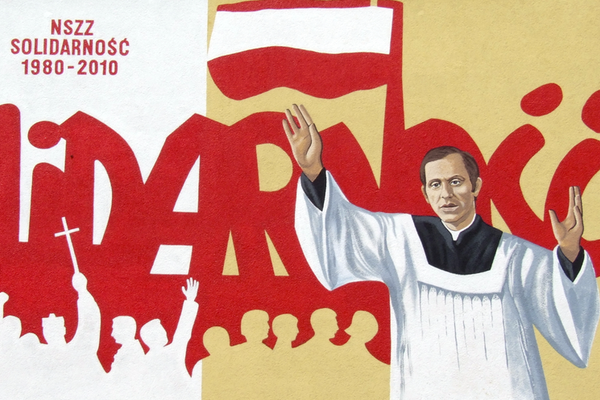 Jerzy Popieluszko, a Catholic priest who supported the dissident Solidarity movement, was killed by three internal security agents in 1984.

One of the biggest challenges to sustaining a non-violent campaign is persuading large numbers of people to remain peaceful even in the face of government retaliation. The moment of violence, or the aftermath of bitterness, can start a cycle of vengeance in which protestors are lured into a confrontation with superior government force.

The Solidarity movement, which ended up toppling the Polish communist government, is an example of a successful non-violent resistance movement. Solidarity was a broad, anti-authoritarian social movement that featured collaboration between intellectuals, workers and the Catholic Church. It used methods of peaceful civil resistance to advance the causes of workers' rights and social change.

Government attempts in the early 1980s to destroy the union through the imposition of martial law in Poland and the use of political repression failed. Operating underground, with significant financial support from the Vatican and the United States, the union survived and by the late 1980s had entered into negotiations with the government.

It is worth exploring how the Polish people maintained a peaceful stance despite repeated provocations, as the reasons may be applicable when analyzing future resistance movements around the world. I would argue that there are three main reasons why the Solidarity movement was able to remain non-violent.

The need for protests to remain non-violent was partly a response to external threats. The Polish people had seen how the Hungarian Uprising of 1956 and the Prague Spring of 1968 had been brutally suppressed. With this is mind, the leaders of Solidarity argued that for social self-organization to be effective, people had to keep their destructive emotions at bay.

Polish intellectuals who looked back at past reform efforts concluded that any real change had to come from civil society, rather than elites, given their propensity for either co-optation or removal from power. However, although these movements had failed to bring change at that level, they had played a role, on the positive side, in developing a basis for more independent participation in society. The logical next step was to form a broader resistance movement that applied pressure from below.

What distinguished the Solidarity movement from past efforts to bring about reform was the joining together of forces within society that had previously been divided. The constructions of solidarity between intellectuals, workers and the Church was essential to any kind of underlying solidarity in confronting the regime.

For Solidarity dialogue was the central objective – even with those who had been a source of betrayal. One had to convince the adversary rather than coerce him or her. Solidarity knew that once a channel for dialogue with the government was open, the regime would inevitably fall. Authoritarian  regimes require a tight grip on power, and once it is loosened, it is only a matter of time until it collapses.

The Development of Polish Romanticism

The notion of Polish Romanticism was shaped by a long history of foreign intervention and violent attempts to resist it. According to the historian Norman Davies, Polish Romanticism was the idea of a “true” Poland consisting of Polish folklore, historical tradition and medieval legend, with a specially Polish notion of Catholic piety. It also had a political dimension, as it was a cult of freedom, stressing that Poland was an independent nation and culture.

Polish Romanticism grew out of centuries of living a double existence, which combined a minimal degree of political conformity, in order to stay out of prison, with secret Polishness. In post-World-War II Poland there was the coexistence of two types of talk, the one based on Marxism-Leninism, which had been imposed on Polish society, and the other which relied on memories of the Polish nation, Church and martyrdom. In this sense Solidarity’s campaign was, as political historian Karin Fierke put it, about “giving people back their memory,” such that an older, truer version of the Polish nation could come to the foreground.

Polish Romanticism acknowledged Catholicism as the yeast that had given rise to Poland’s distinctive national character, and the symbolism of martyrdom was central to this.  This married Polish Romanticism to non-violence as the only morally acceptable form of resistance.

The Catholic Church helped to define “true” Polishness. Jozef Tischner, a Catholic priest known as Solidarity’s chaplain and philosopher, had a huge impact on the development of the movement. His contention was that people were suffering from “spiritual pain” born out of a sense of social injustice and deep dissatisfaction with the way the state was governed. It is important to note that the philosophy of Tischner was not an abstract body of work; the central concepts of authenticity, truth-telling, fidelity, dialogue and sacrifice were part of the daily language of Solidarity activists.

The Visit of John Paul II

The visit of the Polish Pope John Paul II to Poland in 1979 is considered a turning point in the decommunization of the country. As a Polish Pope, John Paul II was not only a symbol of traditional Polish culture, but for the believers, he was also God’s representative on earth. His visit appeared to be an act of divine intervention intended to aid the Polish people in the fight for freedom.

At the time of the visit Poland was in a deep and permanent economic crisis, with widespread shortages of basic foodstuffs and progressive rationing. According to the papal expert Cezar Ornatowski, John Paul II’s visit to Poland provided the potential with “an impulse, a focus, a unifying symbol, and a language to articulate the accumulating disaffections and aspirations.”

The sermons were designed to have a political impact, according to the papal expert. The scriptural theme for the 1979 visit was the words of Christ, “Do not be afraid,” and the leitmotif was renewal. Through the use of Christ and past martyrs as symbols, the Pope clarified the sacrifices that would be necessary for non-violent protest.

The talk of the Pope shaped the context, or the structure of meaning within which Polish solidarity formulated its own actions and responses to the regime, with the organization’s emergence a year later. In 1989, a decade after the visit of John Paul II, a Solidarity-led coalition was governing Poland, and the renewed, liberated version of Poland envisioned by the Pope and Solidarity was made manifest.