Where Did The Term "The West" Originate? 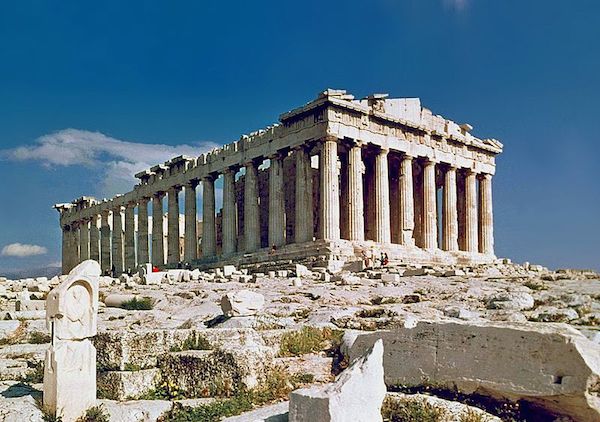 What is the geopolitical entity known as “The West”? Newspapers and historians use the term regularly, but what exactly does it mean, and is it truly a useful term?

A Google search for the term “The West” returns approximately 238 million hits. Indeed, there is no shortage of uses of the term, but when did it become popular? Finding the history behind the division of the world into “East” and “West” is not an easy task, as this particular division has been developing for centuries.

One of the first people to use the terms East and West was Herodotus, the father of history, in the fifth century BC. Fourteen centuries later the terms proved useful in describing the impact of the Great Schism in the Christian Church that culminated in the 11th century. In the centuries leading up to the schism, the Church began to experience disagreements within the hierarchy over several key ecclesiastical aspects, most notably papal authority. These disagreements, proving to be irreconcilable, led in 1054 to the division of the Church into the Western Catholic Church and the Eastern Orthodox Church. This division within what was arguably the most significant public institution of the time had lasting consequences.

Another pivotal development was the arrival of the Industrial Revolution, an event that occurred around roughly the same time as the wave of European imperialism that swept the world. Some historians argue that it was during this period that the East began to be distinguished from the West as "The Other." Jacob Whittaker, a visiting professor of history at Michigan State University, told HNN:

'The East' or ‘the Orient’ became the ‘other’ in reference to which ‘the West’ was defined, that portion of the world that was ‘civilized’ but had inherited a different set of ancient cultural influences. Around the time of the Industrial Revolution, Europeans and the societies in the Americas that were closely tied to Europe began to create a historical narrative of ‘the West’ that played up the progressive, evolutionary aspects of ‘Western Civilization’ and portrayed ‘the Orient’ as timeless, stagnant, and doomed to backwardness unless it could imitate ‘the West.’

In his book Orientalism, Edward Said explains that a concept of the East was central to the creation of a special Western identity:

The Orient is not only adjacent to Europe; it is also the place of Europe’s greatest and richest and oldest colonies, the source of its civilizations and languages, its cultural contestant, and one of its deepest and most recurring images of the Other. In addition, the Orient has helped to define Europe (or the West) as its contrasting image, idea, personality, experience.

Though defining the West in terms of the Orient began during the years of imperialism, the practice continues to this day.

The evolution of this notion of “the West” and its counterpart “the East” suggests that the terms carry enormous cultural baggage. Is it useful to continue using them as if they were neutral? Is the world we live in meaningfully divided between East and West in terms of religion, culture, politics and history? Some scholars, such as Samuel P. Huntington, believe that the dichotomy is too restrictive. Huntngton argues that the East and West are themsevles divided into a wide array of subcultures, or civilizations, and that clashes between these civilizations are inevitable: ”Civilization Identity will be increasingly important in the future, and the world will be shaped in large measure by the interactions among seven or eight major civilizations…The most important conflicts of the future will occur along the cultural fault lines separating these civilizations from one another.” According to Huntington, dividing the world into East and West ignores the complexities and nuances of the current geopolitical atmosphere; since it is individual civilizations that are now being pitted against one another, such broad geographical divisions are no longer useful.

Although he disagrees with the dismal future that Huntington suggests, Jacob Whittaker shares Huntington’s belief that a simple dichotomist view of the world is no longer useful in today’s global atmosphere:

In the last two or three decades, historians have begun questioning the received wisdom about ‘the East’ and ‘the West’ and the differences between the two…. The majority of scholars have begun to question the old stereotypes about ‘East’ and ‘West,’ although the stereotypes have by no means disappeared, and they continue to animate popular understandings of the world and populist politics throughout much of the globe (both East and West).

With the continuing integration of immigrants into Western societies, the notion of a world fundamentally split neatly in two is misleading. Historians today seem generally to agree that a simple distinction of “East” and “West” is neither useful nor desirable, but that does not mean that the distinction is going away any time soon.

From a Chinese point of view, China is the center of the world. So Europe is the West. But Japan is East: The Land of the Rising Sun.
The real question is why the Middle East is considered East. They are west of China, and are not "oriental" at all, but Semetic(Arabia, Iraq) or IndoEuropean (Iran) in language.

I would have loved to explore the vast background of this particular topic, but a brief article on the subject is a poor substitute for a research paper!

"This division within what was arguably the most significant public institution of the time had lasting consequences."

Perhaps I should have stated it more clearly, but that was my way of saying that the consequences continue to this day. Indeed, religion became (and remains) a huge player in the distinction between peoples, particularly today. For example, in the contemporary world, "Islam" has become associated with terrorism, a relationship that has been forged by western thought and for the most part has no basis in reality.

One would think the division of the Roman Empire would be a significant source of "East" and "West".

Of course I realize that religion is discussed in Mr. Haverly's piece, so my comments are directed toward the present. I am arguing that religion, noted in his third paragraph, is still very, very relevant.

It should be noted that 'West' and 'East' are also convenient shorthands for 'Christian' and 'non-Christian.' According to these users of the term 'West,' western values and assumptions carry a Judeo-Christian tone and those in the East do not. Those who espouse Christian values sometimes use the term 'West' - either unconsciously or consciously - to give their ethical statements a secular basis.