Mr. Walch is the director of the Herbert Hoover Presidential Library in West Branch, Iowa, and a writer for the History News Service. His book, Uncommon Americans: The Lives and Legacies of Herbert and Lou Henry Hoover, was published in 2003. 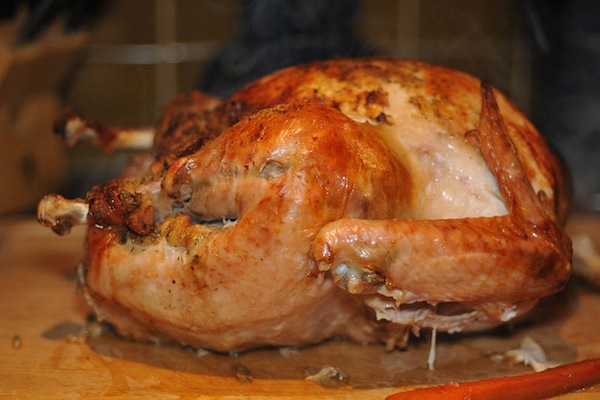 Thanksgiving dinner: never has the history of a meal been so obscured by myth. Every year on the fourth Thursday in November, Americans sit down to eat with family and friends. Some gather to give thanks for all that they have received over the previous year; others get together just to enjoy turkey and football. We all celebrate Thanksgiving in our own ways.

So what do most Americans believe happened on that first Thanksgiving Day? Most still cling to what they learned in elementary school. The Pilgrims sat down with Indians for a big meal of turkey, cornbread, cranberries and pumpkin pie. The Pilgrims dressed in black, and the Indians wore feathers and colorful beads. In fact, many Americans today still recall if they were "pilgrims" or "Indians" in their school pageants.

It's a charming story, but it's a myth. To be sure, it's a powerful one -- one that will be repeated many times this November. The fact that it's so pervasive is evidence that American myths have long lives.

So what are the facts of that first Thanksgiving? In fact, the Pilgrims of the Plymouth Colony in today's Massachusetts did share a meal with the Wampanoag Indians in the autumn of 1621, but the rest of the details are uncertain. The only documentary evidence of the event comes from the journal of Plymouth Colony's governor, Edward Winslow, who noted simply that the colonists met with Chief Massasoit and 90 of his men for a feast that lasted four days. No one worried about cholesterol or obesity in 1621!

Though they don't have much evidence, historians and archaeologists do have an educated hypothesis of what the Pilgrims ate, how they ate, when they ate and what they wore at that first Thanksgiving meal. The historical facts are not at all like the scene usually painted in elementary school.

Start with the menu. It's not likely that the Pilgrims and the Indians consumed any bread dressing, mashed potatoes or pumpkin pie. In fact, it is not likely that they ate any roast turkey either. The only items listed in Winslow's journal were "venison and wild fowl," and it is likely that dried corn and fruit filled out the bill of fare. In colonial times, a person ate what was available, when it was available. No one back then saved room for pumpkin pie.

Another myth has to do with how the meal was served. The Pilgrims and the Indians did not, as the myth has it, sit down at tables, bless their food or pass the serving dishes. It's more likely that food was set out on every available flat surface: tables, boxes, benches, and tree stumps. The meal was consumed without ceremony over three days, whenever someone was hungry.

No one used plates or eating utensils. Although both the colonists and the Indians occasionally used cloths or napkins if the food was hot, they usually ate with their hands. And not everyone ate everything that was served. Most diners ate what they liked or whatever dish was closest to them.

Finally, it's important to dispel one last Thanksgiving myth -- that the Pilgrims dressed in black and white clothing, wore pointed hats and starched bonnets and favored buckles on their shoes. It's true that they dressed in black on Sundays; but on most days, including the first Thanksgiving, they dressed in white, beige, black, green and brown. And it's likely that the Indians were fully clothed to ward off the chill of autumn in New England. Who would wear only a loincloth in Massachusetts in November?

So it's a good thing that Americans today are not tested on the history of that first Thanksgiving, because few of us would earn a passing grade. It seems that the historical evidence of Thanksgiving is not as compelling as the myths that cloud our memories. It's too bad that childhood images of Pilgrims and Indians aren't based on historical facts.

And yet there's a legacy about this holiday that threads its way from past to the present and defies both myth and historical evidence. That legacy is generosity. To be sure, Americans today may not be as religious as the Pilgrims, but most Americans do share their plenty with their family and friends on this special day. It's a holiday that brings all Americans, no matter their creed or disposition, together. And that's something worthy of our thanks.

This piece was distributed for non-exclusive use by the History News Service, an informal syndicate of professional historians who seek to improve the public's understanding of current events by setting these events in their historical contexts. The article may be republished as long as both the author and the History News Service are clearly credited.

From the falling down leaves, I could smell the turkey and pumpkin pie. With the colder and colder wind, Thanksgiving Day is getting closer and closer. I, sometimes, just wonder the way how our ancient celebrated the Thanksgiving Day. They might have no balloon, no rubber wristband or any modern equipment. They might have only band, dancing, games and traditional food. In our eyes, their life was too simple to give thanks. They could only survive from starvation, disease and other God action; they survived so they delivered their thanks to God, which in my opinion should be delivered to the Indians, without whom our ancients could have no possibility to survive.
Look back over our history, I think may be America is the country which on the list of having no idea how to deliver thanks countries. Though every year when Thanksgiving Day is coming, our teacher, our parents or even the old people in our suburb would ask us to think out or even to write down who or what we would like to give our thanks. And every time this task becomes a headache task for us, we do not know what to say, so we just write down that we would like to thank the weather, the rain, the snow for they give us something fun. Or we would like to thank our grandparents for they gave us chocolate to eat. We have no idea of whom or what do really help us. Just like what our ancient did before. They survived because of the Indian’s help, but they deliver their thanks to God (of course part of the thanksgiving party was held for Indian), then later they turn their gunshot to Indian, who saved them before and was their friends.
Maybe Thanksgiving Day should not only bring us the memory of turkey or pumpkin pie, but also should ask us to think.

This is bull crap

i really dint know what the foods looked like or what they are so gould you clue me in ???? Please????

thankyou very much
Callie
P.S. if at all possible could you please send in some pictures please.

I learned in college that Thanksgiving Day is actually a day of mourning. If it is, who and what did they mourn about? What event occurred to cause the people to mourn?

I doubt that Massasoit and 90 "men" came to eat. I believe it would have been quite strange for there to be no women and children along.

Interestingly, our family visited the Plimouth restoration last year on a bitterly cold day in November. The Indian men were indeed out in little more than loin cloths. One Indian lady who was demonstrating sewing did have a fur wrap over her shoulders, but the men working on a canoe had bare arms and chests. They claimed not to be cold and expressed surprise that those of us visiting were dressed so warmly. The temperature that day was in the 30s and it was quite windy. I would have described the day as "bitter".