Yoav Di-Capua is an Associate Professor of Arab Intellectual History at the University of Texas at Austin and the author of Gatekeepers of the Arab Past: Historians and History Writing in Twentieth Century Egypt. 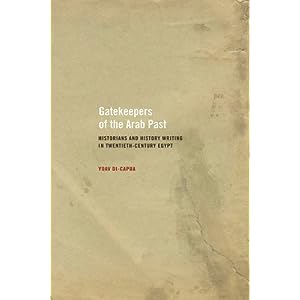 When asked this week what meaning could be derived from the revolutionary events in Egypt, `Abd al-Bari `Atwan, the outspoken editor of the international Arab newspaper al-Quds al-Arabi, did not pause long in his answer:  “Finally,” he said, “we have a new Arab project.  Everyone else in the Middle East has one.  The Iranians, the Turks, the Israelis and even the Americans.  The democratic call from Cairo’s Tahrir Square is our new project.”  The search for a so-called new Arab project, or Mashru`, has a long history.  There were other times, during the 1950s and 1960s, when Arab peoples felt that they were shaping their own destiny.  They defied the British and successfully nationalized the Suez Canal, they liberated Algeria from French rule and they were at the forefront of Third-Worldism and decolonization.  Their project was no less than the making of a new Arab man and woman:  liberated, proud, self-sufficient and, overall, modern.  Under the revolutionary banner of Nasserism expectations ran high, perhaps too high, for it was not to last.  Their abrupt defeat by Israel in June 1967 sent the Arabs to the depths of collective depression and disorientation, one of many subsequent experiences that would eventually give birth to religiosity, fundamentalism, public passivity and, ultimately, global terrorism.  Slowly but surely, the Arab world became increasingly more divided, more authoritarian and less independent.  The first 1991 Gulf War, during which Arab armies fought alongside the U.S. against Iraq, a fellow Arab nation, registered in the region as another major setback.  Since then, Arabs have experienced more defeats and disappointments, perhaps most prominently on the Palestinian-Israeli front.  It is no surprise, then, that one of the most commonly used Arabic words to describe this recent Arab history is a period of azma, or crisis.  One can find the term on hundreds of book covers and in printed and digital media on a daily basis.  In recent years, especially in Egypt, the old days of collective optimism appeared as only a distant memory—and the nearly thirty years between 1923 and 1952, when Egypt led the region culturally, intellectually, and politically as the largest and most vibrant Arab democracy, seemed to be forgotten.  That is, until now.

Though the call for civic revolt came from Tunisia, the political future of the Arab state will be decided in Egypt.  Especially now, when Iraq, its traditional rival for regional hegemony, is struggling to survive as a united political community, the role of Egypt will be critical.  But which Egypt is to emerge from the upheavals of the last three weeks?  Which political traditions can serve its fragmented opposition as it goes about unmaking a dictatorial system?  Will the Muslim Brotherhood play democratically?  Are we to expect a counter-revolution from regime supporters in the vast security apparatus?

As in all revolutionary moments, much is up in the air.  After eighteen arduous and exhilarating days of demonstrations, it took Vice President Omar Suleiman exactly twenty seconds to broadcast a makeshift televised message announcing the departure of Mubarak.  The fall of a dictator is ever swift and inglorious.  However, the fact that Mubarak is now gone does not mean that his regime’s powerful patronage network, in which the army represents the largest economic sector in the country, is to dissolve itself voluntarily.  The structure of oppression is still there, legally, economically, politically—and in people’s heads.  Hundreds of thousands of well-off Egyptians serve this structure and benefit from it.  This state-made middle class is loyal and has much to lose.  Many of its members are in the army, police and various security agencies.  As one such middle-class citizen opined in an interview last week:  “Why should I give up my country to a bunch of people who met on Facebook?”

The opposition of course did not simply “meet on the web,” though it unquestionably made the best possible use of it.  At least since 2004, an informal coalition of labor unions, human rights organizations, the 2006 April 6th workers’ solidarity movement, The Egyptian Movement for Change (Kifaya), al-Ghad Party, the Muslim Brotherhood, as well as other organizations and web-based support groups, have been working persistently to expand the civic distance between the regime and the people.  They were quite successful in bringing to life a forgotten democratic political culture, but they were not prepared for a revolution, nor did they prepare for the day after.  Consequently, there is no common agenda and no clear sense of what Egyptian democracy will eventually look like.

Especially vague is the position of the Muslim Brotherhood.  This vagueness is not the result of some calculated insidious strategy but due to the fact that under the pressures of the Mubarak regime it functioned primarily as a vast charity network.  For fear of repression, open conversation on the desired nature of government did not really take place and the rank-and-file of the Muslim Brotherhood is sharply divided on this issue.  While some would settle on the “Turkish model”, others point to no less an example than Saudi Arabia.  If the Brotherhood is to function democratically, it has a lot of grass-roots ideological work ahead.  The current constitution prohibits religiously-based parties from running in elections.  This anti-Brotherhood article will be at the center of post-Mubarak negotiations on the relationship between state and religion.  This is likely to be the most challenging aspect of the transition, and one which is of immense importance to the rest of the region.

Finally, Egyptians are now left with the army.  The last time the army got involved in politics, in July 1952, it failed to return to the barracks as promised.  It took the painful `67 war and a major national crisis before the army was properly de-politicized.  Many left-wing Egyptians say that if they could, they would stay in TahrirSquare until the army handed power to a democratically-elected government.  Thus far, the army has successfully presented itself as an impartial institution.  This game is now over.  In the following months it will need to negotiate a new power structure with the opposition and draft a new, or at the very least a heavily revised, constitution.  The heads of the military will likely do their outmost to salvage whatever they can from the structures of the previous regime.  After all, how flexible can a military be when it owns construction companies, bottled water factories, hotel chains, and is, in fact, a major benefactor of Mubarak’s kleptocracy?  Will they cut part of their own flesh for the sake of democracy?  Will they support corruption investigations once they will reach into their own ranks?  As the celebrations begin to subside, ordinary Egyptians will start pressing for answers.  If the army’s response will be candid and forthcoming, `Abd al-Bari `Atwan’s hopeful aspirations for a new democratic Arab project will indeed be vindicated.

There is a saying that everything new is a well-forgotten old. This saying may serve as a perfect resume on what has just transpired in Egypt: the old government is gone, but the its main enabler and supporter - the military - took charge. There is a fat chance the new, claiming to be temporary, rulers will give up their overwhelming political and economic power in favor of the ones whom it actually and naturally belongs: the majority of Egyptian population.
That chance additionally and severely minimized further by the Egyptian military high-rank officers' close affiliation with and subordination to the American imperial governments, and US corporate capital who abhor and, therefore, invariably deter democracies in the Middle East and elsewhere, by installing or/and strongly supporting anti-democratic, autocratic, plutocratic, oligarchic, or/and dictatorial regimes.
Thus, the future of Egyptian society
is much bleaker than majority of Western and pro-Western "pundits" picture.