Daniel S. Margolies is Professor of History at Virginia Wesleyan College and the author of Spaces of Law in American Foreign Relations: Extradition and Extraterritoriality in the Borderlands and Beyond, 1877-1898 (University of Georgia Press, 2011). 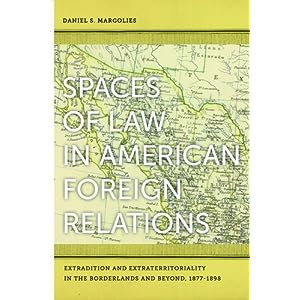 Now that the initial street celebrations and media frenzy have dissipated with the passage of a couple of days after the killing of Osama bin Laden, politicians, historians, legal scholars, and even a few talking heads have begun asking new questions about aspects of the raid, particularly regarding its legality under U.S. and international law and its meaning within the context of American foreign policymaking.  Putting aside profound questions of politics and justice in the decade-long pursuit of Bin Laden, and sidestepping thorny diplomatic quandaries raised by the news that Osama bin Laden has been hiding in plain sight down the street from the Pakistani military academy, we must still ask some critical questions such as:  just what was up with the use of “Geronimo” as the name for the whole SEAL operation?

This choice of the seeming incongruous “Geronimo” should not be seen as a mistake, especially in the legally astute, historically informed, and media savvy precincts of the Obama administration.  How much of this raid could possibly have been left to chance, starting with its name?  Labels might seem irrelevant, but military code words and project names have long larded operations with intimations of great (or pseudo-) portent.  We have been served up gassy names such as Bush’s “Operation Iraqi Freedom” rebadged into the flabby marketing of “Operation New Dawn” for the reinvented Obama war in Iraq.  We can continue to scratch our heads over “Operation Odyssey Dawn” for the war in Libya.  But “Geronimo” was clearly a deliberate choice saturated with historical meaning related to the extraterritorial pursuit of bin Laden.  It may even have been a deft joke.

Geronimo is familiar to most as a renegade Chiricahua Apache fighter in the 1880s, and as the cry of World War II paratroopers jumping out of planes.  The final capture and exile of Geronimo occurred as a result of an extraterritorial U.S. military operation in Mexico in September 1886.  It was not an anomalous event, but rather one of a long series of extraterritorial acts employed by the United States as it built a flexible foreign policy upon unilateralism and the invocation of sovereign exception to established legal structures.  The ease with which the United States found it could step outside of both borders and the law in times of declared emergency, such as in the case of volitional cross-border incursions into Mexico in pursuit of Geronimo and others, clearly marked the centrality of power via the sovereign exception (a la Giorgio Agamben) as a dominant feature of American foreign policy.

Broad and unilateralist assertions of global jurisdictional authority, including trans-border armed incursion and extraterritorial abduction and assassination, had their clear policy utilities firmly established in the 1870s and 1880s.  This has been a little-studied period of foreign relations, and became obscured long before the new American empire of the twentieth and twenty-first centuries required the production of newly formalized schemes of ideological justification.  The ongoing emergency of the “War on Terror” has simply provided access to ever-blossoming arrays of new exceptions and highlighted the advantages of loose legality and extraterritorial latitude in foreign policy.

Calling the raid “Geronimo” and linking Bin Laden to a legendary fugitive might just be seen as a careless bit of historical and popular culture reference if it did not so fully invoke this well-trod route to exception.  In this way it was not an anachronistic usage.  The extraterritorial killing of bin Laden stands firmly in line with the projection of U.S. power against non-state actors beyond borders extant since the late nineteenth century.  Additionally, the centrality of unilateralism in policy at the time, a key attribute of the sovereign exception, strongly undercuts arguments that contemporary U.S. imperial foreign relations in the Bush-Obama era can be cast as sharp ruptures with past practice.

Extraterritoriality is the claim of jurisdictional authority outside of one’s own sovereign jurisdiction, either into another sovereign jurisdiction such as a nation like Pakistan, or into an indistinctly sovereign area.  This latter category is where the United States used to place the borderlands with Mexico (and does again today in creeping ways, as it deploys Predator drones across the border) as well as the borderlands of Afghanistan and Pakistan.  Extraterritorial claims were generally justified on the basis of both necessity and expedience in states deemed to be either “uncivilized or semi-civilized” or in “other places where Pagan and Mohammedan law prevail[ed],” as the official opinions of the Attorney-General presented it in 1890.  The claims reflected the ways policymakers divided the world into civilized zones of sovereign power and uncivilized zones where extraterritorial exception was readily accessed.

As president, Obama has made fewer claims of extraterritorial jurisdictional authority in capturing, abducting, or holding suspected terrorists than did George W. Bush.  This is as much or more because of the difficulties of detention and trial (not to mention torture) than any real policy difference.  Indeed, Obama has vastly expanded the projection of extraterritorial military force through extraterritorial killing via predator drone, and now through Special Forces in Pakistan.

This new era of robust extraterritorial interdiction, abduction, and assassination can be viewed in many ways as reminiscent of the period between the 1870s and the 1890s.  Republican President Rutherford B. Hayes authorized U.S. troops for at-will extraterritorial incursions into Mexico, culminating in the infamous Ord Order of 1877.  Later, Democratic President Grover Cleveland authorized the similar incursions on a smaller scale and under reciprocity arrangements in pursuit of Geronimo and others.  The same year of Geronimo’s capture, in the astonishing case of Ker v. Illinois, the U.S. Supreme Court ruled that extraterritorial abduction was perfectly legal under the U.S. Constitution.  Rather than being repudiated as the mistake of a bygone era, this decision has been reaffirmed and expanded ever since.

Connecting the “the killing or capture of bin Laden the top priority of our war against Al-Qaeda,” as President Obama called it in his speech last week, to the extraterritorial hunt for Geronimo thus deliberately invokes America’s uniquely expansive and unilateralist sense of jurisdiction over transnational concerns perfected in the late nineteenth century and remorselessly pursued since.  During the 1870s and 1890s, U.S. foreign policy utilized elastic approaches to issues of extraterritorial jurisdiction as part of a long-term and focused drive toward establishing dominion beyond its borders through empire.  This was a period of time that has been overlooked by historians and other scholars of foreign relations despite its significance as the era when innovations of extraterritorial governance and intervention were developed and implemented.  Formal imperial structures root well in the soil prepared by extraterritorial claims and acts.  Though many historians and political scientists decried imperial unilateralism in U.S. foreign affairs since 2001 as a departure from both American precedent and ideals, the historical record shows that both Bush and now Obama run in the well oiled paths of extraterritorial action and sovereign exception employed by presidents of both parties more than a century ago.