What Would the Founders Do About Terrorism?

Mr. Brookhiser is the author of Rules of Civility, Founding Father, The Way of the WASP, Alexander Hamilton, and The Adamses. He was the curator of the Hamilton exhibit at the New-York Historical Society. His latest book is What Would the Founders Do?, from which this article is drawn.

Eighteenth century warfare was supposed to be a civilized affair, with elaborate rules for how prisoners should be treated, exchanged or paroled. When the British lost the battle of Saratoga in 1778, the American commander, Gen. Horatio Gates, signed a convention allowing Gen. John Burgoyne and his men to go home, so long as they promised not to return to fight again in America. The terms caused some grumbling, since -- the homecoming enemy would free up other troops to replace them. But before Burgoyne could sail away, he unwisely complained of the temporary accommodations the Americans gave him, which allowed them to claim that he had rejected the convention, and to hold his men prisoner. 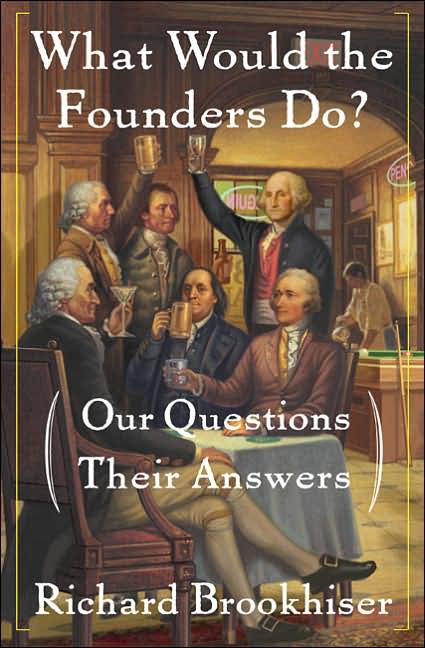 Such were the rules, and often the practice. But war shaded into terror, especially when it was fought in remote or chaotic areas. Frontier warfare, involving Indian allies and enemies, was brutal on both sides. Joseph Brant, a/k/a Thayendanegea, was a Mohawk chief who led murderous raids on patriot farmers in New York and Pennsylvania, killing women and children as well as soldiers. Brant was no savage-he was a devout Episcopalian who helped translate the Gospel of Mark into Mohawk--he simply behaved savagely in wartime. George Washington responded by sending Gen. John Sullivan to destroy the Indians' towns, crops and"everything that was to be found." Sullivan, who had the help of friendly Oneidas, laid forty villages to waste; Brant's raids only redoubled.

In the south, guerilla warfare raged between patriots and loyalists. Gen. Nathanael Greene, sent to retrieve the military situation in the Carolinas in 1781, wrote in shock to his wife Caty about what he found there."The sufferings and distress of the inhabitants beggars [sic] all description. ... they persecute each other with little less than savage fury." Recently, the historian David Hackett Fischer has popularized an ethnic theory of southern exceptionalism to explain such conduct: southerners fight ferociously because they always have, back to their pre-immigration days in Ulster and the Scotch-English border. There is something to this, but the American Revolution became vicious wherever neither side clearly controlled territory, and fighting fell by default to bands of irregulars. Westchester County, north of British-occupied New York, was another such no-man's land; there the marauders were called cowboys.

Early in the war, Gen. Charles Lee, a radical, eccentric English officer who had settled in Virginia and taken up the American cause, envisioned a guerilla struggle, involving punitive measures against American loyalists. Native-born officers like Washington and Greene preferred to rely on a professional army, responsible to the politicians in Congress. No doubt they were motivated, in part, by pride: they wanted to show the enemy, their former rulers, that they were not rubes leading some rag-tag uprising. But they also dreaded the civil commotion that Lee evidently welcomed.

Washington and Greene were right. John Adams guessed that a third of the American people supported the Revolution, a third opposed it, and a third were indifferent. The key factor in shifting those numbers as the war progressed was the brutal conduct of pro-British irregulars. Since the British army controlled less territory, they were more reliant on such help. The Americans didn't always do right, but they did right more often than their enemies, and it did them a lot of good.

From the book What Would the Founders Do? by Richard Brookhiser. Copyright © 2006. Reprinted by arrangement with Basic Books, a member of the Perseus Books Group (www.perseusbooks.com). All rights reserved.

I agree. The problem used to be much worse. This example shows that it has not been completely overcome.

The title and its question is 'What Would the Founders Do About Terrorism?' but, this essay neither addressed nor answered this question at all.

Let's see who's first to post a rebuttal centered on Jefferson's Barbary War.

The founders actually had to deal with this issue - but not as a first rate power but as a second rate power being sucked into European power politics. In particular, the case of Citizen Genet stands as a very illustrative example of just how Banana Republicesque the early years of the American Republic actually were.

Washington attempted to forge a unity government, best represented by the opposed pillars of Hamilton and Jefferson. As Washington drifted more and more towards Hamilton, Jefferson's internal dissent took on aspects that coould reasonably be labeled treasonous.

Initially, Jefferson and his allies feted Citizen Gent, who had come to America seeking support for France against counter-revolutionary Britain. The Jeffersonians labeled Hamilton and the emerging Federalist as pro-British counter-revolutionaries. This was largely demagoguery. In fact, Hamilton's program, which Jefferson insisted was a subversion of democracy and the reovlution, was designed first and foremost to make it possible for the US to borrow money in the event of a war with Britain. If British merchants and manufacturers helped fund thhe American debt, then they would become reliable allies of America - as many of them were during the war for Independence itself!

Citizen Genet and those who feted him within the ranks of the Jeffersonians, would have none of this. Citizen Genet "toured" America with the overt intent of soliciting American volunteers to attack British targets on American soil. His wish was to sever the relationship between America and England for the good of Revolutionary France...which was soon to become the epicenter of state sponsored terrorism. The Jeffersonians eventually distanced themselves from Genet and actually denounced him as he became too provocative and the reality of the consequences of a war with Britain began dwarfing their imagined fears of a Hamiltonian aristocracy. But it is fair to say, that the antics of Citizen Genet indicate that he was emboldened enough to attempt to draw the US into conflict with Britain. Further, it was from within the Washington adminstration itself, namely fromm Jefferson, that overall support for France came. Additionally, the heated rhetoric about Hamilton and the Federalists being pawns in an immanent British take over (from the North in Canada, the West and, of course, the Atlantic) certainly gave the likes of Genet the impression that America's loathing of British equalled that of Revolutionary France. When the chips were down, however, Jefferson knew better and Genet was hung out to dry - not necessairly a tragic result, but it still speaks ill of his American allies. Except those who joined him on a lark.

That's an easy one. The Founders first tried to pay off the Sea Ghazis of the Barbary coast, then the Founders established a navy, then they cut our first "arms for hostages" agreement and began the arms trade to the Middle East, then they sent the new navy to the Med and tried to protect our ships, then they blockaded Tripoli, then they bombarded Tripoli, and then President Thomas Jefferson undertook a paramilitary operation to effect "regime change." We've been there ever since (except for short periods when we were otherwise engaged). And, believe it or not, neither Israel nor petroleum had anything to do with any of this.

Although I do not know if this is the case here, one of the occasional problems with HNN is that the titles are often not chosen by the author. Sometimes the results of this are unfair to both author and reader.