The Price Civilians Pay for Liberation


by William I. Hitchcock

Mr. Hitchcock is the author of The Bitter Road to Freedom: A new History of the Liberation of Europe (New York: The Free Press, 2008). He teaches at Temple University. 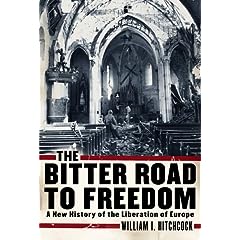 Do civilian casualties matter in a just war? The terrible toll of civilian lives in Afghanistan caused by allied air and missile strikes and ground operations against the Taliban poses this question on a regular basis. Earlier this month, on January 7, American commandos conducted a nighttime raid that according to military officials killed 32 Taliban insurgents. Afghans say the dead were civilians. These disputes between US and Afghan accounts are common, and usually embarrassing for the Americans: in October, a special US Air Force investigation confirmed that at least 30 civilians died in a US missile strike on a reputed Taliban stronghold in the western Afghan village of Azizabad on August 22.

There is no doubt that our war in Afghanistan has taken an awful harvest of innocent lives. The United Nations reports that in the past year, over 2,000 Afghan civilians have died in the fighting against the Taliban. The issue has prompted harsh words from Afghan president Hamid Karzai and made it harder to win hearts and minds in his troubled nation. The liberators, it seems, are wearing out their welcome.

We have been here before. Even in just wars, injustices are done. In World War II, a war that all Americans agree was a righteous one, Allied bombing killed many civilians in the very lands that America aimed to liberate. On June 6, 1944, for example – D-Day, a moment immortalized in countless films and books as a glorious day for Americans – US and British aircraft pummeled the French coastline in Normandy, killing about 3,000 French civilians. This would turn out to be roughly the same number of allied servicemen who died that day.

And this was only the beginning. During the summer of 1944, as German and allied soldiers ground Normandy into a bloody mess, over 19,000 French citizens died in the crossfire. Most of these were killed by Allied airpower, which dominated the skies over France. In Caen, where British troops fought a fierce two-month long campaign against entrenched German positions, repeated allied air strikes completely destroyed the city. At the end of the battle, 2,000 of the city’s residents lay dead beneath the rubble. Nearby, the lovely cathedral town of Lisieux was also flattened in the fighting, and over 700 of its citizens killed. No town or village in Normandy was spared these punishing blows. During World War II, about 70,000 French civilians were killed as a result of allied bombing in France.

It is easy to expand this grisly catalogue, from Italy through northern France and Belgium, to say nothing of Germany itself, where allied bombing laid waste to virtually all the major cities, taking over half a million lives. In the great war against Nazi tyranny, American strategists accepted that civilians would be killed. Their technology allowed no such thing as precision air strikes. They possessed only a blunt instrument – saturation bombing – and they used it to devastating effect.

Yet a remarkable thing happened in Europe. Despite the catastrophic losses endured by liberated civilians, and despite a period of torment and bitterness directed at the allies for the destruction they wrought, Europeans soon forgave their liberators. Indeed, every year since the war, grateful French, Belgian, Dutch and Italian people duly celebrate their liberation in ceremonies large and small. American, British and Canadian veterans are welcomed back to Europe, military bands strike up the old tunes of wartime solidarity, and a strong European-American friendship is renewed. How did such gratitude and forgiveness emerge after such appalling civilian casualties?

The answer lies, first, in victory: the total defeat of the hated Nazi regime allowed Europeans who had lost family members in allied air attacks to legitimize their sacrifices. The deaths had been awful, they reasoned, but their loved ones had died in the cause of freedom. And this victory was swift: it took the allied forces only 337 days after D-Day to force a complete German surrender. This meant that each day, Europeans who had suffered so much under Nazi rule could see progress. They could chart the powerful advances of the great allied armies toward Hitler’s lair in Berlin. The promise of victory soothed the anguish of personal loss.

Second, allied liberators rapidly delegated political control to local civilian administrators. Within hours of the landings on Omaha beach, allied military personnel had set up shop in the Norman city of Bayeux, where they worked side by side with Free French political officials. The same pattern held in liberated Belgium and Holland. Allied soldiers had come to defeat the Germans, not to replace them as occupiers.

Finally, America and Britain flooded liberated Europe with humanitarian aid. Within months of the liberation, millions of dollars of scarce food, medicine, clothing, and basic supplies arrived in European ports, to be distributed by an army of civilian aid workers. A new international relief agency, the United Nations Relief and Rehabilitation Administration, headed up a global aid program, and thousands of ordinary Americans joined the effort, working in European refugee camps and shattered cities. Every day, across the charred landscape of liberated Europe, American volunteers, serving in the Red Cross, the American Jewish Joint Distribution Committee, the Catholic Relief Services and hundreds of similar organizations, doled out soup, blankets, clothing and shoes to the millions of European war victims. With such an outpouring of material aid, the bitterness Americans had provoked during months of saturation bombing slowly ebbed away, to be replaced by fraternity and friendship.

How far we seem to be from this outcome today in Iraq and Afghanistan. After seven years of war, the goal of total victory remains elusive. We have stayed too long in these liberated nations and kept too much power in our own hands. We have not done enough to bind up the wounds that our own massive firepower helped to inflict. And because of these failures, we have nothing with which to salve the wounds of the families whose loved ones have died along the way.

We know from past experience that in wars of liberation, civilians are forced to pay a terrible price for their freedom. We also know that civilians will bear this burden if their liberators deliver swift and complete victory, and offer a generous helping hand once the fighting is done. Without these, the dreadful losses that liberated Afghans and Iraqis are suffering will quickly overwhelm the story we want to tell: that we are the good guys.  With every year that passes, and with every civilian death, that story becomes harder and harder for liberated peoples to believe.

There is nothing misleading about this article. The subject happens to be civilian deaths caused by liberators. Are the Taliban liberators?

The misleading implication of this article is that the deaths are all caused by US/NATO actions and bombings. The UN report itself states that while the Taliban is responsible for more civilian deaths than NATO, the actions of international forces and allies have sparked the most intense criticism from Afghans. So most of those killed have been killed by the Taliban, not by US/NATO forces.

The US has also questioned whether all those claimed to be civilians really are. The Taliban's incentive is to define every death as that of an innocent civilian.

I, too, decry the death of civilians in warfare. The difference seems to be that while the US makes efforts to minimize civilian death, the Taliban seeks to actually kill civilians. The two actions cannot be compared as equal.

WAKE UP MY FELLOW AMERICANS

The use of the Internet is not going to save our nation. Just because we can air our wishes and desires to bring coalitions together to discuss between ourselves the needs of others and us is far from a FIX for our GOVERNMENT.

The Internet is not the fix it is just one step along the way to bring saneness back as a core of thought between us.

But WAKE UP WE HAVE NO POWER for our thoughts and desires to be pushed along inside of our corrupt affairs of our GOVERNMENT.

Petitions and Pleas and all our blogging trying to tell each of our stories best as we can will never bring the kind of POWER to bring about the needed changes.

The bill being discussed has had the LOBBYIST in Washington DC in a feeding frenzy adding the things that their clients WANT ADDED to the bill and some call that PORK.

I call it GREED. The give and take and chit chat and back slaps and ballyhoo are just a repulsion to me how about you?

We have the number of folks to start our own LOBBY in Washington DC. When done we would have power to affect the changes needed to bring a halt to our run a way GOVERNMENT for a time.

Our LOBBY would represent us. They would snoop too to give all of us the day by day LOW DOWN what and who were pushing for what to be added to a bill to get a FREE RIDE in our DEMOCRACY.

Our LOBBY would be seen on CSPAN each night for the nightly NEWS not VIEWS from the elites and EAST COAST BLUE BLOODS needs to have their agendas pushed down our throats.

WAKE UP MY FELLOW AMERICANS

Contact for dbaker007@stx.rr.com on how you can help push the concept of
WE THE PEOPLES LOBBY along.