On October 19, 2012, according to a release by the National Association of Rail Passengers (NARP), "federal, state, and local leaders gathered ... in Illinois to celebrate the start of 110-mph rail service along the Chicago to St. Louis rail corridor."

A train averaging 110-mph over the 274 miles from Chicago to St. Louis would take 2½ hours. Flying takes just an hour, but that does not include the hour travelers must add for screening and flight check-in. As well, Amtrak travels city center to city center. For the business traveler or the tourist, Chicago offers much more within a few blocks of Union Station than Elk Grove Village does within a few blocks of O'Hare. So the higher-speed rail trip might generate considerable ridership. At present, "Lincoln Service" trundles along at 51 miles per hour, requiring 5 hours and 25 minutes for the journey.

Amtrak's celebration was happy. NARP called the event "a momentous step forward in the development of a modern and efficient Midwestern high speed rail network." Governor Quinn waxed, "A twenty-first century rail system in Illinois will create jobs and drive economic development throughout the Midwest, while making travel across Illinois faster, safer, and more reliable." He went on, "these long-term investments in our transportation system will benefit the citizens of our state for generations to come."

However, it was premature. All it meant was, an Amtrak train ran at 110-mph over one 15 mile stretch between Dwight and Pontiac. "The train ate up the 15 mile stretch of track in a mere 6 minutes," NARP exulted. Still, it was only 15 miles. No one has yet figured out how to move trains rapidly from downtown Chicago through its suburbs, within Springfield, or from Alton across the Mississippi River into downtown St. Louis.

As well, 110 mph is not very fast. In my earlier piece, I wrote of traveling faster than that across Illinois on the "City of New Orleans" in 1965, before Amtrak was born. Moreover, if Republicans win the presidency and Congress, even these modest goals will never be realized. Mitt Romney has not disclosed how he will save the trillions of dollars he has promised, but Amtrak's subsidy of about $1.5 billion (including almost a billion in capital expenditures) is unpopular with Congressional Republicans. 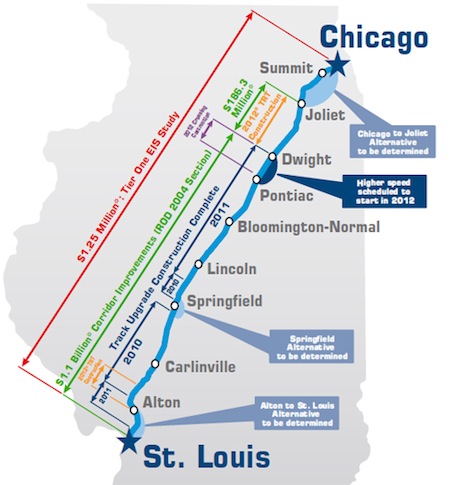 This map, showing what has been accomplished and what remains to be done, makes clear that higher-speed rail is a major attainment.

Surely the hardest challenge Amtrak faces is how to get Americans to think of it. Several years ago, I was eating lunch in a bar/restaurant in O'Hare en route to a speaking engagement in Nebraska. I was well aware of the Nebraska-Missouri football game scheduled for that evening in St. Louis, because people hosting me in Nebraska worried that no one would come to my talk, since the game was on TV. The intensity of the Nebraska-Missouri football rivalry is, shall we say, unrivaled. O'Hare had clear skies; so did Nebraska; I looked forward to a trouble-free connection. Next to me at the bar, however, was a thirty-year-old man with less happy prospects. He had been there for hours, downing beer after beer, because he could not get to St. Louis. Alone in the nation, St. Louis had been hit by a snow squall -- no planes in or out. My barmate had a date with three college friends to meet at the Nebraska-Missouri game. Now he could not make it. He was drowning his sorrow.

Since he had been at O'Hare for two hours and the game wasn't until evening, I asked him, "Why didn't you just take the train?" Obviously the thought had never occurred to him. "Where would I get it?" he asked. "At the train station," I said. "Oh yeah," he replied, wonderingly. But the concept was still completely beyond his ken. I flew off to Nebraska, leaving him nursing yet another beer and making plans to fly back home.

I provoke the same reaction when suggesting to acquaintances that they use Amtrak's overnight trains to travel from Washington, D.C., my home town. They've taken overnight trains in Europe but never considered them here. That trains might even be time-effective never occurred to them either. A traveler can leave D.C. after a full work day at 6:30 pm and be in Atlanta at 8:15 am the next morning. Moreover, that's after a shower and a full breakfast. The same economies hold for engagements in Chicago, South Carolina, or northern Florida.

Given this state of awareness, I suppose it's OK for Amtrak to celebrate a 6 minute higher-speed ride, if it makes folks more aware of trains. By the way, did you notice that the ride did not take 6 minutes? At 110 mph, 15 miles takes 8 minutes. But we can allow Amtrak a modest exaggeration, can we not? Considering the difficult tracks they face?