Of course, tomorrow never comes, at least not to my book pile. Time does march on, however, and soon it's too late to blurb them anyway.

How do "real" blurbers and reviewers keep up? Well, some cheat. They blurb books they have not read, not even skimmed, only looked at. Or, as we used to say in grad school, discussing a source glibly, "I haven't read it personally, but ...," and we proceeded to invoke or dismiss it, hopefully to good effect. (This is called "socialization into the profession.")

I cannot bring myself to blurb a book I haven't read, so I hardly ever blurb anything. But my heart is in the right place. I try to read what authors and publishers send me. I just fall behind.

Here follow my reviewlets of three different books that I meant to review, or at least blurb — honest, I did! 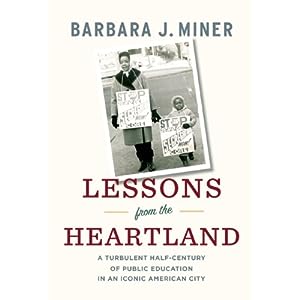 Barbara J. Miner's Lessons from the Heartland is what we sociologists used to call a "community study." I wish she had titled it Race and Education in Milwaukee, which would tell readers what it's about. Most people outside Wisconsin -- and all too many within the state -- have no idea how racist it was in the '60s and '70s. Miner recounts the story of how Henry "Hank" Aaron, the famous Milwaukee Braves outfielder who broke Babe Ruth's home run record, desegregated the formerly sundown suburb of Mequon. (A sundown town, you will recall, is a town that for decades was -- some still are -- all-white on purpose.) Even though Aaron was the most famous African American in Wisconsin and perhaps the United States, and although most whites in the state were Braves fans and Aaron fans, he still faced difficulty moving in. Then, when he wanted to take in his younger sister from Mobile, Alabama, she had trouble at school, where she was of course the only African American. Comments of "nigger" and "Go back to Africa" added up to misery. When Alfredia Aaron finally "burst out crying at the breakfast table," in Miner's retelling, Henry Aaron realized he had to do something. He and his wife took his sister to school to meet with the principal. Alfredia wrote, "The principal looked Henry right in the face and said, 'There wouldn't be a problem if you hadn't brought her to this school.'" Miner concludes, "Before long Alfredia moved back to Alabama."

Frank Huyler's Right of Thirst is a novel. But not just any novel. It's opening chapter is riveting. With extraordinary concision and a physician's sure knowledge, it relates the death of the narrator's wife. Its prose exemplifies perhaps the most famous passage in Strunk & White's "little book," The Elements of Style: the paragraph titled "Omit Needless Words." In its entirety, Strunk & White write:

Vigorous writing is concise. A sentence should contain no unnecessary words, a paragraph no unnecessary sentences, for the same reason that a drawing should have no unnecessary lines and a machine no unnecessary parts. This requires not that the writer make all his sentences short, or that he avoid all detail and treat his subjects only in outline, but that every word tell.

Their paragraph is a masterpiece. It embodies its own instructions, thus leading by example. Having read it in college half a century ago, I remembered parts of it even today. However, I misremembered its final phrase, recalling it as "but only that every word tell." My addition was instructive: omitting "only" makes the phrase more precise, concise, and powerful.

I cannot be certain that Huyler read Strunk & White, but I feel sure that he rewrote his first chapter a dozen times. Every word tells. Small details convey swaths of past life. "Her ... hair black where it had grown in again" divulges cancer and chemo. "As I eased in beside her the plastic crackled beneath us" tells that this is not just a bed but a sick bed, probably a death bed. Tiny details likewise reveal the emotional lifetime of the couple. When I finished the five-page chapter, I muttered a simple "Wow" to myself, and though about to go to sleep, began it anew and read it again.

I am now further into the book. After his wife's death, the main character, a cardiologist, leaves to do medical rescue work after an earthquake in some undeveloped country, perhaps Afghanistan. Not all is as rivetting. But that remarkable first chapter will stay with me, even influencing my prose, the way the beginnings of "The Bear" and The Sound and the Fury did half a century ago.

Finally, last June Beacon Press sent me A Disability History of the United States by Kim Nielsen, asking for a blurb by June 25, 2012. The editor at Beacon pulled out the flattery stop: "Acquiring this book reminded me of the experience I had when reading Lies -- changing the way I understood not just the past but also the present world around us." But it didn't work. I opened it only last week.

I read the introduction on a D.C. Metro train. Shortly after she signed the contract for the book, "after I'd been in the field [of disability history] for over a decade," Nielsen writes, a serious illness disabled her sixteen-year-old daughter. Now, Nielsen continues,

Making my daughter laugh until she tips over and falls down is really, really funny. Her core body muscles are so weak that strong laughter makes her fall over.

Her husband did it first. He tried to convince their youngest daughter, who was preparing to be Mary in the annual church Christmas pageant, to cry out, "My God, it's a girl!" at the pivotal moment. "My newly disabled daughter laughed so hard that she fell on the kitchen floor and couldn't get up.... Picking her up from the floor caused more pain, which somehow made the maneuver so precarious that we laughed even more." I sat convulsed on the Metro, first from imagining the impact of Mary's outburst upon the assembled multitude in the pews, should she take her father's advice, and then from the image of the young teenager, laughing so hard she couldn't get up. Somehow the scene in the kitchen emphasized and humanized her disability at once.

There's history in the book, too. Nielsen reminds us that the Huron man who brought the Great Law of Peace to the Iroquois stuttered so badly that many people could not understand him, so he spoke through an interpreter. I suspect she'll teach me more ... but I am only on page twenty.

Maybe some of you have read one or more of these volumes. Maybe you will augment these reviewlets into wikireviews -- another innovation! -- by adding comments to this little essay. I can do no more, however -- not if I ever wish to read a book of my own selection, to say nothing of writing one.