"Iraq" Is Still Arabic For "Vietnam" 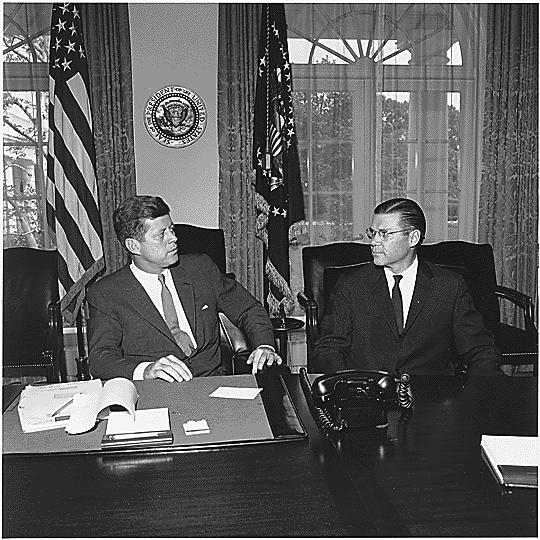 When George W. Bush and the neocons launched their war in Iraq, critics coined the slogan, "'Iraq' is Arabic for 'Vietnam.'" The point was obvious: Another long quagmire of a war in an inhospitable foreign land would lead once again to nothing but death, suffering, and defeat for America.

To see why "Iraq" is still Arabic for "Vietnam" we have to turn the historical memory dial back just a few more years, to 1962 and 1963. That was when John F. Kennedy struggled with the same dilemma now facing Barack Obama: How much, if it all, should we get involved militarily to help a corrupt leader who stays in power by terrorizing his political enemies?

Here's what JFK told interviewers in September, 1963, about South Vietnam under President Ngo Dinh Diem: "I don't think ... unless a greater effort is made by the Government to win popular support that the war can be won out there."

Here's what Barack Obama told reporters on June 13, 2014: "Iraq’s leaders have to demonstrate a willingness to make hard decisions and compromises on behalf of the Iraqi people in order to bring the country together. ... and account for the legitimate interests of all of Iraq’s communities, and to continue to build the capacity of an effective security force."

JFK: "In the final analysis it is their war. They are the ones who have to win it or lose it. We can help them, we can give them equipment, we can send our men out there as advisers, but they have to win it."

Obama: "We can’t do it for them. ...  The United States is not simply going to involve itself in a military action in the absence of a political plan by the Iraqis that gives us some assurance that they’re prepared to work together."

JFK balanced his calls for Diem to reform with what sounded like a promise that the South Vietnamese government would get U.S. aid no matter what it did or failed to do: "I don't agree with those who say we should withdraw.... This is a very important struggle even though it is far away. ... We also have to participate -- we may not like it -- in the defense of Asia."

Obama sounded a similar note: "Given the nature of these terrorists, it could pose a threat eventually to American interests as well. Iraq needs additional support to break the momentum of extremist groups and bolster the capabilities of Iraqi security forces. ...  They will have the support of the United States. ...  We have enormous interests there."

Just as Kennedy publicly denied that he contemplated any significant troop buildup, Obama insisted, "We will not be sending U.S. troops back into combat in Iraq." Yet JFK continued pouring "advisors" into Vietnam throughout his presidency, just as Obama promised that there would be "selective actions by our military ...  We have redoubled our efforts to help build more capable counterterrorism forces so that groups like ISIL can’t establish a safe haven. And we’ll continue that effort. "

Kennedy's warning that military aid depended on South Vietnamese government reform was not merely for public consumption. A year earlier he had sent Diem a private letter promising more money for Diem's army but adding a warning that the aid was "specifically conditioned up Vietnamese performance with respect to particular needed reforms" that would be "most effective to strengthen the vital ties of loyalty between the people of Free [i.e. South] Vietnam and their government."

Whether Obama has sent such a letter to Iraq's prime minister Nouri al-Maliki is anybody's guess.

There's another key difference. In his 1963 interviews JFK explained that Vietnam itself was not the crucial issue. It was more about the world's perception of America's power. Losing Vietnam would give "the impression that the wave of the future in southeast Asia was China and the Communists."

Obama has not come out and said anything quite like this. Yet he must be keenly aware that his critics at home -- and even some of his usual supporters -- are urging him to make sure the world knows that the U.S. still runs the show.

Just a week before Mosul fell to the ISIS/ISIL forces, liberal commentator Fareed Zakaria wrote that "the world today... rests on an order built by the United States that, since 1989, has not been challenged by any other major player." The big question, he said, is: "How to ensure that these conditions continue, even as new powers -- such as China -- rise and old ones -- such as Russia -- flex their muscles?" Now a new power is rising in the Middle East, and the question of preserving the world order is likely central to the conversation in the Oval Office.

Indeed another usual supporter of Obama's foreign policy, the New York Times, says that neocon Robert Kagan's recent article "Superpowers Don't Get to Retire" "struck a nerve in the White House" -- so much so that "the president even invited Mr. Kagan to lunch to compare world views." "Events in Iraq Open Door for Interventionist Revival," the Times' headline declared.

So Obama is stuck in much the same dilemma that faced Kennedy: feeling compelled, both by global geopolitical and domestic political concerns, to bolster an ally, but knowing that all the military aid in the world won't help such a fatally flawed ally win the military victory that the U.S. government wants.

How to resolve the dilemma? JFK insisted on keeping all his options open. Obama said: "I have asked my national security team to prepare a range of other options that could help support Iraqi security forces, and I’ll be reviewing those options in the days ahead."

JFK sent a seemingly endless round of envoys to Vietnam to study the situation and report back to him. Obama may well end up doing the same.

Have an effect? Looking back at the outcome in Vietnam, all one can say to Mr. Obama is, "Lotsa  luck, buddy."

And one must wonder whether Obama has told Maliki in private what JFK told Diem: U.S. troops would not actually be doing the fighting; we would only send military aid and advisors. Nevertheless, the U.S. would "expect to share in the decision-making process in the political, economic, and military fields." Looking back to Vietnam and ahead to Iraq, one can only say again, "Lotsa luck, buddy."

To the end of his life Kennedy remained caught up in a typical American fantasy: If you just work hard enough at it, you can reason your way to the precisely perfect solution. You can walk the fine line that lets you avoid hard decisions and instead find the perfect balance that embraces both sides of the dilemma. You can have it all. And because you are America you can bend smaller nations to your will, enforce that perfect solution, and insure a happy ending for everyone.

If the ghost of JFK still wanders the White House he might be waking Barack Obama in the middle of the night, saying, "Lotsa luck on that one, too, buddy."