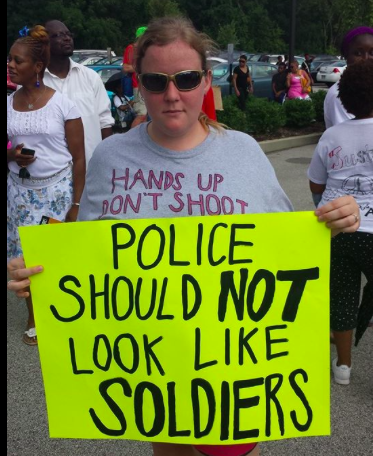 In the spring of 1954, beginning in Seattle, motorists started noticing mysterious pockmarks in their windshields. Officials blamed nuclear fallout, volcanic ash, extraterrestrials, even seagull shit. Soon motorists in California, Illinois, even Ohio noticed that their windshields, too, were suddenly sprouting pits.

Of course, the answer was that windshields had always been picking up pockmarks. The main cause was tiny bits of gravel, picked up by the turbulence of vehicles ahead of us, then striking our windshield. The difference was not in our windshields but in ourselves. In the aftermath of the Seattle headlines, car owners and journalists were now looking at their windshields instead of merely looking through them.

On August 9, 2014, sixty years later, African Americans in Ferguson, Missouri, noted that a police officer there had shot a black suspect to death, even though the man, Michael Brown, was at a considerable distance from him, unarmed, perhaps with his hands up, when the last and fatal fusillade was fired. They protested.

Since then, a spate of killings by police of unarmed African Americans in other places generated headlines across the nation:

— John Crawford in a Walmart toy department in Beavercreek, Ohio;

Of course, it turns out that, like windshields collecting pockmarks, police have been killing unarmed black men all along. During the previous decade, just in the vicinity of Ferguson, police in St. Louis and St. Louis County had shot at least forty men to death, mostly black, mostly unarmed. For that matter, Garner had been shot three weeks before Michael Brown, and Crawford four days before.

The difference was not in new police behavior, but in ourselves. In the aftermath of the Ferguson protests, journalists and the public looked at police behavior instead of merely looking through police eyes at the alleged behavior of the deceased.

The analogy between windshield pits and police killings can go only so far. When people looked at their windshields, they saw the pits. The pits were (and are) real. But the pits did not result from ominous forces, terrestrial or not. Ultimately, the pits were benign and unimportant. We have no reason to continue to scrutinize our windshields.

The police killings were (and are) real, too. But they are neither benign nor unimportant. To some degree, they do result from ominous forces. Hence we as a people, our journalists and media people as our eyes and ears, and our governments and legal systems have good reason to continue to scrutinize our police.