Blogs > Jim Loewen > What Do You Do When a Review Is Dishonest?

What Do You Do When a Review Is Dishonest?


Sociologist James W. Loewen is the author of "Lies My Teacher Told Me." 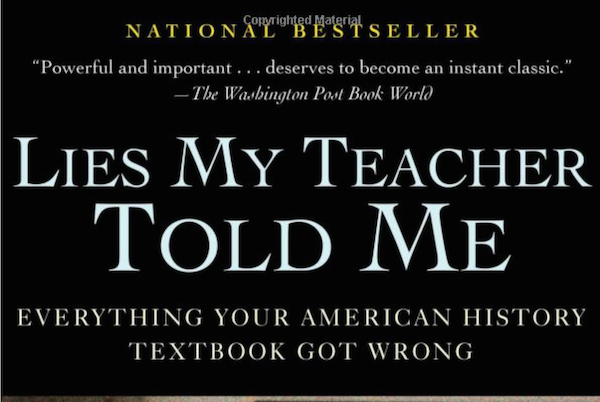 My book, Lies My Teacher Told Me: Everything Your American History Textbook Got Wrong, is probably the best-selling book by a living sociologist. Mostly it got glowing reviews. Some were negative. As I wrote to Bill Ott, editor of Booklist, the review service of the American Library Association, however, one was flatly dishonest.

Gilbert Taylor wrote it. Ironically, Taylor graduated from Carleton College, my own alma mater. According to the biography he posted on LinkedIn, reviewing for Booklist was his full-time job from 1991 to 2011. He lists no employment since then. In those twenty years he wrote thousands of reviews for Booklist, of books about history, current events, science, art, literature, sports, and fiction.

Here's his primary complaint about Lies: “To account for the deplorable situation [of poor textbooks], he [Loewen] offers this quasi-Marxist explanation: ‘Perhaps we are all dupes, manipulated by elite white male capitalists who orchestrate how history is written as part of their scheme to perpetuate their own power and privilege at the expense of the rest of us.’ "

That is simply not true. I made no such offer. Rather, I wrote the quoted sentence as a hypothetical, a straw-man of sorts, and then went on immediately to dispute it and offer better explanations. Indeed, the sentence reads like a caricature of a true Marxist explanation. In Lies, after making the explanation look less absurd by quoting some of its adherents, including Jonathan Kozol, Paolo Freire, and Henry Giroux, I went on to wonder “if it is appropriate to lay this bundle on the doorstep of the upper class. To blame the power elite for what is taught in a rural Vermont school or an inner-city classroom somehow seems too easy. If the elite is so dominant, why hasn't it also censored the books and articles that expose its influence in education?”

A paragraph later, I pointed out, "One of the glories of capitalism is that somewhere there are publishers who will publish almost any book, so long as they look to make a profit from it." I concluded: "In sum, power elite theories may credit the upper class with more power, unity, and conscious self-interest than it has." I went on to suggest other explanations and offer reasons why they are more persuasive.

None of this surfaces in Taylor's review. Instead, after presenting only my straw explanation, he then goes on to suggest alternative explanations of his own.

As I wrote to Bill Ott:

It follows that either Mr. Taylor is a knave or a fool. If he did not notice that I dismissed that explanation in favor of others, then he is incompetent. Probably he DID notice it but prefers to pretend to readers — who after all will not go on to read the book, not after such a negative review — that I advanced my "quasi-Marxist explanation" seriously. Then he is a knave.

In short, "[T]his is a dishonest review that does not serve your constituency well." I invited him "to examine the passage in question" and offered to ship him another copy.

Today I realize that it is possible that Taylor was so incensed by my ten chapters critiquing how history textbooks glide over any bad actions the U.S. has ever taken that he "knew" I must be Communist. In that case, he might have simply ignored the evidence of the next five pages of my book after my "quasi-Marxist explanation" because they did not fit his preconception of me. I suppose this is a version of the "fool" alternative — perhaps "honest fool" or "motivated fool" would be the term.

To his credit, Ott eventually replied:

It appears that you make a valid point about our reviewer quoting a passage from your book out of context and then drawing conclusions from that passage that amount to a misreading of your intentions. Therefore, we will remove the review from Booklist Online and instruct those vendors to whom we license our reviews to do likewise (you should know, however, that our licensees may or not respond to such requests in a timely fashion).

Ott went on to note, however, that if I insisted on his doing this, I might be shooting myself in the foot:

I would point out to you, however, that our review, despite its criticisms of your text, very likely did contribute positively to the book’s library sales. Librarians attempt to collect materials on both sides of controversial issues, that the fact that your book appeared in the pages of Booklist will certainly have prompted orders.

This is the old "there's no such thing as bad publicity" reasoning. Quite likely, it's accurate. A bad review in an important site like Booklist may be better than no review.

"Thank you for recognizing my point," I replied. "I don’t throw the term ‘dishonest’ around lightly, and at my age, I’ve received negative reviews more than once. His misreading had to be deliberate."

However, rather than merely winding up with no review, I asked for two other responses: a new review in Booklist, and that the managing editor who sent the book to Taylor follow up by asking Taylor about his review. If Taylor had no cogent explanation, then I suggested he "should never again be engaged by ALA." I argued, "You do owe that to me, and to your readers as well."

The editor refused any additional redress. My choice remained, a scurrilous review or no review.

At Amazon, for most of the time since it first came out, Lies My Teacher Told Me has led all books in sales in its category, historiography. Over time, more than 2,000 reviews of my book have appeared at Amazon, but Taylor's is still the second one under the category of "Editorial Reviews." His falsely framed quotation from me still sits front and center. As well, as of May 2015, his review lies on at least 450 web sites besides Amazon. My reputation therefore continues to be widely besmirched by him.

What should I do about it?

There is no letters column at Booklist, as there is at Journal of American History. So far as I can tell, Gilbert Taylor has no reputation to lose, certainly none in history. I know no way to respond at Amazon to the two essays, usually from Publisher's Weekly and Booklist, printed above "Product Details."

This essay is a bit of an answer, because HNN does reach some historians. As well, from now on anyone who Googles phrases like "quasi-Marxist explanation" or "perhaps we are all dupes" might get this essay along with Taylor's dishonest review.