Once More, A Comic Strip Imitates (My) Life

In the Washington Post for Tuesday, November 17, 2015, Stephan Pastis's comic strip "Pearls Before Swine" shows two characters on barstools talking about history. Pig tells Goat he has a question about the Civil War. Goat says, "Great. I love history." We pick up here: 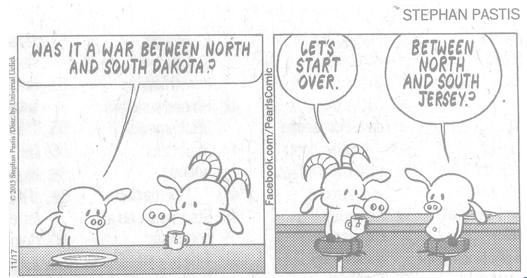 I knew it was supposed to be funny, but I couldn't laugh. Once again, a comic strip had imitated my life.

In the fall semester of 1993 at the University of Vermont, I was trying to finish my book, Lies My Teacher Told Me, which I had been working on for years. I decided to teach a course that I titled "Lies My Teacher Told Me: Issues in Secondary Social Studies Education." I could hand out some of my chapters and get feedback; I could also get students involved in wrestling with some of the issues.

Perhaps owing to its flamboyant title, the seminar oversubscribed. I wound up with more than 40 students — juniors and seniors majoring in history, the social sciences, and education.

On the first day of class, I gave out a quiz. I often do this, seeking to learn more about what my students know and don't know. One question asked, "The War in Vietnam was fought between ________ and ________." I wanted to see how many students said "between North and South Vietnam" compared to "between the United States and Vietnam." To my consternation, 22% of my students replied, "between North and South Korea!"

History and social studies education in the United States isn't working. I'm not the only person to say that. About the Civil War, Diane Ravitch found that about half of all high school graduates don't know in which half-century it was fought. More than 75% don't know why the South seceded, claiming Confederates favored states' rights or were upset about tariffs and taxes.

At the next class period, I denounced the 22% (not by name, of course). They pointed out that they were not born when the War in Vietnam ended, which was quite true and another way of making me feel 97 years old. I replied, "Well, what about the Civil War? Shouldn't you know something about that, even if you weren't alive?"

"Well, yes," they replied, reasonably. But then they pointed out that their teachers in U.S. History in high school never got anywhere near the Vietnam War. Their courses petered out somewhere around the Korean War.

One student even wanted half credit for getting "north" and "south" correct!

"What if you had put North and South Dakota?" I replied.

That's why I couldn't laugh at "Pearls Before Swine."