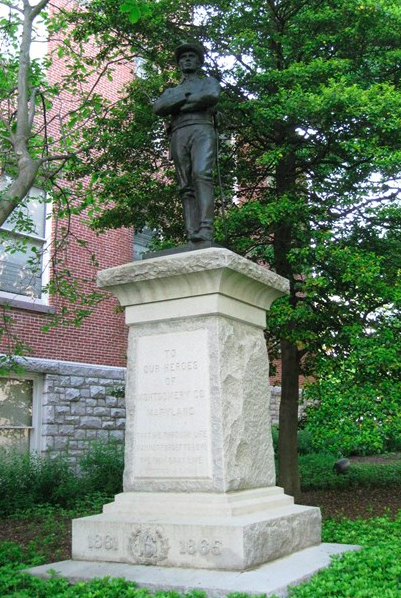 A year ago Montgomery County, Maryland, decided to remove its Confederate statue from its position of power, next to the courthouse in Rockville. Finally they have figured out where to put it.

White's Ferry, the only ferry left on the Potomac, lies 24 miles west of the courthouse. The father of the ferry’s current owner named his ferry for Confederate general Jubal Early because Early had a "rebellious, no surrender attitude." It is certainly true that after the Civil War, Early never changed his attitude. He still defended slavery as appropriate for African Americans, since "The Creator of the Universe had stamped them, indelibly, with a different color and an inferior physical and mental organization." He was an early proponent of the "Lost Cause" mythology and helped organize the Southern Historical Society to spread its biased views. The statue will be in good company. Former Washington Post journalist Eugene L. Meyer recently called it "as fitting a place as any.”[1]

However, Meyer professed to believe that the county is moving it "to pretend the whole dirty business of slavery and the county's role in trying to preserve it never happened."

In fact, every monument has something to teach us about three eras: what it's about, when it went up, and our present day. Rockville's Confederate monument tells us very little about the Civil War, however. Looking at it, no one would guess that Maryland sent 63,000 to the U.S. army and navy and less than 40% as many -- perhaps 24,000 -- to the Confederate side. The county has no monument to its Union dead, though it does have another, in Silver Spring, to Confederates. Nor does the monument say a word about slavery.

The monument does tell us how to think about the War: we are to revere the Confederate side:

To our heroes of Montgomery Co. Maryland

In actuality, the Confederate line came through Montgomery and Frederick counties three times during the war, en route to Antietam, Gettysburg, and Washington. The first two times, Confederates hoped to find succor, even provoke an uprising on their behalf, and were sorely disappointed.

En route to Gettysburg, J.E.B. Stuart's men kidnapped every African American they got their hands on, including about a hundred near the monument's current position, and dragged them into slavery in Virginia. Ironically, on the courthouse grounds a historical marker tells of his raid but keeps the enslaved people invisible, mentioning only the capture of "150 U.S. wagons."

Overtly, the monument says nothing about when it went up. Meyer says it was proposed for the Monocacy Cemetery, not far from White's Ferry, "but its symbolic importance in the county seat could not be denied." Exactly. What Meyer leaves unsaid is that during the Nadir of race relations, that ghastly era from 1890 to about 1940 when white Americans went more racist in their thinking than at any other time, neo-Confederate thinking changed. No longer were neo-Confederates satisfied to remember the Confederate dead in cemeteries. Rather, they desired to celebrate the Confederate cause at the seat of power. This is when triumphant monuments go up at state capitols and county seats across the South: white supremacist Democrats are symbolizing their control.

Moving the monument today says that members of all races are now again part of the body politic, as they had been during Reconstruction. It also shows that white residents no longer glory in proclaiming the "symbolic importance" of the Confederate cause at the county courthouse.

Around the U.S., sites that celebrated white supremacy, usually overtly when one examines their dedications, are now coming under attack. Around the U.S., defenders of these sites protest they are not defending white supremacy, oh no! Instead, they claim that removing them from their privileged positions on the landscape – at courthouses and state capitols, in important city squares, next to city hall in Dearborn, MI – is an effort to hide unpleasant history.

Quite the opposite! All we have to do, in the case of the Rockville monument, is to get the county to put up in its stead, visible from the sidewalk, a historical marker that hides nothing. It can tell accurately of the county's role in the Civil War, the statue's role in the Nadir of race relations, and the date that it moved, along with the reasons for its departure.

That tells far more history than the monument itself ever did.