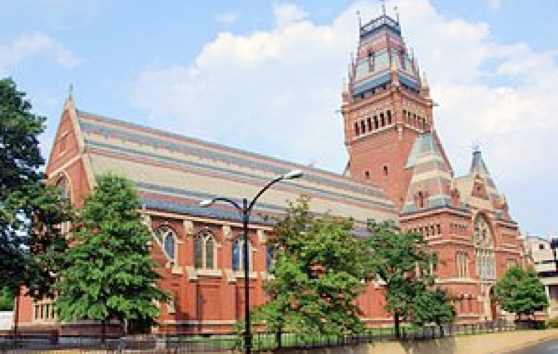 In 1964, I entered grad school at Harvard. At the time, Harvard was just entering the '60s. (It was not on the cutting edge.) All undergraduates were required to wear coats and ties for the dinner meal, so most dressed that way all day. All Harvard undergraduates were male; females allegedly attended "Radcliffe," a college with almost no faculty except in P.E.

Another hoary tradition afflicting Harvard was the "Gentleman's C." Professors and administrators openly acknowledged the split between "the gentlemen and the scholars." People like FDR and George W. Bush (oh all right, he attended Yale, then Harvard Business School, but close enough) never studied very hard, but Harvard passed them through anyway, hoping to get endowments from their rich parents and also hoping to bask in the reflected glow when they assumed their rightful place in the national upper class. "Donations from the rich make possible scholarships for the worthy," was the explanation.

At Harvard, cheating was a tradition too. To combat it, administrators took extraordinary steps. Half a century later, I still recall my disgust at Harvard for the way they tested graduate students at the end of our first semester. Fifty-five of us were taking the year-long introductory graduate course in "Social Relations," required for all students in sociology, social and cultural anthropology, and social and clinical psychology. They placed us in Memorial Hall, a huge auditorium honoring Civil War casualties, rather than our regular classroom. Then they had us sit in every third seat in every third row. All this was to achieve economies of scale, so they mixed us in with students from several other courses in the rows between. I still remember that they placed Sanskrit students in the rows just ahead of us, so those of us who might have been so desperate as to copy students' answers in another discipline couldn't, since even the alphabet was different!

Not one professor sat in the room. If students could not understand a question, even one with a misprint, they had no recourse. Only proctors were there, to make sure we did not cheat. The arrangements implied that the intellectual subculture was not anticipated to exist among graduate students at Harvard; only policing was in evidence.

Those of us from small liberal arts colleges where cheating was rare were also mystified by another Harvard final exam tradition. The "blue books" into which we were to write our essays all said, in large capital letters on their front covers:

DO NOT REMOVE PAGES FROM BOOKS.

DO NOT REMOVE BOOKS FROM ROOM.

We could not fathom this. Suppose I wrote two pages of an essay and then decided I was on the wrong track. Why wouldn't I tear the page out? We understood why the institution would not allow pages to be inserted into the blue books, but, taken out? It was also offputting to see those two sentences as final words of every course.[1]

As their absence from final exam rooms implied, many Harvard professors did not take undergraduate education seriously. Some actually called it "a distraction" from "my work," which was, of course, their (mostly) abstruse research. Most professors taught as few undergraduate courses as they could, and when they did, it was in huge lecture classes. I shouldn't really have conflated Harvard and Yale above, because Harvard was then distinctly worse than Yale: although it had only a few more undergraduates, Harvard had ten times as many TAs. They did most of the real teaching, to the extent that anyone did.

In 1965, we grad students were growing upset that so many college professors were such terrible teachers. We knew there had to be better ways to learn than just sitting through droning lectures. We cared about teaching, but the Department of Social Relations didn't. For our important jobs as TAs, it gave us no preparation, not even an orientation as to what resources were available to students, TAs, and faculty.

The next year, we set up a "Graduate Student Organization." Someone had sent me a black panther poster from the Lowndes County Freedom Organization in Alabama. It featured a menacing black panther with the slogan "Move On Over, Or We'll Move On Over You," and had a white space at the bottom, where we wrote in "Graduate Student Organization." I put it on the door to our office. We thought it was hilarious. To our surprise, our organization had already scared faculty members into giving us an office with a window — assistant professors got no windows. The poster pushed a professor of anthropology and his wife over the edge. "Isn't that disgusting?!" she said to him, and he agreed. Later someone — we think he — ripped it off our door.

Following the lead of the Soviet Union at the time, we elected a troika, three co-chairs, of which I was one. Among other things, we pushed for a course on how to teach. Eventually, too late for me to take it, they gave us one. Meanwhile, we tried some things ourselves.

Michael Schwartz, now a distinguished sociologist at Stony Brook, and I graded the final exams of our own section and also the other's, so we could discuss grading. This proved a rewarding undertaking, leading to interesting discussions of those essays that we had marked differently. The next semester, while I was doing dissertation fieldwork in Mississippi, Schwartz and another TA repeated the exercise, only this time with each other's term papers. They discovered two identical papers!

Not only were the papers the same, though typed differently, none of the references was dated after 1949, an eternity before 1966 in sociology and social psychology. It turned out that neither student had copied off the other, because neither had written a thing. Instead, both belonged to the same "final club" at Harvard. Final clubs, like fraternities and sororities elsewhere, including Yale's fabled secret societies, stored old term papers for members to submit. Unknown to each other, both students had chosen the same paper to hand in for the course. Also unknown to each other, their section leaders happened to be friends who wound up exchanging "their" papers. So they got caught.

Despite the policing precautions that Harvard imposed on Memorial Hall, Harvard was not really very interested in stopping cheating. So far as I know, the tradition continues. A few years ago, an incident received brief national attention: an exam proctor spent some time watching an undergraduate, perhaps in Memorial Hall, copying from another student, aided as I recall by a baseball cap pulled down over his eyes. When the cheater came to the front to hand in his exam, the proctor intercepted him and asked his name. "You don't know who I am, do you?" the cheater replied. Instantly he grabbed the entire pile of handed-in exams and threw them all, his included, high in the air. Then he ran out of the hall. The proctor was helpless.

As it did in some other areas, including social drinking, Harvard provided me with a good introduction to the folkways and mores of college cheating. For instance, I learned to do a seating chart at examinations, if the class is small enough. This information would prove useful later in my career, as the next two installments of this series will attest. Stay tuned.

[1] I am happy to report that extensive Googling reveals no blue book image with these offending sentences.