My Cheating Memoirs #2: Freud's Four Stages of Sexuality in Mississippi

The first exam I ever gave as a full-time teacher was in Introductory Sociology at Tougaloo College, a small black college in Mississippi, in late September, 1968. I had taught quite a bit in my last two years of grad school at Harvard University, however, and Harvard is a world leader in student fraud, so I knew to take an elementary precaution. While my students took the hour exam, I drew a seating chart.

My class met in the Social Science Lab, space that Dr. Ernst Borinski, professor of sociology at Tougaloo, had reclaimed from the basement of Beard Hall. The Lab was mainly a long narrow room, maybe 18' wide by 40' long, with two sets of long narrow tables running its length. Students sat elbow to elbow at the tables. 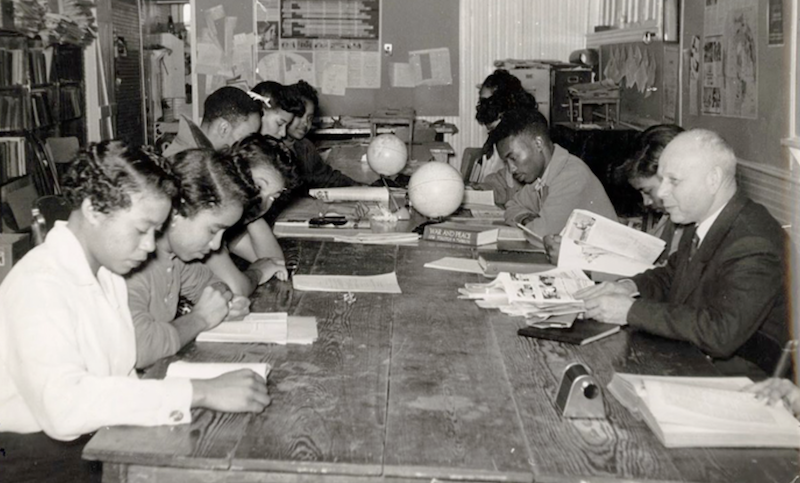 Ernst Borinski holds forth in the Social Science Lab at Tougaloo College in the early 1960s. Borinski, Jewish refugee from Hitler, is one of three subjects of a book, From Swastika to Jim Crow, film, and museum exhibit that is now circulating around the United States. As a result, this image is now widely known: I recall seeing it go past me on the street one Sunday morning in Philadelphia a couple of years ago. I was looking for a restaurant for brunch, and it was plastered on the side of a bus, part of an ad for the museum exhibit then showing at the new National Museum of American Jewish History. Photo courtesy Tougaloo College.

One of the main subjects covered early in Introductory Sociology is socialization — the process by which unformed babies take in the folkways and mores of society and become, not merely humans, but Tahitians, Americans, whatever. This insight may seem obvious to you, reading this paragraph as an adult, but I still remember the impact it made on me as a first-year college student, way back in 1960. I had never given much thought to how we became human. It just seemed natural.

Calling it "socialization" problematizes the process, however, and it comes to seem worthy of study, not "natural." As well, understanding socialization helps one become less ethnocentric. Students realize that eating three meals a day, having sex two times a week (the American average, sadly), and believing in one god is not natural. It's all cultural, and American culture is not the only or even always the best way to do things.

The power of socialization is considerable. Indeed, sociologists aver that socialization makes society possible. How do we come to internalize the folkways and mores? and with such force that we believe with all our being that our neighbor, who turns out to have two spouses, is not only wrong but even evil?

Hopefully the rest of my test was of a higher order of complexity.

The four stages question was complex enough for at least three of my students, however, all female. They all answered "oil" for the first stage. Now, my pronunciation of "r" is imperfect, so this might have been a simple misunderstanding, although when I went on to describe how tiny infants experience much of the world by putting it in their mouths, the term "oil fixation" does not make a lot of sense.

For stage three, all three students filled in "psychosexual," a place-holder of sorts, I suppose.

Then, for stage four, all three answered with a stage of psychosexual development so high that I, personally, have never reached it: "nonmanual!" 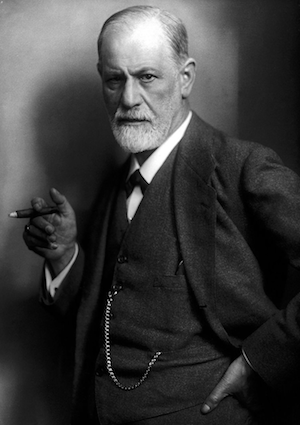 Sigmund Freud, inventor of the 4 stages of psychological development, including (in Mississippi) nonmanual.  Photo 1921.

Of course, the three students "happened" to sit next to each other. One student in 32 had answered with these four choices. The likelihood that a second student would do so would surely be less than 1 in 10,000, because they are pretty wondrous, but even if we simply assigned each student the same likelihood — about 1 in 30 — then the probability that three students would do so — and would sit next to each other by purest chance — would be less than 1/30 cubed or .00003 — a very small number!

I felt justified in giving each student a zero for the entire exam, with a written explanation. After photocopying the exams, I handed them back. As a new teacher, that's all I did. Now I know to meet with each student individually, discuss why they were taking sociology, and then engage in heavy counseling with them, either to persuade them to drop the course or to take it seriously.

Next semester, one of the three came to my office. "Mr. Loewen," she said, "I just wanted you to know that sociology is going to be my major, and I would never cheat in my major."

I thought that showed some standard of decency. Moreover, I had every reason to believe her, not least because she sat in the middle of the three. She had to be the innocent cheatee, the others the cheaters. So I changed her exam grade to the score she would have earned, "D." It wasn't a good grade — unsurprising, I suppose, given her performance on the four stages. Nevertheless, 62 is so much better than 0 that it raised her overall course grade from a D+ to a C+. I made that change at the registrar's, and she received notice at the end of the semester. We never spoke about the incident again.

Regrettably, I never asked her about the nonmanual stage. Now I'll never know what it is.