Some progressives on Twitter argue that there must never be a Trump Presidential Library. They don’t realize that it already exists. Visit it virtually to experience its many storied exhibits.

However, it tells us nothing about the books. Libraries are supposed to have books, are they not?

Of course, Donald J. Trump was notorious for never even getting to the end of a two-page intelligence report, let alone finishing a book, so perhaps this is appropriate.

Trump did have his own library, however, consisting of just three volumes: The Bible, The Art of the Deal, and Golf for Dummies. It is rumored, however, that he never read any of them, even the one he “wrote.” All three are still in print, however, so the new Trump Library can easily remedy its deficiency by buying them, shelving them in a closet, and titling the door “Library Stacks”.

Presidential libraries have the same relationship to history as a dog to a fire hydrant. The John F. Kennedy Presidential Library and Museum says you can “Immerse yourself in the dynamic history of the Kennedy Administration.” Just don’t expect to get a balanced assessment of his presidency, fatally flawed on Civil Rights and Vietnam. Go to the Sixth Floor Museum, in Dallas, for that.

Don’t visit the Richard M. Nixon Presidential Library and Museum to learn about Watergate. When it opened, of the sixteen film clips on display at the library, none treated Watergate. When it simply had to discuss Watergate, the library mystified it: "The story of Watergate is enormously complex. Even today, basic questions remain unknown and perhaps unknowable."

Ronald Reagan’s “Library & Museum” displays its partisanship in the very first words on its website: “In a storied career that spanned more than five decades, Ronald Reagan inspired Americans to act and achieve even more than they imagined. His legacy thrives at The Reagan Library where events and exhibits rediscover his values, actions and spirit of determination.” You won’t find much about Iran-Contra, but you will encounter at least five different Reagan busts and statues, not counting several more in the gift shop. 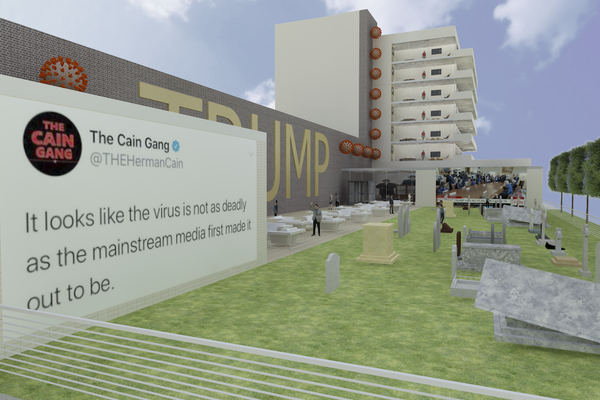 A special feature of the new Trump Library is its Rooftop COVID Cemetery for VIPs in Trump’s orbit who fell ill and died of this horrible disease.

Presidential libraries exist to get visitors to think well of their namesakes, not to think about them. In this company, the new Trump Library and Museum is a breath of fresh air. It boasts exhibits on such difficult topics as “Failed COVID-19 Response” and “Access Hollywood Tape,” and it gives Trump full credit for the attack on the Capitol.

Too bad it’s a spoof.