Readers of this blog will recall that the release of the Johnny Depp flick Public Enemies brought up bad memories of having had my book mined for research and argument by another author, repackaged and sold as a work of mass-market nonfiction, and then sold again as a film. Injury turned to insult when a person associated with the Depp film called me for some free consulting about Depression-era costume design. Shortly after I wrote the post about getting bushwhacked, I received a phone call from an old college friend, M.G. Lord who had just had the strange experience of seeing passages of a book she had written pop up in a book she had been sent for review.

Lord is a journalist, essayist, critic and the author of several books, one of which -- Forever Barbie: The Unauthorized Biography of a Real Doll -- joined the lively canon of Barbie Studies in 1995. Her account of the life and times of Barbie Doll is a fine example of scholarly journalism that was bound to be followed eventually: indeed, my own colleague Ann duCille had another book on black Barbie, Skin Trade (Harvard University Press, 1996) in the works at the same time. Barbie books are, I suspect, a bit like books about John Dillinger, or the Civil War, for that matter: there is a huge fan base, and a new book can always find an audience whether it is fresh and well researched, as Lord's and duCille's were or -- well, not.

Gerber, according to her web page, is an attorney, has worked on Capitol Hill and is"a senior fellow in Executive Education at the Robert H. Smith School of Business, University of Maryland, College Park."* In addition -- and this is the important information -- she"is an inspirational keynote speaker on leadership development, using moving stories from the lives of Eleanor Roosevelt, Katharine Graham and other great leaders to illustrate leadership lessons." Clients for her leadership seminars seem to be mostly, although not entirely, corporate. Coincidentally, Gerber also writes hagiography. She has published two books on ER ("Blanche Wiesen Cook, phone home!") and one on Katherine Graham. Hence, the talks sell the books, and the books sell her as a speaker. My guess is that Gerber has a new inspirational talk in the bag about Ruth Handler, Barbie's creator (or was it Barbie who was Ruth's creator? I dunno.)

Historians wouldn't know much about how to market their careers in this way. It's called synergy, in which each product sent into the market advertises the other products. But historians do know about plagiarism. We talk about it a lot, and we have seen enough high-profile cases in the last decade to make it of grave concern, whether it appears in a work intended primarily for scholars or in something intended for the educated reader and/or enthusiast. This is why, other than the possibility of an old friend being ripped off, I think questions about plagiarism raised by Lord about Ms. Gerber's book need to be aired in a scholarly setting. Lord's assertion is that Gerber has taken quotes from primary sources published in Forever Barbie and failed to note that Lord did that research and, in the case of interviews, actually generated the source in the first place.

In this piece, published in the Los Angeles Times over the weekend, Lord explains that when asked to review Gerber's book:

I found quotations from my research, verbatim and without specific attribution.

I showed the passages to my assigning editor. He had sent me a galley proof, not the finished book, and we both thought it likely that endnotes would appear in the final volume. But then the finished book came in, and though"Forever Barbie" was mentioned in the bibliography, there were no endnotes. I felt violated.

Histories do not grow on trees. The first person to cobble out a definitive narrative has to do a ton of work. You interview hundreds of people and hunt down documents, which can be especially elusive if influential people would prefer that they stay hidden. You separate truth from hearsay. Then -- with endnotes -- you meticulously source all your quotations and odd facts so future scholars will know whence they came.

Reached for comment by The Times, Gerber wrote in an e-mail:"I do believe that the credit Ms. Lord received was within the norm for a book which provides singular sourcing rather than footnotes. Having said that, if Ms. Lord feels that her book received insufficient credit for quotes from people she interviewed it is a simple matter to correct in the next printing. I have the utmost respect for Ms. Lord's book and have recommended it to others." 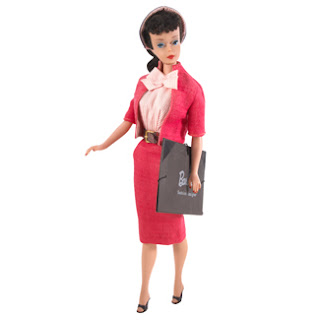 I would be interested to see what style manual has established that simply citing someone in the bibliography is the"norm" in publishing. Perhaps it was the same style manual that James Frey and Nan Talese consulted when they were trying to decide whether to publish Frey's second book as a novel or a memoir. It should also be noted that the business of citation is not just an"academic" question: not crediting your researchers is considered to be an ethical violation among journalists as well. Quoting without attribution certainly isn't the norm in academia: most works of history marketed to a mass audience (which folk, mysteriously in my view, are said to be intimidated by footnotes) nevertheless have a section at the end in which a phrase is paired with the source or sources that the passage drew on. There are several intellectual issues at stake here, the first two of which Lord emphasizes: that she deserves explicit credit for all the research she did (and conversely, that by not citing Lord, Gerber infers that she did the research herself); that not giving Lord credit is the theft of her ideas and a possible infringement on her copyright; and that the evidence cited in the book should be traceable by anyone wishing to check Gerber's work or interpretations.

But there is a potential third problem as well. Primary sources (particularly interviews and oral histories) are not necessarily in the public domain to begin with; furthermore, they don't enter the public domain simply by being published in a critical account. They are the property of individuals or institutions, which often require authors to obtain signed releases in order to publish quotations. At the very minimum, archives require that the materials be cited properly. Material quoted from interviews (Lord cites at least one instance in which Gerber used material from an interview done by the late Ella King Torrey that she had permission to use in the writing of Forever Barbie) cannot be reproduced by a third party without permission from the whoever owns the interview (this can be the archive, the original interviewer and/or the interviewee.)

In its Statement on Standards of Professional Conduct, the American Historical Association (AHA) one of the chief governing bodies of the historical profession notes:

In addition to the harm that plagiarism does to the pursuit of truth, it can also be an offense against the literary rights of the original author and the property rights of the copyright owner. Detection can therefore result not only in sanctions (such as dismissal from a graduate program, denial of promotion, or termination of employment) but in legal action as well. As a practical matter, plagiarism between scholars rarely goes to court, in part because legal concepts, such as infringement of copyright, are narrower than ethical standards that guide professional conduct. The real penalty for plagiarism is the abhorrence of the community of scholars.

Plagiarism includes more subtle abuses than simply expropriating the exact wording of another author without attribution. Plagiarism can also include the limited borrowing, without sufficient attribution, of another person's distinctive and significant research findings or interpretations....

Plagiarism, then, takes many forms. The clearest abuse is the use of another's language without quotation marks and citation. More subtle abuses include the appropriation of concepts, data, or notes all disguised in newly crafted sentences, or reference to a borrowed work in an early note and then extensive further use without subsequent attribution. Borrowing unexamined primary source references from a secondary work without citing that work is likewise inappropriate. All such tactics reflect an unworthy disregard for the contributions of others.

Gerber is not an academic historian, and may think that this liberates her from such narrow-mindedness. Someone like myself, for example, would have to be concerned about loss of employment in the event of a plagiarism charge being upheld, although that is not always the outcome. But because Gerber is not governed by a professional association, Lord has no place to take her complaint but the court of public opinion, since copyright litigation is a tedious and expensive route for any but those with the deepest pockets and all the time in the world. But at the very least, the book should be withdrawn by the publisher pending an investigation of Lord's allegations. The issue is not whether M.G. Lord"feels she has received insufficient credit" for her work, but rather that it is entirely unclear what parts of Gerber's book constitute work that was originally researched, articulated and compiled by Lord. And that question needs to be answered.

*Although Gerber was an executive education senior fellow in 2006, she may no longer be associated with the University of Maryland as her web page states. A search of this web page turned up no current link identifying her as a faculty member or fellow. I wrote Gerber this afternoon to ask if she would like to comment on Lord's allegations. She has not replied, but should she do so, I will update this post.