Mary L. Dudziak: September 11 and the meaning of America

Eighth anniversaries are a bit awkward. Across the nation, Americans did not stop in their tracks today, as they did seven years ago, at the first moment of impact. Perhaps two 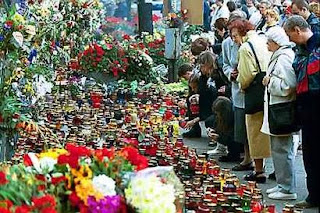 Below the fold, I borrow from an essay on remembering September 11.

Twelve months after the terrorist attacks, the nation remembered September 11, 2001. One year exactly after the first plane exploded into the World Trade Center, a moment of silence was observed in New York City. Across the nation, at the very same time, vigils were held, some in the dark of the early morning. Around the world, many stopped to remember....In Bangkok, Thailand, the Bangkok Orchestra singers joined 180 choirs around the world in singing Mozart’s Requiem, “to replace the cries of shock and fear that rang out one year ago” with song....

Reflecting a theme that permeated anniversary news coverage, Neil Conan of National Public Radio began his program that morning by reflecting on the moment when “we were all about to change, together.” The banner headline on America Online was simply “The Day We Changed.” The assumption that September 11 had been a moment of change was again ubiquitous. Yet, in an unscientific poll taken by the website for historians History News Network, 67 percent of respondents answered “no” to the question, “On balance, would you say that 9-11 changed America in a decisive way?” Only 28 percent thought that it had.... 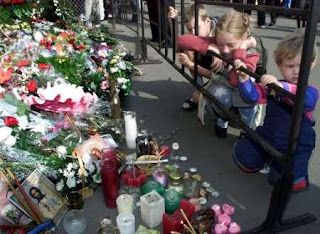 Within the United States and across the world, memories of September 11 have become ways of negotiating our relationship with America. American flag lapel pins, flags draped from buildings, flags on car windows, now tattered. The American flag itself has become an icon for remembering....

September 11 is remembered as an American event, yet it is a contested memory. “We Are all Americans,” was a headline in Le Monde on September 13, 2001; “We are still Americans – but not every day now,” wrote a Le Monde columnist a year later. By calling the dead “Americans,” a reader [of names of victims] at Ground Zero can be seen as resonating with this capacious identification with America, with the sea of American flags after September 11 across the world. Yet the Americanness of the event is called forth in a different way in some political rhetoric that sees the terrorist attacks as one moment in a struggle between the United States and the forces of evil in the world....And so, although memories of September 11 converge on constructions of and engagements with America, in that very site of narrative convergence lies the basis for division....

Years later, historians push back from the idea that September 11, 2001, was a date when “everything changed,” as if history had begun anew. But one thing seems clear. Even as memories of that difficult day begin to fade, and a new generation appears for whom 2001 is their parents’ history, this date and its meaning, like another “day that will live in infamy” has become part of the story of what the nation is, and what the nation means, in the early 21st century.

More from the book September 11 in History: A Watershed Moment? is here. More photographs from around the world are here.