Thomas Fleming, the author of more than 40 books, has written a children's book: Everybody's Revolution, published by Scholastic.

Fleming takes a multicultural perspective on the Revolution, emphasizing the contributions of a wide variety of groups. According to the book's description:

The dimensions of the patriot cause during the American Revolution were far more multicultural and multiethnic than we have for so long believed. Women, African Americans, Jews, Native Americans, Hispanic Americans, European immigrants, and young adults played leading roles in the struggle for independence from Great Britain. Today it seems students and teachers want to know more about the past than what a few famous white men did. They want to understand how women and men of different cultures and backgrounds contributed to our early history, and to making America what it is today. 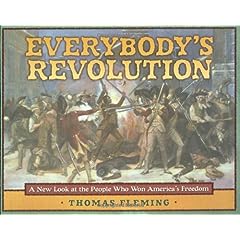 Disclosure: Mr. Fleming is a member of the board of directors of HNN.

I have only recently read a few of Mr. Fleming's articles, summaries, and responses to comments. I find his observations, explanations, and comments ranging from interesting to enlightening.

I believe the contrary of what has been stated in this article. That is, I do realize that "Today it seems students and teachers want to know more about the past than what a few famous white men did. They want to understand how women and men of different cultures and backgrounds contributed to our early history, and to making America what it is today."

Yes, that is what people "want". What people want, and what people get, are not necessarily the most relevant. What made America what it is today, for example, is not the focus on what all these races and religions and cultures did PIECEMEAL. Diversity is divisive. The men, women, boys, girls, blacks, whites, reds, yellows, pinks, browns, oranges that made America great did so by overlooking their own colorness, religiousness, sexiness, and language, to opt for a unity with a greater whole.

Those who today insist on "a woman's perspective" or "the black experience" or "Spanish language education" or multi-lingual ballots and godlessly hollow holidays are turning America's focus from its unity and harmony to a society divided by caste, class, race and sex.

It's true, what Mr. Fleming has written. It is a sad reflection of the loss of American students' understanding of America's history, America's underlying political principles (I intend the Federalist Papers, not the stark and now mutilated (amended) Constitution), and the importance of unity - both horizontal (differnt peoples, cultures, languages coming together in unity not "diversity") and vertical (citizens' cooperation with political leaders, congregants cooperation with church leaders, students' cooperation with university administrations).

I think this is very cool and look forward to taking a look at this next time I'm in a bookstore.