He's co-authored a book with Robert McNamara and was the first Western scholar to be given access to the archives in Hanoi, so it isn't surprising to learn that Vassar historian Robert K. Brigham sees parallels between Vietnam and Iraq. But he fairly shocked a small audience in Seattle today when he claimed that Condoleezza Rice is following in the footsteps of Henry Kissinger in Iraq, reversing the course of Bush administration foreign policy 180 degrees. Neo-con ideology is out, Metternich is in.

Brigham, who shared his perspective with scholars at the Army War College last Friday, says that Secretary of State Rice has adopted a Kissingerian 19th century balance-of-power approach to Iraq starkly at odds with the administration's democratic rhetoric in the first term. It's 1815 again, he says, referring to the Congress of Vienna, with Condoleezza Rice playing the part of Austrian Foreign Minister Metternich. Brigham's thesis is that Rice apparently has decided that the only way out of Iraq is for the United States to work covertly in league with Iran and Syria in the hope that they can control the chief groups of insurgents. In exchange for their help, he says, Rice is likely promising Iran and Syria through back channels the chance to become regional major players with American help.

This approach makes a certain amount of sense, he says, noting that both countries might hope to follow the example of China, whose economy began skyrocketing after detente with the United States in the 1970s. Nodding his head in wonderment he observed several times that China's per capita income has quadrupled since the 1970s. If Iran and Syria could achieve similar results their regimes could hope to remain in power forever.

But he also expressed reservations about Rice's old-fashioned approach, noting that it may not be possible for Iran and Syria to control the non-state actors in Iraq. It's not clear he said that we know nearly enough about the insurgents as we should to follow this course. While a deal could be struck with them if their end game is to run a government, no deal may be possible if they have some other goal in mind. And the sad fact is American intelligence is so weak in Iraq that the United States government doesn't really know what the insurgents want. 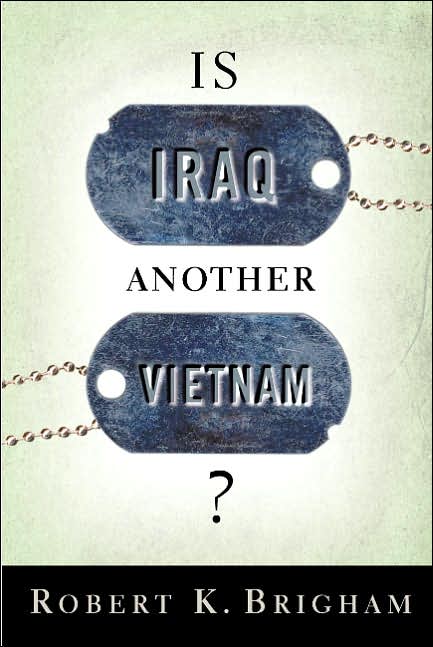 In all events a democratic Iraq is now an unlikely possibility. The best the United States may be able to hope for is a "decent interval" between the time we draw down our forces in Iraq and Syria and Iran become dominant there. He asked point blank if this is Secretary of State Rice's limited goal now. If so, it's Vietnam all over again. As Brigham recounted, Henry Kissinger in the 1970s concluded that because American popular support for the Vietnam War was declining the United States could not win. The solution therefore was to ask Moscow and Beijing for help in restraining North Vietnam while the United States slowly began the withdrawal of American forces. Kissinger always denied asking the Soviets and the Chinese for help in arranging a "decent interval." But documents released in the last year confirm that he did, says Brigham. Chinese leader Chou En-lai asked Kissinger how long a period this decent interval needed to last. Eighteen months, said Kissinger. And that is precisely how long the North Vietnamese waited before beginning their final push to conquer South Vietnam, Brigham noted.

Bob Woodward recently reported in State of Denial that Kissinger has become one of President Bush's chief advisors. Woodward has concluded this means the president plans to follow Kissinger's oft-stated Vietnam line that we should fight until victory. Brigham says Woodward needs to go back and read some history books. He'd discover that while Kissinger was telling the American public that victory in Vietnam was essential, he was secretly arranging to allow North Vietnam to retain 100,000 troops in the South after the United States withdrew, a provision that turned up in the Paris peace accords. That, says Brigham, doesn't sound like victory.

Brigham, who is friends with Bob McNamara and the author of the recently published book, Is Iraq Another Vietnam?, admits there are thousands of ways Iraq and Vietnam are different. But he says he's struck by several parallels. The strategy of clearing and holding ground is the same as in Vietnam. The rhetoric is the same; we will stand down as Iraqis stand up is classic Vietnam talk. And likely as not this war will end in failure as Vietnam did, with similar resulting recriminations in America for a generation.

The economic consequences could also be equally devastating. Remember the bad economy of the 1970s? It's coming, he predicted. Once again we have acted as if we could have both guns and butter. But by another economic measure the wars are dissimilar. Vietnam in inflation-adjusted dollars cost roughly half a trillion dollars over a period of twenty years. Iraq has cost more than that in less than four.

The worst thing about this wanton war on Iraq is that , just like Korea, VietNam, Iran,Chile, Guatemala etc of yore the American people came to realize that their administration of the day engulfed in another war ,invasion or conflict TOO LATE for them to take decisive action to stop it quickly or prevent it from happenning in the first place.

By now the American people should realize that the foreign policy of the USA is as much a matter of urgency and impact on their lives as employment, civil rights and taxes; for them, and theirs it is , virtually,a matter of life and death.

Iraq is much worse than Vietnam. And to a large extent because of lazy kneejerk and nauseatingly repetitive false comparisons between the two. The people who should be trying to explain the present debacle, come up with diagnoses, and action plans for rectification, etc. have been much too busy myopically being nostalgic for the old debacle, to do much more than grease the mechanisms on Karl Rove's traps.

The leaders of the anti Vietnam war movement in the 1960s and '70s did not spend most of their time talking about how it was a repeat of the disarmament movement of the 1890s.

A question; what are the number of Iraqi war brides in three and a half years of Occupation vs. the Vietnames war brides for the same peroid of time, Iraq vs. South VietNam?

Iraq is falling into the same pattern as Vietnam and despite the tremendous amount of good battle news I hear daily from soldiers in the field, America’s war on terror and its attempt to democratize Iraq is failing big time.

Getting out of Iraq before the job is done is what Bush Jr. is certainly concerned about. And he will do it if he can (only his peculiar god can save him now) if these lost boys in the White House can figure out what they’re supposed to do.

Republican administrations have a history of cut-and-running and Bush ,Jr. has to change that somehow, either by really finishing the job or changing the meaning of the words, “cut-and-run”. Nixon let Saigon get overrun, Reagan pulled the Marines out in Lebanon, Bush the First could have gone to Baghdad and finished the job, and Bush, Jr. did a big cut-and-run no-no when he joined the National Guard to avoid Nam and missed a year of meetings to boot. Now that was a hell of a job Junior!

Any speech or writing that is contrary to the wishes of those currently in power is dissent.

There will never, ever be a “democratic Iraq”. This is not possible as long as Americans are showing Iraqis how that is supposed to happen since there is no true democracy practiced in the United States either. Americans don’t seem to know what that’s all about. What America’s “culture of life” is all about is though is selective morality. Bush and his facist followers believe that Americans are the choosen people, that it’s all right to kill over 665,000 Iraqis, or deny killing them, either way it doesn’t matter, it’s just another holocaust denial in the making.


Iraq is not another Vietnam but it is like another Vietnam but as the article says, it’s the same rhetoric . If Kissinger is really advising Bush, then he’s going for “victory” , using dubble-speak or BS terminology to obfuscate reality while working covertly. For the moment, what matters in this great war on terror, are how many US troops are dying or how many insurgents are dying or why they are so committed to dying – since “American intelligence is so weak in Iraq that the United States government doesn't really know what the insurgents want.” Bush compares this fight to fighting Nazism when in fact he may end up being guilty of the most horrendous crimes since Hitler – this also doesn’t matter. Anyway he’s covered, his freaked out daughter is negotiating the purchase of thousands of acres of land in a South American country where he’d be immune from extradition charges.

Are Michael Moore and the Daily Kos Krew "dissenters?" Or is the New York Times leaking classified info about ongoing anti-terror programs "dissent?"

It says something horrible about our efforts in Iraq or Vietnam when telling the truth constitutes treason.

If it turns out that bad, or worse, it won't be because I want it that way; that's just the way I suspect it will go.

History rarely repeats exactly, I don't think the comparisons between Iraq and Vietnam will be close all the way. Iraq may in some ways end better, but I suspect that in most ways it will end much worse.

Perhaps the biggest parallel is supporters of the war labelling all dissent and even accurate reporting "aid and comfort to the enemy."

Let's see, there were about a million "boat people" who perished, plus about two million Cambodians mostly clubbed to death. That's a total of three million killings after we left because we left. And you think it would turn out worse if we left Iraq? That's a pretty bloodthirsty prediction.

The biggest parallel in both wars was the U.S. media giving aid and comfort to the enemy.

Iraq will probably turn out to be much worse, much harder to get out of. When we left Vietnam, there was no concern they'd be sending terrorists to attack us.

"But he also expressed reservations about Rice's old-fashioned approach, noting that it may not be possible for Iran and Syria to control the non-state actors in Iraq. It's not clear he said that we know nearly enough about the insurgents as we should to follow this course"

Iran and Syria can reduce or increase the amount of gasoline being thrown on the fire by tightening borders (syria) or pressuring Shiite militias (Iran)but the non-state actors can too easily scrape by on the revenues from smuggling oil, kidnapping, extortion and foreign donations to be formally controlled.

The insurgency is highly decentralized, not a rigid hierarchy under Communist Party discipline. This is 4GW not classical COIN.

Our best short-term bet now is de facto partition of the salvagable regions.