Jeffrey Wasserstrom: China Gets Beijing and Shanghai Ready for the 2008 Olympics and 2010 Expo

[Jeffrey N. Wasserstrom is Professor of History at the University of California, Irvine, and author of the new book China's Brave New World—And Other Tales for Global Times.] 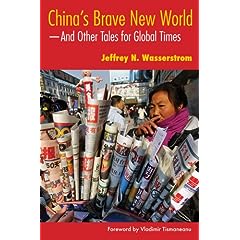 CHINA'S ECONOMY IS booming like never before and its social fabric is being ripped apart and knit together in novel ways. State-of-the-art sports stadiums, a renovated airport terminal, and a new financial district have been built or are under construction in pre-Olympic Beijing, where there's even been talk of seeding rain clouds to limit pollution.

And, not to be outdone by its rival to the north, Shanghai is preparing to host the 2010 World Expo, an event that will have decidedly twenty-first-century elements. Upon arrival, visitors will be rocketed from airport to WiFi-wired exhibition halls via magnetic-levitation trains that run through a city that now has more skyscrapers than Manhattan.

Yet amidst the cacophony of the new the historically minded can often hear curious--and sometimes disturbing--echoes of the past. Even the most seemingly futuristic phenomena turn out to have surprisingly old-fashioned aspects. This is certainly true of both the Beijing Games and the Shanghai Expo. Each will open a new chapter in Chinese history: one will be China's first Olympics, the other its first World's Fair. But some preparations underway for both are throwbacks to patterns dating to the 1900s—or even the 1800s.

To get Beijing ready for the Olympics, an old-style campaign to stop spitting is underway in which, as in the past, a top-down effort to reshape etiquette is presented as a crucial step toward improving the nation's image. A quick Web search for "anti-spitting campaigns in China" generates a YouTube posting that illustrates the parallels between the current campaign and one carried out more than fifty years ago. The posting includes footage from a propaganda film shot in Maoist times (1949-1976). Back then, as now, spitting on the ground is targeted as not just unhygienic but symbolic of backwardness. (It is no accident that in the YouTube footage young people are shown telling people much older than them to expectorate into a handkerchief.)

And mass campaigns of this sort began well before the Communist Party took power. Chiang Kai-shek's Nationalist Party, an earlier authoritarian regime, also launched them. Injunctions against spitting were part of Chiang's "New Life Movement" of the 1930s. They, like the current etiquette drive, took place at a time when efforts were underway to incorporate Confucian ideals into a drive to modernize the country.

Recent discussions of the Shanghai Expo have been equally retrograde. At least to anyone who has read The Devil in the White City: Murder, Magic and Madness at the Fair that Changed America, Erik Larson's recent bestseller about Chicago's 1893 World's Fair. Larson captures beautifully the mood in early 1890s Chicago as local boosters, enthused about the potential to modernize their city, struggled to find a way to outdo the Eiffel Tower. In the end, they chose to build the world's first Ferris wheel.

Shanghai boosters have also been talking about how the Expo can modernize their city. There have been lively discussions—not yet concluded—about how to create a symbol for the Expo as memorable as the Eiffel Tower and though this plan has been eventually abandoned, there was even talk of erecting the world's tallest Ferris wheel in Shanghai.

There's also something reminiscent of an earlier era in how the Beijing games and Shanghai Expo are becoming rolled together to transform the summer-long sprint of the Olympics into a drawn out two-city relay. China's rulers hope that this will keep international attention (though ideally not the sort of highly critical attention as of late) focused on their country for several years. To encourage people to think of the two events as linked, the Shanghai Expo is sometimes referred to as the "Economic Olympics." Joint promotional activities for the two spectacles are also underway on the official Beijing 2008 Web site.

For the historically minded, this pairing of an Olympics and a display of global goods and new technologies brings to mind Paris in 1900 and St. Louis in 1904, when the Olympics (not yet a big deal) were folded into a World's Fair (then still the great genre of international gathering).

What this brief look at the lead-up to Beijing 2008 and Shanghai 2010 suggests is that while China of the 1990s defied categorization because it contained both Communist and capitalist elements, the situation is now different. The aspect of China that points most strongly toward the need to think beyond standard categories is the juxtaposition of elements associated with radically different eras.

This dimension of China's situation confounds outside observers and many Chinese alike. After all, there just isn't any standard reference work about how countries develop to explain a place that is preparing for a moon shot yet is still plagued by forms of labor exploitation—like those detailed in recent reports about kidnapped youths forced to man brick kilns under atrocious conditions—that can seem uncomfortably reminiscent of those described by Industrial Revolution-era critics of nineteenth-century, no-holds-barred British capitalism. Such as William Blake (who gave us the phrase "dark Satanic mills") or Charles Dickens. Or, of course, Karl Marx, whose magnum opus on social inequities and the mistreatment of workers, Das Kapital, briefly but perhaps appropriately rose high up Beijing bestseller lists in 2006.