[Mr. Cole is Professor of Modern Middle Eastern and South Asian History at the University of Michigan. His website is http://www.juancole.com.]

John McCain says that it isn't too important when American troops leave Iraq, that the main thing is to ensure there aren't troop deaths. He said that the US has troops in a lot of places, including South Korea.

Contrast the Arizona senator's glib comment with reporting about the real Iraq:

' There have been hundreds of unit homecomings across North Carolina in the past six years, as troops returned from Iraq and Afghanistan. Few, if any, though, were as emotional as the 1132nd Military Police Company's Tuesday. The 1132nd lost four men in action in three attacks this spring, all in less than a month. More than 20 troops were wounded, some of them badly. The unit's dead accounted for nearly half the state Guard total of nine killed in action in Iraq. The losses weren't just bad luck. The unit was doing a particularly dangerous job in a bad place at a bad time. It was training Iraqi police officers on the edge of the Baghdad slum called Sadr City, a vast stronghold of the Shiite insurgents loyal to anti-American cleric Muqtada al-Sadr. The insurgents waged a campaign of attacks against U.S. forces this spring. '

Then there is that, you know, problem about it costing $12 bn. a month to keep US troops in Iraq. That may be chump change to McCain. But most of us feel like we were sold a lemon on the pretense it was a Lamborghini and we aren't making any more payments on it. There are also problems about that Korea thing he keeps trotting out.

McCain doesn't seem to follow the news too closely. I don't think the South Koreans are very happy with the US these days, so maybe if McCain were more in touch he wouldn't use an old Cold War analogy.

Then there is the problem that after a bombing, Baghdad looks like this: 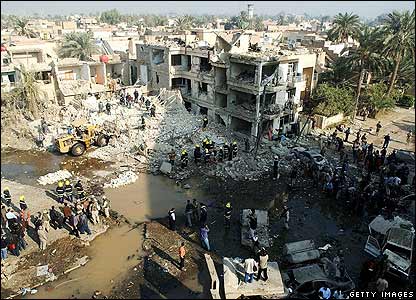 Do you notice how Iraq and South Korea are not actually very much alike? Do you really think they will become alike in the next 4 years? Could Republicans please stop using John Gaddis's brain-dead"analogy," which never made any sense to begin with?

"Iraqi police say a roadside bomb has killed five people riding minibuses in Baghdad. An officer says the bomb exploded near a bridge in the mostly Shiite Hurriyah neighborhood around 10 a.m. Wednesday. He says a woman and 7-year-old boy are among the dead, and at least 10 other people are wounded. Meanwhile, police say two mortar rounds hit a busy street in the central Baghdad area of Karrada, killing a civilian and wounding five others. The officers spoke on condition of anonymity out of security concerns."

In any other city in the world, these two attacks (there was at least one more, plus 4 bodies found) would be front page news. And, note that even the report of them came from Iraqi police too afraid to give their names to the press! When police are themselves so insecure and exposed to reprisals that they they have to issue crime reports anonymously, it is not a good scene.

Ned Parker of the LAT reports that some in the al-Maliki government--and senior members of the Islamic Mission (Da'wa) Party and the United Iraqi Alliance coalition of which it is a part-- are seriously considering asking US troops to leave the country. They believe they can now handle security on their own, and that the Bush administration's demands that they surrender a great deal of national sovereignty in the proposed Status of Forces agreement are unacceptable.
Read entire article at Informed Comment (Blog run by Juan Cole)
comments powered by Disqus