Niall Ferguson's Harvard Colleagues Support Him, but Not LGBT Historians 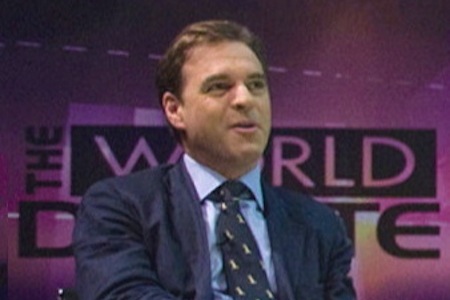 UPDATE 3:58PM: Don Romesburg, co-chair of the Committee on LGBT History, issued the following statement on Monday to HNN, calling for Harvard to demonstrate its commitment to taking LGBT history seriously:

[Niall] Ferguson's subsequent attempts to clarify his statement unfortunately show little more understanding of the history of sexuality than his initial comment did. The Committee on LGBT History encourages him to consulting the field’s extensive scholarship, much of which our members have written, to avoid echoing unfounded and discriminatory stereotypes and to deepen his understanding and analysis of the LGBT past. Harvard should show leadership here by, at a minimum, hosting a major conference about LGBT history and encouraging Ferguson to attend. It is also high time that Harvard makes a new tenure-track hire in LGBT history. The incident has underscored the value of teaching and researching LGBT histories. This confronts ignorance about LGBT people, lives, and communities, and in the process, builds a more accurate historical record overall.

Historians at Harvard University have remained generally silent on the Niall Ferguson/John Maynard Keynes controversy, but several faculty members voiced qualified support for Prof. Ferguson in light of his public apologies in emails to HNN. But other GLBT historians outside of Harvard have been critical of the history department's response.

Faculty at Harvard University are used to being under the spotlight, but when historian Niall Ferguson suggested in a speech at an investors' conference on May 2 that economist John Maynard Keynes cared little for the future because he was childless and gay, the spotlight exploded.

Seemingly every media figure remotely connected to economics weighed in on the controversy, from Paul Krugman to Matthew Yglesias to Jonah Goldberg. The Atlantic covered the story; so did the New York Times.

On May 4, Ferguson apologized for his comments on his blog, and clarified his remarks a day later in an open letter published in the Harvard Crimson. “I said something stupid about [Keynes], he wrote, but he denied any homophobic or slanderous intent.

Ferguson's contrition was met with approval by many of his colleagues in the Harvard history department. “He obviously felt that his off-the-cuff comments went beyond the careful standard he wants to maintain and he has apologized for them,” fellow Harvard historian Charles Maier wrote in an email to HNN, adding that Prof. Ferguson is a “great teacher and … a fine scholar.” Mark Kishlansky, who studies British history, also voiced his support. “[Prof. Ferguson] took full responsibility for the potential harm his comment may have caused, and characterized his gaffe as 'stupid,' not a word used lightly by high-level academics.”

Other historians outside of the Ivy League were more critical. “There are people at Harvard who should speak out about this,” Marc Stein, an historian of sexuality at York University in Canada, wrote in an email – especially historians of women and gender, who are well represented at Harvard. Unlike at Yale and Princeton, he continued, Harvard's history department doesn't seem to regard the history of sexuality or LGBT history as important fields of study, and Ferguson's remarks don't help matters. “My recommendation … would be that the university immediately authorize a search to hire an LGBT historian; Ferguson could then enroll in the class and begin his education in the history of sexuality and LGBT history.”

George Chauncey, a historian of gays and lesbians at Yale and an expert witness in the Proposition 8 trial Hollingsworth v. Perry , told the New York Times last week that, while he is not qualified to gauge the economic merits of Prof. Ferguson's comments, they did “resembled past attempts to undercut gays in public life.” Prof. Chauncey's fellow Prop. 8 expert witness Nancy Cott, who is on faculty at Harvard, did not respond to an email from HNN.

The Harvard Crimson, for its part, ran an editorial highly critical of Ferguson on Friday. “Ferguson’s blunder,” wrote the editorial staff, “highlights the need for professors to be ever cognizant that flippant speech is doubly dangerous from the mouth of a respected academic representing a respected institution, reflecting poorly on both himself and Harvard.”

Prof. Ferguson has made similar arguments about Keynes in the past.

Berkeley economist Brad DeLong has called attention to a 1995 article in which Prof. Ferguson claimed that "the attraction Keynes felt" for German banker Carl Melchior "strongly influenced" his judgment on the Treaty of Versailles, of which Keynes was quite critical.

Prof. Ferguson also wrote, in his 1999 book The Pity of War, that Keynes was deeply unhappy about the outbreak of World War I, "perhaps because the boys he liked to pick up in London all joined up."

Other economists and historians have made similar arguments in the past. Gertrude Himmelfarb wrote in a February 1985 article for Commentary, "In the long run we are all dead,' also has an obvious connection with his homosexuality."

This article has been updated.