The Real Uncle Tom and the Unknown South He Helped Create

Thomas Fleming is a former president of the Society of American Historians. Mr. Fleming is on the advisory board of HNN. This article is adapted from Thomas Fleming’s new book, A Disease In the Public Mind – A New Understanding of Why We Fought the Civil War. Part three of a three-part series. 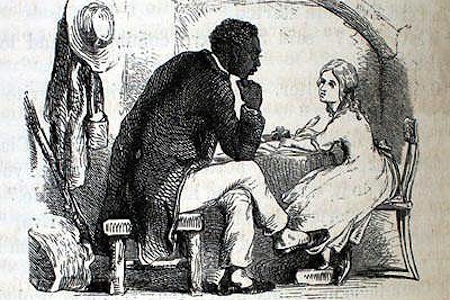 Today’s readers of Uncle Tom’s Cabin have no idea that there was a real Uncle Tom. Neither did the readers of the 1850s. His name was Josiah Henson. He was born a slave in Maryland in 1789. Harriet Beecher Stowe admitted that his story was part of the inspiration for her novel. But she never adequately explained why her fictional Uncle Tom was so different from the real one.

The difference was and is profound. The real Tom should prompt modern readers to reevaluate slavery’s impact on American blacks. The traditional story runs something like this: slavery was a degrading, humiliating, demoralizing experience. Any black man or woman who endured it was reduced to subhuman status. Therefore they and their descendants, even when emancipated, would have to be treated like children at best – or creatures from an alien planet at worst. Before and after the Civil War, this idea played no small part in poisoning the idea of black equality in the American public mind, North and South.

To inspire outrage and pity, Mrs. Stowe portrayed her fictional Uncle Tom as an impossible mixture of competence and servility. She mentioned almost casually that he ran his master’s plantation. But she never gave readers a glimpse of him at work. Instead she spent pages describing Tom as so kind-hearted he verges on a pathetic yes man who rarely if ever challenged his master’s decisions.

Josiah Henson gives us a very different picture of slavery in his autobiography, which was published in 1849. When he was still in his teens, his master, Isaac Riley, began calling him “a smart fellow.” His fellow slaves predicted he would do “great things” when he became a man. Soon he was vowing to “out-hoe, out-reap, out-husk, out-dance, out-everything every competitor.” He did not hesitate to compete with white men as well as fellow slaves. He had a low opinion of the farm’s sloppy careless overseer. When he caught the man defrauding the master, Henson reported him.

Isaac Riley fired the thief and Henson asked for a chance to oversee the farm. He was soon raising “more than double the crops, with more cheerful and willing labor, than was ever seen on the estate before.” Not only did he superintend the day to day work, he brought the harvested wheat and tobacco to market and bargained skillfully to bring home astonishing profits.

When Riley welched on his promise to let Henson buy his freedom for a reasonable price, he quietly planned and executed an escape to Canada with his wife and four children. There he started a sawmill that was soon selling thousands of feet of black walnut lumber in Boston and New York. He persuaded the Canadian government to let him start a manual labor school to teach escaped slaves skills that would increase their earning power.

There were black men like Henson in every southern state. By the 1850s, black overseers were far more common than most northerners of that era – and most Americans of the twenty-first century -- have realized. Some historians estimate that blacks predominated in that position on roughly 70 percent of the South’s plantations with one hundred or more slaves. On smaller plantations, the overseer was almost always black.

The importance of these black men can be glimpsed from a cry of distress from a Louisiana planter when his slave overseer died.”I have lost poor Leven, one of the most faithful blacks that ever lived. He was truth and honesty and without a fault that I ever discovered. He has overseen the plantation nearly three years, and has done better at it than any white man had ever done before….”

Managing plantations was by no means the only goal to which a black man might aspire, even though he was a slave. Twenty seven percent of the adult male slaves in the city of Charleston were blacksmiths, carpenters, coopers -- skilled artisans. They operated as virtually free men. A slave carpenter or shoemaker would and could advertise his services, negotiate his own contracts, receive and pay money and even live in his own house. His slave status required him to pay a percentage of his income to his owner. Otherwise he was a relatively free man.

Slave artisans frequently made enough money to buy their freedom, even in the 1850s, when the soaring price of cotton made a slave’s market price as high as $1700 -- $25,000 in twenty-first-century money.

The South’s 260,000 free blacks had an even more impressive net worth. They owned property worth $25,000,000. About one in every hundred owned slaves – as many as fifty in some cases. Even more surprising to modern readers is the number of slaves who worked in factories, displaying a gamut of industrial skills. The papers of David Ross, who operated the Oxford Ironworks in Campbell County, Virginia, one of the largest factories in the nation, reveal that the business was staffed and run entirely by trained slaves. A man named Abram was responsible for the highly technical and demanding day-to-day management of the blast furnace. The furnace keepers, Abram’s chief assistants, had to know precisely how much charcoal and limestone to put into the furnace when it was in blast. All the other skilled workers -- blacksmiths, potters, hammer men, miners – were slaves.

The profitability of cotton made money an ingredient in raising productivity on many plantations. Owners frequently paid between $40 and $110 a year to experienced slaves for doing a good job. Slaves were also permitted to grow fruit and vegetables in their gardens, and sell the produce. One industrious field hand made $309 in a single year selling peaches and apples on the side. In modern money that sum would be about $5,000.

In tobacco farming, where a high degree of skill was necessary, planters frequently paid slaves as much as $300 a year to guarantee a good performance. Rice cultivation required equal amounts of savvy. The plantations were divided into dozens of small watery plots surrounded by dikes. One traveler visited a rice farmer in Georgia and found a slave engineer who received “considerably higher wages” (in the form of presents) than the white overseer for his skill in building and maintaining the dikes,

Some planters, to increase productivity, entered into profit-sharing arrangements with their slaves. One Alabama owner permitted his bondmen to keep two thirds of the profits of the plantation, setting aside a third for his private use. From the slaves’ share came the cost of clothing and food for them and their families, the taxes for the farm, and medical bills. “What clear money you make shall be divided equally amongst you in a fair proportion agreeable to the services rendered by each hand,” the contract stated. “Those that earn most shall have most.”

These startling facts have come to light in the last three or four decades, thanks to depth research by a new generation of historians, who are trying to get beyond the myths perpetrated by abolitionists. Perhaps the most startling discovery these statistic-minded scholars have uncovered is the South’s breathtaking wealth. In the 1850s, the fifteen slave states were by far the most prosperous section of the nation. Southern farms, many of them slave-managed, were between 35 and 50 percent more profitable than comparable farms in the free North and Midwest.

In 1860, the South, considered as a separate country, would have ranked as the fourth richest nation in the world. Southern whites had a higher per capita income than citizens of France or Germany or Denmark. Instead of the pleasure-wallowing wastrels portrayed by the abolitionists in their assaults on The Slave Power, most southern planters were hard working businessmen who studied the latest techniques in scientific farming and did their best to keep their slaves contented in spite of the restrictions and confinements of the system.

On a per capita basis, the four wealthiest states in the Union were South Carolina, Mississippi, Louisiana and Georgia. In the top twelve were only two northern states, Connecticut and Rhode Island. These newly discovered facts demolish the standard assumption that the North was the dynamic section of the country and the slave-encumbered South was mired in backwardness and poverty.

In the past, black men and women have been given very little credit for the South’s remarkable wealth. It is time to revise that mindset. The slaves participated in the system, not as mere automatons, but as achievers, frequently mastering the technology of the South’s agriculture as well as the psychology of leadership. A substantial number of black men and women did NOT succumb to the worst tendencies of the system. Their industrious lives within the unjust institution of slavery were frequently a triumph of the human spirit over adversity that should no longer be overlooked.

These new facts about southern slavery lead to an interesting and possibly significant conclusion: slavery was evolving. Overall it remained a deplorable institution. But American freedom, sometimes disguised as business enterprise, was constantly seeping into the system. Would it have continued to move toward more and more freedom?

Many planters did not like slavery but were baffled by how to eliminate it. Haunted by the fear of insurrections, they did not think the black and white race could live in peace if both were free and equal. This was a view that was shared by almost everyone in the North as well as the South. In most northern states, blacks could not vote, serve on juries, or obtain decent jobs. They lived a segregated way of life in housing, schools, even churches.

It seems inevitable that sooner rather than later, masters would have had to confront American slavery’s greatest failure – its lack of freedom not only for gifted leaders like Josiah Henson as well as skilled artisans and factory managers like Abram – but for the children and grandchildren of these men. Slaves with above average intelligence and abilities would find it harder and harder to tolerate a system which did not reward them adequately and condemned their descendants to the caprices of being sold to settle a dead master’s estate or pay the debts of a dissolute living owner. More and more individuals like the Louisiana planter who mourned the death of his black overseer might have become ready to risk emancipation, rather than live with such gross injustice on a day to day basis.

Alas, the momentum of the multiple diseases of the public mind North and South would prove too strong for this fragile hope to acquire substance. The myths of The Slave Power and genetic black inferiority twisted in this deadly wind while the South’s unspoken fear of a race war was visible night after night in the slave patrols that continued to ride the shrouded southern roads. As the 1850s lurched toward a close, a perfect storm of deadly emotions was poised to engulf the United States of America.