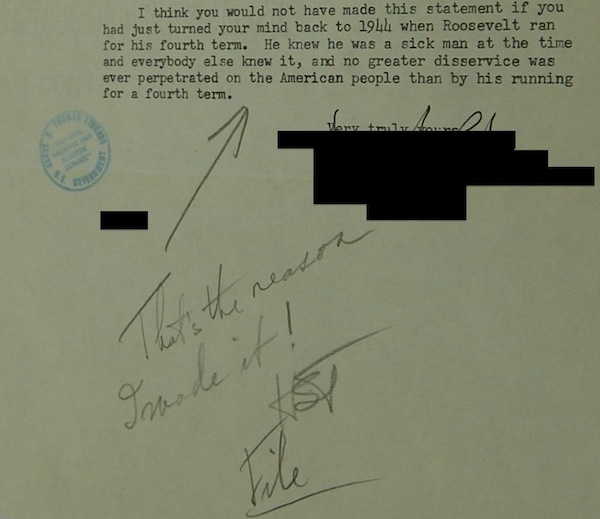 This brief but powerful comment, handwritten on a letter he received from an Ohio businessman, is former president Harry S. Truman’s only known documented opinion about President Franklin D. Roosevelt’s failing health and decision to run for a fourth term in 1944. I found the letter at the Truman Library in Independence, Missouri, in the post-presidential papers, a series that few scholars have reviewed.

The letter on which President Truman wrote this comment referenced a statement that Truman made in early 1956, about how the president of the United States should be of great physical strength. The immediate context of that remark was the ongoing speculation over the health of then-president Dwight D. Eisenhower. From the brief notation on the letter, however, it appears that Truman’s motivation for making the statement were his feelings about the health of his predecessor, President Franklin Delano Roosevelt.

The previous September, President Eisenhower suffered a serious a heart attack, and his convalescence lasted for weeks. During that time, rumors spread that he would not be able to run for a second term. By February 1956, concerns over Eisenhower’s fitness to stand for re-election had grown significantly; his doctors pronounced him recovered, but -- at least partly due to the politics of the year -- questions remained. The president promised an announcement about his political future on March 1.

In a February 6 column, titled, in the Toledo Blade, “President Giving Impression Of Man On Top Of Job, Tacking Routine With Enthusiasm” journalist Marquis Childs of the Post-Dispatch wrote that the question of a “full-time president or a part-time president” was “already being raised by former President Truman and others. Mr. Truman has said the President must have the strength of six men to do the job.”

An Ohio businessman read the article and didn’t like what he called a “crack” at Eisenhower. He wrote a letter to Truman saying that “we all know [Eisenhower] doesn’t have that kind of strength.”

The letter, on the writer’s business letterhead, concludes, “I think you would not have made the statement if you had just turned your mind back to 1944 when Roosevelt ran for his fourth term. He knew he was a sick man at the time and everybody else knew it, and no greater disservice was ever perpetrated on the American people than by his running for a fourth term.”

Truman, reading the letter, penciled an arrow to this last clause – about the “disservice” – and wrote “That’s the reason I made it! – HST. File.” Truman did not respond to the businessman.

In February 1956 a substantial amount of attention surrounded the question of Eisenhower’s health and whether he would -- or could -- run again that fall. Truman’s six words may be read as either meaning that he made the remark because of his experience with Roosevelt, and was commenting, obliquely, that FDR’s decision to run in spite of his failing health was the wrong one; or it may mean that he made the remark as a more direct comment on Eisenhower’s condition and pending decision about the upcoming election. Either way, Truman had the unique experience and perspective to make such a remark.

Roosevelt’s decision to run for a fourth term despite his rapidly-failing health -- and to choose Truman as his running mate -- ended up putting Truman in the White House after only eighty-two days as vice-president. What exactly Truman knew about Roosevelt’s health before accepting the spot on the 1944 ticket has been documented and examined in the last sixty-nine years. For example, David McCullough, in his 1992 book Truman, cites Truman’s depiction of his August 18, 1944 lunch with FDR: “‘His hands were shaking and he talks with considerable difficulty…It doesn’t seem to be any mental lapse of any kind,’ Truman said, “but physically he’s just going to pieces.’”

Alonzo Hamby, in his 1995 book Man of the People, wrote, “Not having seen F.D.R. face to face for more than a year, [Truman] was shocked by Roosevelt’s haggard appearance and the way his hands trembled as he attempted with little success to pour cream into his coffee.”

A comparison between two of FDR’s addresses to Congress -- that of December 8, 1941 and March 1, 1945 -- demonstrates the obvious decline in his appearance noted by so many. It is fair to say that Truman, when he joined the ticket, knew at least that Roosevelt was very ill; until the discovery of this letter, though, how Truman felt about the president’s health and choice to run in 1944 had remained undocumented. Two Truman scholars, Richard Kirkendall and Alonzo Hamby, and Sam Rushay, the Supervisory Archivist of the Truman Library, agree that this handwritten notation is the only known documented expression of Truman’s feelings on the matter.

In my research for a book on the politics and history of presidential libraries, I have found that there is a wealth of undiscovered history there – even in those where papers have been open for decades. Historians, writers and other researchers should take more advantage of these enormously valuable archives.