The President Should Take the Lead in Crafting Legislation

Glenn Speer is a freelance writer who received his PhD in American history from the City University of New York. 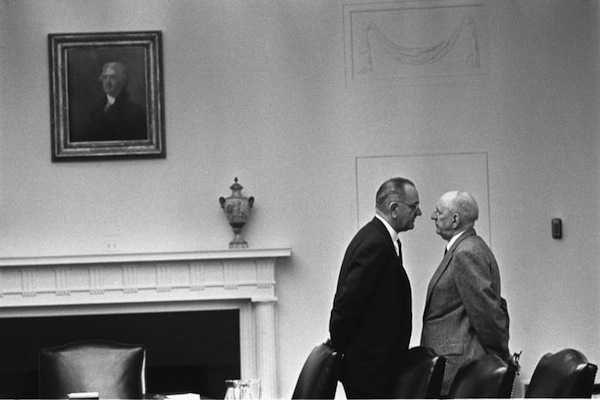 One prominent critic of the Constitution writes:

“…opposition to the Constitution as a constitution, and even hostile criticism of its provisions, ceased almost immediately upon its adoption and not only ceased, but gave place to an undiscriminating and almost blind worship of its principles, and of that delicate dual system of sovereignty, and that complicated scheme of double administration which it established…The divine right of kings never ran a more prosperous course than did this unquestioned prerogative of the Constitution to receive universal homage.”

He scorns the House of Representatives which he describes as

“…divided up, as it were, into 47 seignories, in each of which a Standing Committee is the court-baron and chairman lord-proprietor. These petty barons, some of them not a little powerful, but none of them within reach [of] the full powers of rule, may at will exercise an almost despotic sway within their own shires, and may sometimes threaten to convulse even the entire realm itself.” Each committee was, he said, a “Miniature House.”

For him, the bulwark of the Constitution, the altar upon which it was to be worshipped, i.e., the hallowed system of checks and balances, had become completely anachronistic. “The trouble with the theory is that government is not a machine but a living thing.”

These quotes are not in today’s Washington Post or New York Times nor is the author discussing the latest government shutdown caused by that deadliest of diseases, Congressional Paralysis.

Hardly. These are the words of Woodrow Wilson, excerpted from his 1885 book, Congressional Government and his subsequent work, Constitutional Government in the United States, published in 1908. By that time, he believed he had come up with the cureto stem a recalcitrant and predominant legislative branch -- a heavy dose of presidential power, a revitalized, if not supreme Executive. The p[resident, himself, not merely the office, would determine the position’s effectiveness. As he put it, “His office is anything he has the sagacity and force to make it.”

Wilson was inspired by the English parliamentary system where the prime minister doubled as his party’s leader in the House of Commons (wielding legislative power) while retaining some of the clout of the Executive. He wanted to incorporate this party leader model into our presidential system and work actively (and proactively) with Congress to achieve his legislative goals.

And in his first term, Wilson did exactly that -- successfully. The first Southerner to be elected in his own right as president since Zachary Taylor, Wilson wasn’t afraid to buck tradition, and soon after his inauguration, he ventured to the Capitol to address Congress -- no president had done that since John Adams. He frequently went to the Hill, and made himself at home in the President’s Room near the Senate chamber (though not all his hosts were as happy to have him as a guest). Rallying the Democrats against the pro-business Republicans, he was intricately involved in the passage of his “New Freedom” program -- in a way that he could not have been had he stayed back in the White House. The landmark legislation included the establishment of the Federal Reserve , the Clayton Anti-Trust Act, a less onerous tariff, and child labor protection. His grand achievement to what was, in some respects, a “new constitutionalism,” with the president taking a decisive legislative role. Of course, Wilson’s second term (won in a cliffhanger of an election) ended far differently, with the defeat of the League of Nations treaty. By then, he had overreached, an Icarus destroyed by the sizzling, shining Senate sun.

Almost a half century later, another Southerner, a veteran of both the House and the Senate, was elected vice president. He had won his new office while a sitting senator,. While in the upper house, he had been majority leader, and as such, considered himselfthe second-most powerful man in Washington. His friends and most observers were mystified when he left that post to run on his party’s national ticket. But the ever confident politician wasn’t worried. He liked to say, “power is where power goes,” and he was certain he could straddle both the executive and legislative branches in his new constitutional role as president of the Senate, making him as big a player, maybe even more powerful, than he would have been had he remained as majority leader. The means of his ascent would have been as chair of the Democratic Party Conference in the Senate, making him, in effect, majority leader -- and then some -- in all but name.

Only Lyndon Baines Johnson could launch such a scheme.

Robert Caro, in his monumental biography of the Texas legend, has appropriately called Johnson “The Master of the Senate.” Had he become chair of his party’s conference in the Senate he would have been both that body’s maestro and impressario.

But this creative tinkering with the status quo was seen -- unsurprisingly -- as a power grab by President John F. Kennedy and those around him. Johnson's former lieutenant Mike Mansfield was prepared to accede to Johnson’s wishes but other senators were neither amused nor amenable. This marked the beginning of Johnson’s miserable tenure as vice president.

But more than another half a century has passed and looking back over the last fifty years, it seems that Johnson may have been on to something.

After all the Senate majority leader (or chair of the Democratic -- or any party -- conference) is not a constitutional office. Nor does the Constitution stipulate that the Speaker of the House must be a member of the House, as Sanford Levinson has noted. Article 1, Section 3 states that “The Vice President shall be President of the Senate, but shall have no Vote, unless they be equally divided.” In presiding, the vice president may not be a member as such -- but what exactly is he or she? A non-member with the right to break a tie? Or a presider and not a divider... unless there is a deadlock which would allow for her or him to cast the determining vote? In such a case (hardly hypothetical), the vice president can tip the balance and make American history. That’s what they mean by the weight of office. The fact is, the vice president is already there, in the United States Senate chamber. He may not be a formal member of the club but he has the run of the clubhouse.

If the Chief Justice of the United States Supreme Court can describe (in his confirmation hearing) the role of a judge as that of an “umpire,” what is to keep the Vice President from taking on the job of “ manager?” After all, a manager doesn’t play (unless he is a player-manager which would certainly be an apt analogy for a prime minister), he manages. A chair of a party conference could certainly do that. And what better perch could there be for a manager than the Senate clubhouse? Why pretend that the president of the Senate will be impartial?

This leads back to the question of separation of powers Is that separation enforced by a wall or is it, in fact, what Madison might call a “parchment barrier?”

Would our Republic be endangered if we accepted that the vice president inhabits both the legislative and executive branches? Would our liberties be threatened if the occupant of that position also served as his party’s leader in the Senate?

Imagine if Kennedy and Senate Democrats had granted Johnson his wish. Might he not have brought his ingenious legislative acumento bear in enacting the president’s program? With Johnson on (or near) the Senate floor, cajoling, advising -- managing -- might the civil rights bill have passed in 1963? Could the vice president (as the Democratic leader in the Senate) have achieved for his president the same result that he, himself, was to accomplish when he succeeded to the office?

Given our current morass with the government shut down and teetering on the edge of default, is there any wonder that there is a certain nostalgia for vibrant presidential leadership? Who would have thought during all of the discord over Vietnam that we would look back so fondly on Lyndon Johnson, who whatever else his flaws could get things done?? And as for Wilson, an effective domestic leader, is it also any wonder why he has come to be reviled by some Tea Partiers? He used his power -- as president and party leader -- to force through an agenda that in their eyes was the pivotal step in creating “Big Government.”