"Our Town" Once Revives the America We Loved 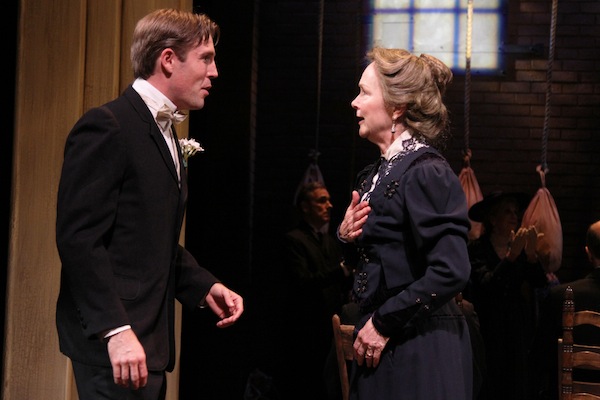 It is 1901 in Grover’s Corners, New Hampshire, a small village just over the state line from Massachusetts. Everybody from high school students to housewives to a newspaper editor and his wife to the local constable in his dark blue uniform are preparing for the day on a stark stage. An elderly narrator steps forward and in gorgeous language tells you about Grover’s Corners and the people in it. The quiet, quaint village is, he says, an unimportant place and nobody of any importance ever came from there.

He is wrong. Grover’s Corners is every small town in America and, in a sense, everybody of importance came from there. We all came from there. It is a metaphor for the little burgs that Norman Rockwell made so famous in his paintings.

Yet another revival of Thornton Wilder’s Our Town, celebrating its 75th anniversary, opened last week at the Shakespeare Theater of New Jersey. It is a sturdy version of the American classic play highlighted by superior acting. It is also a reminder that now, in 2013, the small towns of Thornton Wilder and Norman Rockwell are just fond memories.

Our Town begins very slowly in act one when the narrator sets up the characters in the story. Nothing really happens. People wander around the stage and at the end of a tedious act one it is obvious that two high school kids are going to fall in love and get married.

The play, an historic work that takes place between 1901 and 1913, gets much better in acts two and three, when Wilder probes the humanity of the people in Grover’s Corners. They are a simple people with simple lives, and yet they represent everything that is America. The teenaged boy, said to be a superior baseball player, gives up the game to marry his high school sweetheart, who has loved him since she was 12. Their parents are real and deeply nuanced people, as are the other folks in the New England village, fumbling and stumbling through the early years of the twentieth century. They are not city slickers, rich merchants or people always in the news. They are plain folks, just like all of us.

Director Joseph Discher does a fine job of bringing this tiny New Hampshire hamlet back to life and gets good performances from Philip Goodwin as the stage manager, Malachy Clearly as Doctor Gibbs and Marion Adler as Mrs. Gibbs, Jordan Coughtry as George Gibbs the ballplayer, Nisi Sturgis as Emily Gibbs, his wife and Isaac Allen Miller and Allison Daugherty as her parents.

The actors give us a stark but somber look at America in 1901 to 1913, a land without televisions or cell phones.

Historians will love this play, and it should be staged often around the country in its 75th year, because it recreates rural life of 100 years ago. The play is not so much about what life was like in 1913, but how life is so different today. Then, the star crossed teen lovers of the play watch the stars and read books at night and communicate with letters. Today they would spend three hours on the computer each night, watch their favorite shows on cable television or a smart phone or ipad and communicate with cell phones and text messages. Would George, apparently a gifted baseball player, give up the game today or go into major league baseball and earn millions?

In the play, young women died giving birth to a baby, a common and sad risk of having children at the turn of the last century. Today, very few mothers die in childbirth. A couple in the play talks endlessly about a once in a lifetime trip to Paris that never takes place. Today they could just add up their frequent flyer miles, scout the internet for travel deals, get someone to drive them to the airport and go. The town’s newspaper editor in the play is mortified that there might be a mistake in his paper. Today he would have to be worried about the paper going out of business because everybody gets their news from the computer.

Life is certainly different in some respects today, but in others it is not. The American portrayed in the play, and their hopes and dreams, are really not any different from Americans today. The beauty of the play, too, is that it has always been, and remains today, a wonderful small town oasis from the hurly burly of modern life. The people in the story have their triumphs and tragedies, just like we all do. Wilder’s genius was to make them so much like all of us.

Our Town is everybody’s town.