by Alan M. Kraut and David A. Gerber 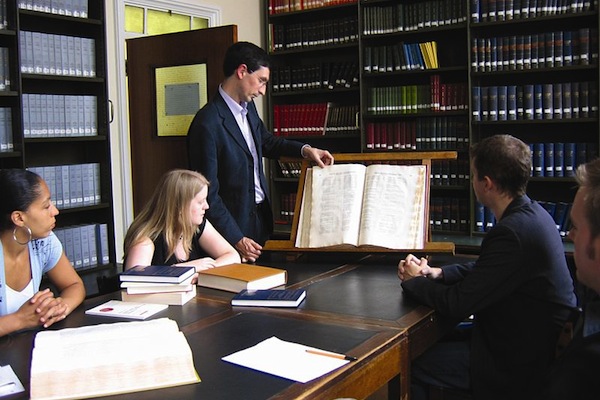 Over the last half century there has been a revolutionary change in the identity of those who have undertaken the historian’s craft as well as in the character of the products they have produced. We have attempted to explore that transformation from the perspective of a small corner of American historiography in our recently published collection, Ethnic Historians and the Mainstream: Shaping the Nation’s Immigration Story (Rutgers University Press, October, 2013).

The revolution is two-fold. First, there has been a dramatic change in the subjects historians think appropriate to address. Rather than confining themselves to the activities of national elites, scholars have expanded their field of research to include the study of peoples, groups, and processes across borders and boundaries, especially the experiences of ordinary women and men. Second, those navigating these new historical streams are quite different in background from many of their predecessors. A profession once dominated by white male Christians predominantly of northern and western European heritage and heterosexual in orientation, is no more. A more recent generation of scholars, including the editors of Ethnic Historians and the Mainstream, is considerably more diverse and quite conscious of the sea change in personal background and scholarly perspective that they embody.

Many historians of a “certain age” cannot help but chuckle as we ponder what readers of the Journal of American History in 1963 would have made of the most recent issue which features essays about urban racial segregation, the Texas-Mexican borderlands, American Indians and environmental activism, Black Power, and the gray squirrel. And, we well recall that a year earlier in his 1962 presidential address, president of the American Historical Association Carl Bridenbaugh warned that “many of the younger practitioners of our craft, and those who are still apprentices, are products of lower middle-class or foreign origins. ... [who] find themselves in very real sense outsiders on our past and feel themselves shut out.” Proceeding to express his prejudices masked as concern, Bridenbaugh explained, “What I fear is that the changes observant in the background ... of the present generation will make it impossible for them to communicate and reconstruct the past for future generations.” i

Although our discipline is consecrated to preserving memory and marking epic transitions, too often we have failed to communicate to younger colleagues , especially those who have entered the profession since 1980, how far historians have come in overcoming Bridenbaugh’s exclusionism and broadening the field of what is regarded as suitable topics of research. For them, history is as they found it when embarking on their careers -- diverse as the rainbow in the identity of practitioners, open to new ideas and people, and radically eclectic in its interests and concerns. Freed of past constraints, they have been able to open the door yet wider to a diversity of scholars prepared to broaden and deepen the discipline’s agenda with international and transnational frameworks that energize and reconfigure the study of identities, population movements, group formations, economies, and polities, not to mention the natural environment itself such that the understanding of the global and local are being transformed.

As this dramatic reshaping of our discipline proceeds, we might well engage in some stocktaking. That is the principle purpose of Ethnic Historians and the Mainstream. It is a collection of eleven autobiographical and bio-bibliographical essays by historians who entered the history profession between 1970 and the early 1990s. All have written and continue to write about immigration to the United States. Immigration history is a good barometer for measuring change in who addresses the past and how they do it. The contributors are all first-generation academics. They come from a wide variety of ethnicities -- Italian (Virginia Yans), Jewish (Deborah Dash Moore), Slovak (John Bodnar), Filipino (Barbara Posadas), Polish (Dominic Pacyga), Irish (Timothy Meagher), Chinese (Judy Yung), Japanese (Eileen Tamura), Cuban (Maria Cristina Garcia), Sierra Leonean by way of Nigeria (Violet Showers Johnson), and Lebanese by way of Mexico (Theresa Alfaro-Velcamp) -- and relatively recent (within three generations) international migrations. Eight of them are women.

The editors sought diversity more than anything else in recruiting the essayists, but also looked to age and, to the extent we could discern it from published work and occasionally from personal contacts, the capacity to tell a good story. We asked each historian to analyze the relationship between their backgrounds (identity, family history, and community) and the dawning of their aspirations to write immigration history, the subjects they conceived to write about, and their experiences in entering the profession of history and becoming professional scholars.

Some of these historians were among the first students of a particular background to enter the profession; and some of the more senior women embodied a dual integration: that of gender as well as ethnicity and/or race. The collection’s contributors speak to the occasional struggle to get their interests legitimated in graduate school, and the evolution of these interests as they matured as scholars and gained insight into the forces that had formed them. They speak to the encouragement they received, but also to sources of discouragement.

The essays hold a mirror up to the discipline of history and to American academia, and help us to understand where we have been, are now, and where we may in the future be going. Of course, it’s reductionist to say that historians simply write their autobiographies camouflaged by footnotes. Professional scholarship is powerfully influenced by academic discourse, historians’ networks, peer review, and rigorous professional standards. But the essays do remind us that we do not enter the process of becoming historians as blank slates, and for many of us, what’s imprinted on that slate remains a force directing our intellectual evolution.