How the Historical Profession Has Changed Since 1970

Steve Hochstadt is a history professor at Illinois College. 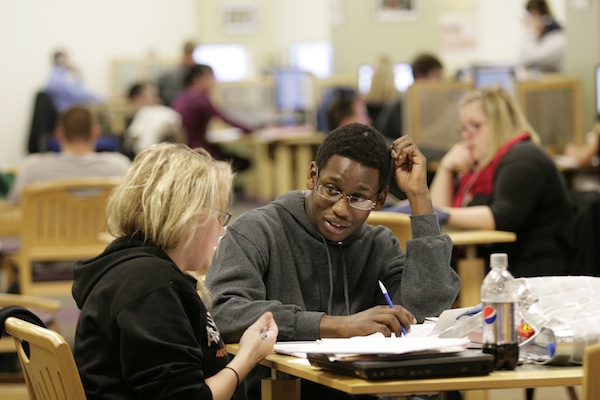 Students studying at the Ohio University library. Image via Flickr.

A while ago I ran across a forty-three-year old issue of the “American Historical Review” (AHR), the most important scholarly journal for historians in the United States. Dated October, 1970, this compilation of the best, and most famous, American historians offers a revealing glimpse at the structure of the history profession, and more generally at the whole American academy.

The title page lists some of the most prestigious historians of the time, who served as the editor and on the board of editors. They were all white men, all ten of them. A few women are also listed on the title page, all assistants in the editorial process.

The AHR’s purpose is to publish the best research articles and review the best books about any historical subject. Six articles were published in that issue, all written by men. 117 books were reviewed: among the authors were 119 men and 11 women, about half of whom were co-authors with their husbands. Each issue of the AHR also carried advertisements by publishers for their latest books. I examined about one-quarter of them closely: books by eighty male authors and six female authors were displayed.

In 1970 women rarely appeared as historians. They showed up even more rarely as subjects for historians: of the 117 books reviewed, only one had a woman’s name in the title, and none of the titles included the words “women”, “gender”, or “family”. Men’s names appeared in about one-third of the titles. Other significant historical subjects were also absent: although there were many books about war, no books about slavery or Native Americans were reviewed and only one book concerned race, a volume about South Africa. The only book about an African American was an early biography of Martin Luther King, Jr., who had been murdered two years before.

This 400-page volume is not just a snapshot of the American historical profession near the end of the civil rights era, but also a study of what history was. History as written about, taught in universities and schools, and understood by the public was the study of great men, writings about war and politics and diplomacy, analyses of male thinkers and doers by other men. Except for books about other parts of the world, history was white.

Since 1970, much has changed. The unquestioned dominance of white men in America is long gone, in our national life as a whole and in the history profession in particular. After over one hundred years of male presidents of the American Historical Association, the primary organization for historians which also publishes the AHR, the first woman was elected in 1987. Since 1996, half of the presidents have been female. The most recent issue of the AHR was produced by a very different group of historians: the editor is male, but the board of editors has seven men and six women. Three of five articles were written by women, one about family in colonial America. Most books being reviewed are written by men, but the ratio is two to one instead of ten to one. Advertisements for books show a similar ratio.

Those data show that complete equality between men and women in the history profession is approaching, but has not been achieved. The proportion of women among those who earned a PhD in history has increased gradually and steadily from about 25 percent in the late 1970s to 45 percent in 2010. Once they went on the job market, however, women appear to have had equal success with men. About half of each gender had a job lined up when they received their degree. Women were as likely as men to land jobs at four-year institutions. Promotions from assistant to associate to full professor, and the job security of tenure, were equally likely for men and women.

Historians are more diverse than ever before. The dominance of the sons of well-established families of northern and western European background has given way to greater ethnic variety: many more historians are the first in their families to have attended college, come from immigrant familes, and/or are openly homosexual. The proportion of history PhDs earned by minorities has risen from under 10 percent in the 1980s to 19 percent in 2010.

Just as historians are different, so is history itself. There are still many books about politics, war, and great men, but also many about great women or which analyze gender, both female and male. Native Americans and African Americans, and the racial issues behind their unequal treatment by white America, are no longer uncommon subjects.

These remarkable shifts in my profession are one example of the larger processes which have transformed American society over the past few decades. The data point to further movement in the future toward even more equality, in gender, in race and ethnicity, in sexual orientation. Perhaps paradoxically, the more equality within the history profession, the more our history of inequality will be discussed and written about. Both changes make some old white men uncomfortable. But they’ll have to learn to live with them.