America Could Use Its Own Truth and Reconciliation Commisions

Richard Rothstein is a research associate of the Economic Policy Institute and senior fellow of the Chief Justice Earl Warren Institute on Law and Social Policy at the University of California (Berkeley) School of Law. He is the author of Grading Education: Getting Accountability Right (Teachers College Press and EPI, 2008) and Class and Schools: Using Social, Economic and Educational Reform to Close the Black-White Achievement Gap (Teachers College Press 2004). He is also the author of The Way We Were? Myths and Realities of America’s Student Achievement (1998). 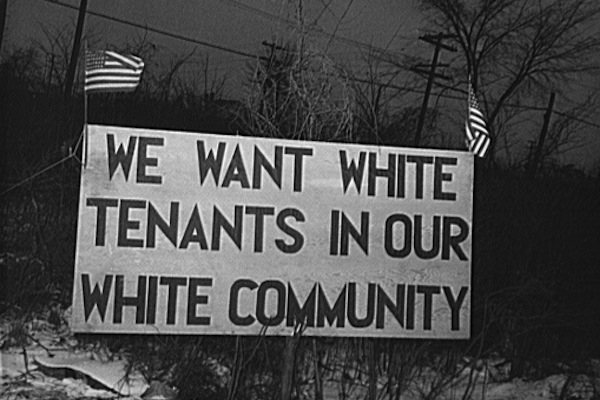 Sign opposite the Sojourner Truth housing project in Detroit, 1942. Black families in the development were the victims of a race riot in February 1942. Image via Wiki Commons/Library of Congress.

In the last two weeks, we’ve paid great attention to Nelson Mandela’s call for forgiveness and reconciliation between South Africa’s former white rulers and its exploited black majority. But we’ve paid less attention to the condition that Mandela insisted must underlie reconciliation -- truth. The Truth and Reconciliation Commission that Mandela established, and that Bishop Desmond Tutu chaired, was designed to contribute to cleansing wounds of the country’s racist history by exposing it to a disinfecting bright light. As for those Afrikaners who committed even the worst acts of violence against blacks, they could be forgiven and move on only if they acknowledged the full details of their crimes.

In the current issue of the School Administrator, I write that we do a much worse job of facing up to our racial history in the United States, leading us to make less progress than necessary in remedying racial inequality. We have many celebrations of the civil rights movement and its heroes, but we do very little to explain to young people why that movement was so necessary. Earlier this week, the New York Times described how the Alabama Historical Association has placed many commemorative markers around Montgomery to commemorate civil rights heroes like Martin Luther King, Jr., and Rosa Parks, but declined -- because of “the potential for controversy” -- to call attention to the city’s slave markets and their role in the spread of slavery before the Civil War. Throughout our nation, this fear of confronting the past makes it more difficult to address and remedy the ongoing existence of urban ghettos, the persistence of the black-white achievement gap, and the continued under-representation of African Americans in higher education and better-paying jobs.

One of the worst examples of our historical blindness is the widespread belief that our continued residential racial segregation, North and South, is “de facto,” not the result of explicit government policy but instead the consequence of private prejudice, economic inequality, and personal choice to self-segregate. But in truth, our major metropolitan areas were segregated by government action. The federal government purposefully placed public housing in high-poverty, racially isolated neighborhoods (pdf) to concentrate the black population, and with explicit racial intent, created a whites-only mortgage guarantee program to shift the white population from urban neighborhoods to exclusively white suburbs (pdf). The Internal Revenue Service granted tax-exemptions for charitable activity to organizations established for the purpose of enforcing neighborhood racial homogeneity. State-licensed realtors in virtually every state, and with the open support of state regulators, supported this federal policy by refusing to permit African Americans to buy or rent homes in predominantly white neighborhoods. Federal and state regulators sanctioned the refusal of the banking, thrift, and insurance industries to make loans to homeowners in other-race communities. Prosecutors and police sanctioned, often encouraged, thousands of acts of violence against African Americans who attempted to move to neighborhoods that had not been designated for their race.

By the time the federal government reversed its policy of subsidizing segregation in 1962, and by the time the Fair Housing Act banned private discrimination in 1968, the residential patterns of major metropolitan areas were set. White suburbs that had been affordable to the black working class in the 1940s, 50s and 60s were now no longer so, both because of the increase in housing prices (and whites’ home equity) during that period, and because other federal policies had depressed black incomes while supporting those of whites. It was not until 1964, for example, that the National Labor Relations Board for the first time refused to certify a union’s exclusive bargaining status because it openly refused to represent black workers as it did whites.

The myth of de facto segregation denies this recent history and prevents us from adopting policies to undo it. If we understood the important role that our government played in segregating our nation, we would feel a greater obligation to press our government to integrate it. But if we believe that segregation was an unintended byproduct of private forces, it is too easy to say there is little now that can be done about it.

We promote this result by mis-teaching our young people about our history. For example, in the more than 1,200 pages of McDougal Littell’s widely used high school textbook, The Americans, a single paragraph is devoted to 20th century “Discrimination in the North.” That paragraph devotes one sentence to residential segregation, stating that “African Americans found themselves forced into segregated neighborhoods,” with no further explanation of how this happened or how public policy was responsible. Another widely used high school textbook, Prentice Hall’s United States History, also attributes segregation to mysterious forces: “In the North, too, African Americans faced segregation and discrimination. Even where there were no explicit laws, de facto segregation, or segregation by unwritten custom or tradition, was a fact of life. African Americans in the North were denied housing in many neighborhoods.” History Alive!, a popular high school textbook published by the Teachers Curriculum Institute, also teaches students a distorted view by suggesting that segregation was only a problem in the South. “Even New Deal agencies,” it says, “practiced racial segregation, especially in the South,” failing to explain that the New Deal’s Public Works Administration established, for the North, a “neighborhood composition rule” in public housing (it could not alter the racial composition of a neighborhood where it was placed) or that the New Deal’s Federal Housing Administration instructed appraisers in the North to recommend denial of mortgage insurance in neighborhoods if natural barriers (rivers or highways, for example) failed to prevent the “infiltration” of “incompatible racial groups.”

Such indoctrination of today’s high school students with racial falsehoods minimizes the possibility of progress towards equality when these students become our country’s leaders. Nelson Mandela understood that glossing over the past undermined the possibility of reconciliation. It is a lesson from the celebration of Mandela’s life that we should not ignore.