Three Myths About Reagan, Debunked on His 103rd Birthday

Monica Gray is the founder of Monument Media. She holds a B.A. in American Studies and a Master of Public Policy from the University of Virginia. 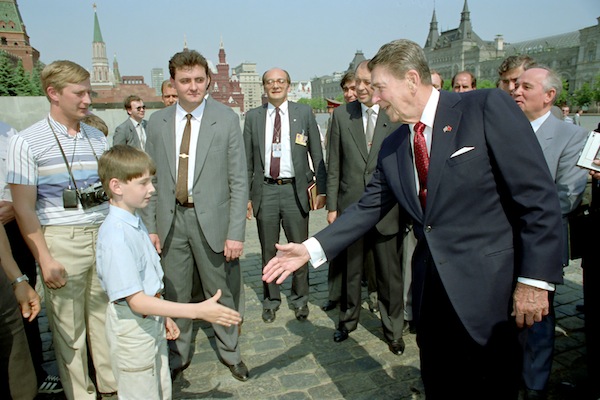 Today is Ronald Reagan's 103rd birthday. When it comes to the Gipper, there are still a few common misconceptions out there, according to my history guru friend James Graham Wilson, a State Department historian and author of a new book on Reagan and the end of the Cold War. In the following, Wilson sets the record straight on three popular myths about Reagan that he says just ain't so.

Myth #1: Reagan was an actor reading from someone else's script.

In fact, Reagan thought hard about the messages he wanted to convey. This is a relatively recent discovery. We know a lot more about Reagan's thinking than we did when he left office 25 years ago -- or even when he passed away 10 years ago. The Reagan Library in Simi Valley, California, now has extensive open collections of letters, diaries, and drafts of speeches with the president's notes on them. For instance, you can read his handwritten letters to Soviet leaders and what he wrote on their replies. Douglas Brinkley, Kiron Skinner, and Martin and Annelise Anderson have published important collections of these primary resources. They are very much worth reading, and make clear Reagan's deep and direct involvement in the policy-making process.

Myth #2: Reagan was a nuclear cowboy.

You might recall Reagan's famous gaffe in front of a live mic in 1984: "We begin bombing in 5 minutes." The truth is, Reagan actually hated the burden of nuclear weapons, was deeply fearful of wag-ing an unrestrained arms race, and wanted to abolish nuclear weapons. Critics regarded his announcement of the Strategic Defense Initiative ("Star Wars") in March 1983 as the height of cynicism. Here was a president, they said, talking about a giant shield that would actually make the prospect of nuclear war less unthinkable. The technology behind SDI was highly dubious. But the idea was very real, and very dear, to Reagan. His plan was to share SDI with the Sovi-ets so that both sides could begin to disarm. I know that sounds incredible, yet it is indeed what he pledged to both Gorbachev and his own disbelieving top advisors.

Myth #3: Reagan was a natural leader.

Even as he dreamed big, Reagan was an awkward manager of people, and a remarkably passive chief executive. He rarely gave clear orders to his subordinates, and he loathed any personal confrontation. Phil Hartman on Saturday Night Live portrayed the president barking orders as soon as the Girl Scouts left the Oval Office. Reagan did not actually command his national security team that way. This style of leadership, as we know, led to Iran-Contra, the revelation of which at the end of 1986 was the low point of his presidency. Reagan's unyielding optimism about what Americans could achieve, however, set the terms for big debates in the 1980s and paved the way for the INF Treaty, which he and Gorbachev signed in 1987, and which eliminated an entire class of nuclear weapons.

If you’re interested in learning more about Wilson's new book, check out this video: The Triumph of Improvisation: Gorbachev's Adaptability, Reagan's Engagement, and the End of the Cold War.

*The views expressed here are those of James Graham Wilson and do not necessarily reflect those of the Department of State or the U.S. Government.