The Invisible War Against Rape in the U.S. Military 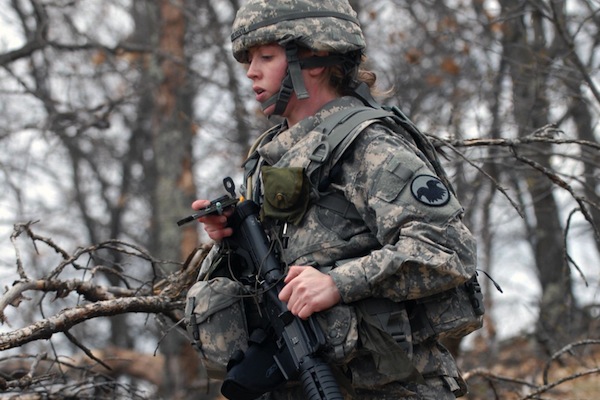 Many young women who join the military are idealistic, patriotic and ambitious. The military promises education, training, a possible career and the adventure of deploying to foreign lands. Even though military life requires serious sacrifices, most believe that the American military’s Uniform Code of Justice is fair and equitable.

Then reality upends their lives. Male colleagues subject them to humiliating initiation rituals, and grope their breasts and bottoms. Three soldiers gang rape a female soldier. A commanding officer holds down a woman as he threatens her with a charge of adultery -- which would end her military career and send her to prison -- if she tells anyone.

This is the Invisible War, the title of a 2012 film about sexual assault in the American military. Stories of sexual assault have been in the news for several years. Last June, all twenty women in the U.S. Senate sat down and decided “enough was enough.” Women, they argued, should not have to fear their officers and male counterparts as well as foreign enemies. Senator Kirsten Gillibrand, the junior Democratic senator from New York who replaced Hillary Clinton, resolved to change what they all agreed was obscene and illegal. And the women decided that no matter how many bills they might individually sponsor, they would band together and engage in civil discourse, which they did.

For nearly a year, Kirsten Gillibrand campaigned all over the country to promote what was commonly called the “military sexual assault bill,” arm-twisting senators, and publicizing the stories of sexual assault women experienced in the military. The Pentagon, she repeatedly told audiences across the nation, estimated that 26,000 soldiers, mostly women but also men, had experienced sexual assault in 2012, based on an anonymous survey.  Most soldiers, however, had declined to report the assault to their commander and in about a quarter of the cases, he was the rapist or abuser. Even reporting sexual assault was a career breaker. A commanding officer had the power to say nothing had happened, and could decide not to prosecute those who raped or sexually assaulted soldiers under his command. The Pentagon requires Congress to supply them with annual reports about sexual assault and recently revealed that sexual assaults had increased by 50 percent from 2012 to 2013.

Clearly something had to be done, and Sen. Gillibrand thought carefully about the best way to address sexual assault in the military. Her specific legislation allows an accusation of sexual assault to bypass the chain of military command and go straight to an independent review. Gillibrand’s reasoning was that sexual assault cases are often perpetrated by someone in the chain of command, ensuring that either revenge or the end of a woman’s military career is the response to any complaint.

After months of highly visible public discussion and debate about the extent of sexual assault in the military, the Senate was finally ready to vote on Gillibrand’s challenge to military culture in early March, 2014. Until the very last moment, no one could predict the outcome of the vote. Senators kept trading votes back and forth in a frenzy of political deals about other matters that had little to do with the military. On March 6, the day that the vote took place, Gillibrand said on the Senate floor, “The people who do not trust the chain of command are the victims, That breach of trust, that fundamental breach of trust has been broken for victims of sexual assault.” The suspense grew, and finally the Senators voted. Gillibrand’s bill lost by five votes.

One of Gillibrand’s most powerful and vociferous opponents -- aside from Republican war hawks who bristle at any challenge or change to the military -- was Sen. Claire McCaskill, a Democrat from Missouri, who had offered a competing bill which had also been discussed for months. Seventeen of the nineteen women senators who had gathered last June voted to support Gillibrand’s legislation. Like her, they felt that commanding officers could not fairly deal with accusations of sexual assault.

But when Gillibrand’s bill failed, they kept their bargain to vote together. They knew that even if Gillibrand’s had passed the Senate, House Speaker John Boehner almost certainly would not have allowed a House vote on the legislation, which is his privilege in his role as House Speaker. The truth is, Gillibrand and most of the women Senators had aimed straight at a macho military culture, and most male senators wanted change that did not challenge the military chain of command. Claire McCaskill made it easier for them to achieve this goal.

Sen. Claire McCaskill had promoted weaker legislation, and on March 10 her bill was passed overwhelmingly by 97-0 votes.  It will now go to House, where it is expected to receive bipartisan approval.

McCaskill defended the weaker legislation she had proposed. As a former prosecutor, she said, “I have more experience prosecuting sexual assault cases than anyone in the Senate. I have spent more time holding the hands of rape victims,” she told Gillibrand’s supporters. “This bill does not let anyone off easy.”

And she’s right that her legislation will, in fact, improve the lives of women in the military. According to a Time magazine analysis of her legislation, “When a case is reported, if either or both the commander or prosecutor don’t want to proceed, the case is referred to the head of that military branch for review.” McCaskill’s bill also eliminates the “good soldier” defense that astonishingly allows the impeccable record of a soldier to be used as evidence that he could not have committed such an atrocious crime. Significantly, it requires that every commander’s record of handling sexual-assault cases will now be considered when he is eligible for promotion.”

Congress is genuinely embarrassed by the extent of sexual assault in the military. It is “conduct unbecoming a soldier” and also makes recruiting women more difficult. Without a military draft, the American military actually needs women within its ranks. McCaskill’s bill gave senators an opportunity to back something substantive on sexual assault, without really challenging the macho chain of command system that has destroyed the lives of thousands of women in the military.

But why would a Democrat who has prosecuted so many rape cases fight for weaker legislation?

First, McCaskill correctly assessed that her weaker legislation had a greater chance in both houses of Congress. Some have also noted that McCaskill was considered the “most endangered” Democrat in the U.S. until her opponent Todd Akin stuck his foot in his mouth and began babbling about “legitimate rape” and how women’s bodies would naturally repel the sperm of rapists. That ensured her victory as a Senator in Missouri, which had increasingly become a reliably Republican state.

It didn’t help either that President Obama, who has often condemned the military for its shameful record of sexual assault, offered Gillibrand no support. Gillibrand later said that the president could have helped tip the scales in favour of her proposal. As commander in chief, he could have implemented serious reforms. But he didn’t.

Another reason for McCaskill’s competing and weaker legislation may have to do with politics. It’s “the 2016 factor.” Gillibrand is widely seen as a Democratic presidential contender if Hillary Clinton declines to run as a presidential candidate. She is a feminist who has made improving women’s lives the focus of her political legislation. Claire McCaskill, on the other hand, is considered a “war hawk,” particularly towards Iran. Many think that McCaskill wanted to undermine a rising female star in the Democratic Party.

The effort to halt sexual assault in the military is arriving in slow, but steady changes. Last year, outraged Democrats and Republicans changed the Uniform Code of Military Justice by stripping commanders of their ability to overturn military jury convictions. This was an enormous victory for women in the military.

Decades ago, sexual harassment and assault were as common as a coffee break in American civilian life. But then the women’s movement, in the 1970s, redefined them as crimes, as well as a violation of a woman’s civil right to earn a living. By the 1990s, sexual assault and sexual harassment had become illegal. Soon, every institution had a sexual harassment officer who adjudicated accusations.

The military, with its macho culture and adherence to the chain of command, still tolerates sexual assault and violence. Think about it. How could it be different? Soldiers are trained to engage in impersonal violence and to become killing machines. This is their job. Compared to their training, sexual assault may simply seem to some like rest and recreation, rather than as criminal behaviour.